Dickerson Takes Over at Fort Gibson

Texas pro in front by more than 3 pounds 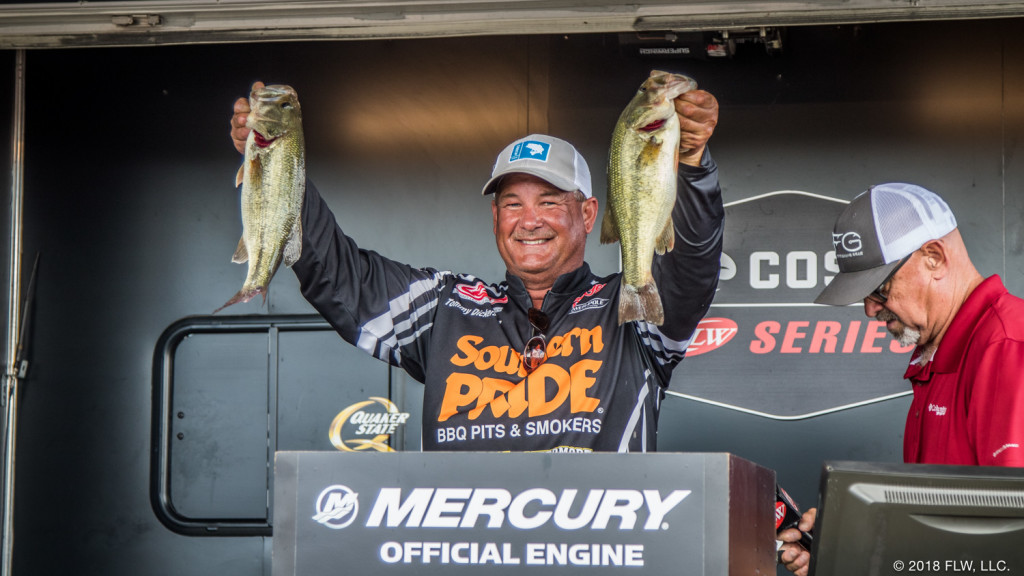 Even before the Costa FLW Series Southwestern Division event presented by Mercury on Fort Gibson began, the mantra “find something off the beaten path” became the dock talk buzz term. But on a lake like Fort Gibson, what exactly does that mean?

Tournament leader Tommy Dickerson of Orange, Texas, has demonstrated his way of getting off the beaten path for two days in a row by literally getting as far away from Fort Gibson’s main track as possible. Each day Dickerson has run far up the river, then run far back into a creek, and then literally shimmied his boat over and in between rocks and submerged logs to access the last mile of the creek.

His determination to get past the shallow obstacle course has paid off handsomely with catches of 14 pounds, 7 ounces and 12 pounds the past two days for the tournament lead of 26-7. Despite his best efforts to ditch his competitors, Dickerson is not alone in his quest. He is sharing his coveted creek stretch with tournament veteran Cody Bird who is in third place. Bird, too, has to traverse the shoals to get past the shallow area. Due to dropping water levels, both anglers have been working together to make sure neither one gets left behind when re-crossing the shallow stretch in the afternoon.

The productive creek has plenty of water to float boats except for one area under a bridge where perhaps an old ford used to exist. For a span of some 20 or 30 yards the creek shallows up and is littered with a tangled web of rocks and logs. Due to the muddy water, the obstacles cannot be seen, only felt as the two pros use only their trolling motors and weight shifting to literally drag their hulls through a series of narrow crevices in the shoals. Boat scratches are unavoidable in this section. Once through the treacherous area, the creek’s depth returns to 2 to 4 feet, allowing them both to fish another mile or so. 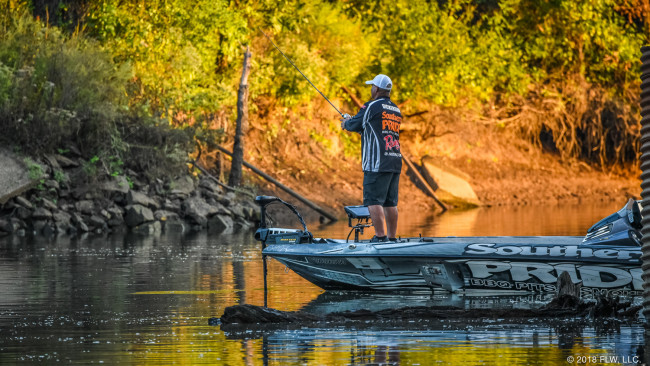 The two anglers have reached a gentlemen’s agreement about who gets to fish which stretch above the shoals. But both are concerned that if the water drops any farther, neither one will be able to get in tomorrow.

“It was pretty bad getting out of there this afternoon,” Dickerson says. “If we lose another 4 or 5 inches overnight I don’t know if we can make it in there tomorrow.”

“Most of the targets I’m fishing I can’t even see,” he says. “I just roll that spinnerbait down the middle until I hit something.”

Dickerson had to work a little harder to complete his limit today. Yesterday he had 14 pounds, 7 ounces by 9:30 a.m. Today, it took him until 1:30 p.m. to secure five keepers. Obviously, he is nervous about the water level dropping, but he feels like if he can get in there tomorrow, he can catch five more to close out the win. 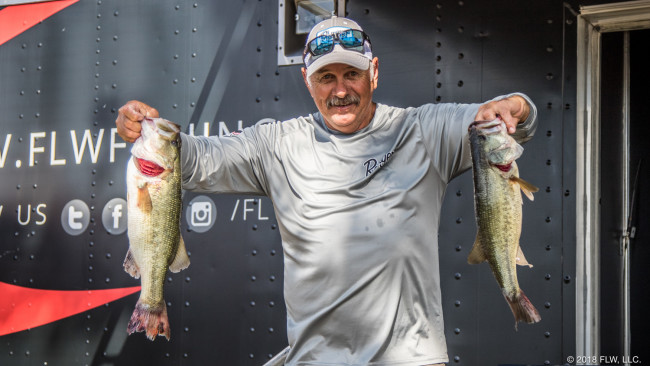 Johnny Burke of Bristow, Okla., leads all co-anglers with a two-day total of 15 pounds, 12 ounces. Burke fished with pro Brandon Mosley of Choctaw, Okla., today to catch three bass weighing 9 pounds, 6 ounces to put him in the lead. He enters Saturday’s final round with a leading margin of more than 5 pounds.