A bunch of ways to fish Guntersville grass in the fall 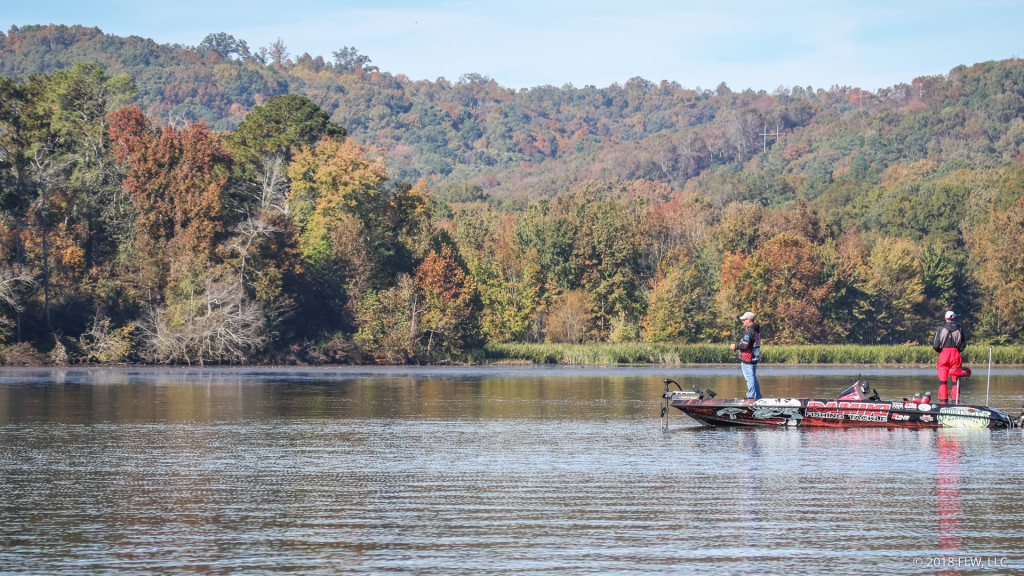 Just about any imaginable way to fish grass worked to some extent at the Costa FLW Series Championship on Lake Guntersville, with varying degrees of success. Tournament winner Kyle Walters spent two days punching 1 1/2 ounces of tungsten and a beaver-style bait through mixed mats of hydrilla, milfoil and chopped up eelgrass, capping off the tournament with an impressive 24-pound, 4-ounce limit.

Walters spent his tournament upriver by the BB Comer Bridge. While some in the top 10 fished nearby, overall the top finishers were pretty well spread out across the lake.

Aside from figuring out grass patterns, contestants in the championship had to deal with heavy pressure from another championship derby and major weather swings. Day one was cancelled due to the threat of severe storms, so the entire field fished Friday and Saturday. On day two, windy, overcast conditions forced many anglers to adjust. The wind died and the clouds lingered on Saturday, eventually parting and giving way to a beautiful autumn day on the water.

Dealing with all those factors was a challenge suited for a championship event. Here’s how the top finishers got it done. 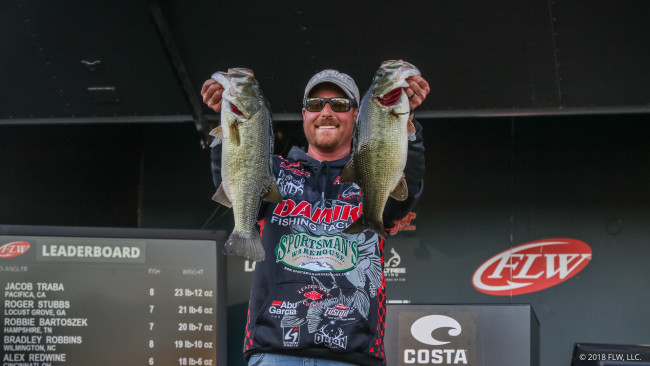 For the second time in three years, Bryan Thrift came up one spot shy of a major tournament win on Lake Guntersville. The last time was the 2017 FLW Tour event, when Mark Rose made some late-day magic to edge Thrift for the victory by less than a pound. This week, Thrift’s runner-up finish at the Costa FLW Series Championship might be a little easier to stomach because Walters didn’t really make it close.

In typical Thrift fashion, he was somewhat elusive with the details. The best bass angler on the planet spent most of his time mining two shallow grassy areas with an umbrella rig for limits of 18-3 and 21-5. Most of his bass came out of water that was 2 to 5 feet deep. The key, he says, was to stay put on key areas and not waste time running around and having to dodge other anglers competing in the championship and another major derby on the lake.

“I fished grass that had bait on it,” he says. “It really didn’t matter where it was, as long as it had shad on it.

“The biggest key for me was staying in one place. Today [Saturday], I started in one place and didn’t crank the big motor until 2 o’clock.”

His best area was about 400 yards long. He never saw any bass schooling, but once he located shad, Thrift knew he was in the right place and was able to grind out his daily limits. 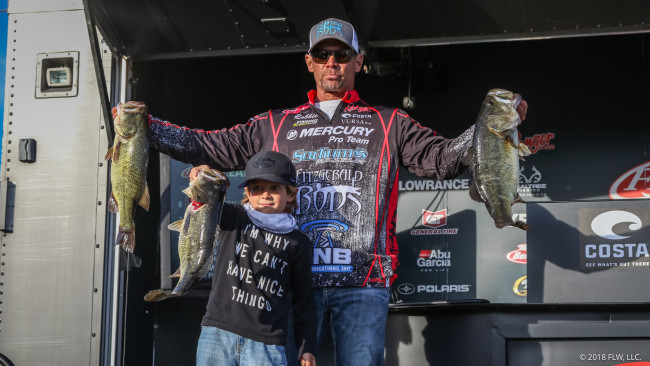 Robert Crosnoe is another Florida hammer who worked the same pattern as Walters. In fact, they shared information in practice and wound up sharing some of the best water. What kept Crosnoe off the winning pace was a tougher first day, when he weighed just 14 pounds. He says he spent too much time bouncing around when he should’ve buckled down on the juice.

“Yesterday [Friday] the weather hurt me bad,” he says. “We were punching mats up the lake around the Goose Pond area. That rainy weather didn’t put them in the mats good.”

“Yesterday, I fished a lot of other stretches and didn’t spend enough time there [by BB Comer],” he says. “Today I never left it all day.

“It started game on from start to finish. I didn’t have a lull. We [he and Walters] basically fished opposite ends of the best stretch. We’d sort of meet in the middle and then turn and work away from each other. I knew he had a chance to win, so I let him have his best stuff.”

The juice was a stretch of mat that consisted of hydrilla and milfoil with blown-in eelgrass on top, located on the backside of a grass bed that grows on a ridge running parallel with the main river channel

“I targeted wherever it was the thickest and brown,” he says. “You couldn’t fish the green eelgrass. They were all concentrated under the brown. It might have been a heat [retention] thing. And you couldn’t fish where the hydrilla was growing [still green].”

He says bass were funneling down a ditch located between the mat and the bank, and being pressured into the edge of the mat by other anglers. 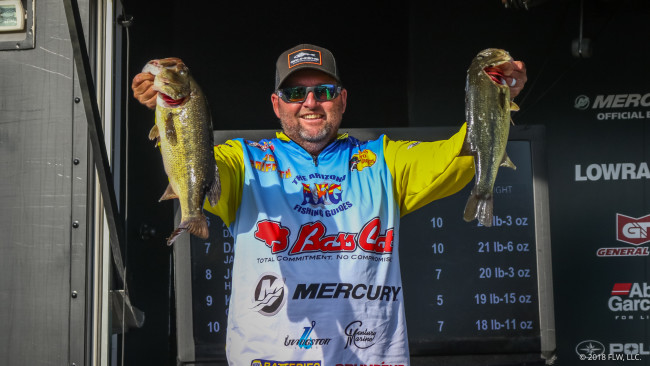 Though he didn’t win the tournament, Arizona’s Jon Griffith still came out a winner at Guntersville as the top-finishing Western Division pro, which earned him a spot at the 2019 FLW Cup.

Griffith threw a homemade white vibrating jig with a silver blade and an Arizona Custom Baits AFG Force swimbait trailer over boiling fish. By the final hours of the tournament, he was so dialed in on that bait that he put all his other rods away to remove temptation.

“We didn’t catch them when they boiled,” he adds. “We’d catch them over grass in 3 to 4 feet. The surrounding water was 10 feet.”

After the fish came up boiling at the surface, they quickly retreated to the grass, where Griffith worked on them.

Staying put and grinding it out were the keys to a top finish. 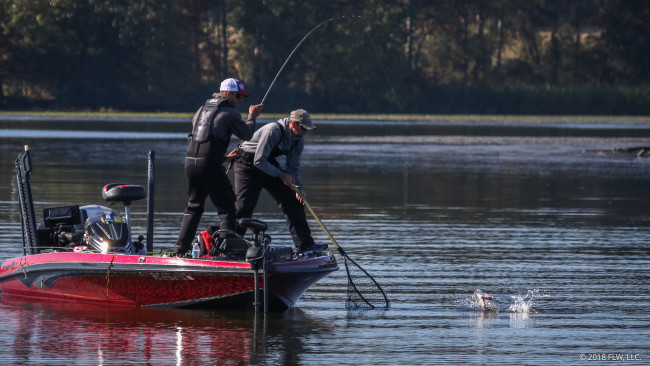 5. New grinds in the grass

Bryan New is one of the sport’s rising stars and is already an FLW Tour-caliber performer. The North Carolina angler has spent several years traveling and fishing with Bryan Thrift, and the two anglers fish a similar style and even wound up on the same pattern this week. They shared water, too.

“I had a tough practice,” New says. “I knew I was doing the right thing to win the tournament, but it was a tough bite. I was not getting a lot of bites.”

New fished in milfoil with a 5-inch Zoom Swimmer rigged with a weedless hook in water that was 2 to 5 feet deep, and worked the outside edges of the grass in 4 to 10 feet with an umbrella rig fitted with 3.8-inch Keitech swimbaits.

He located about 15 places in practice – points and other structure with milfoil – but only fished 10 of them in the tournament.

“I was not catching them when they were schooling, but that’s how I knew they were there,” he adds.

New only landed four keepers on Friday for a 10-15 total. He says he ran around too much that day and wound up locating a good wad of fish in the afternoon. A rash of lost fish that prevented him from filling his limit held him back from a run at the top spot. On Saturday, staying put and grinding it out made all the difference as New brought in a limit worth 19-1.

“Today I got in a place and spent, like, four hours instead of an hour and a half,” he adds. 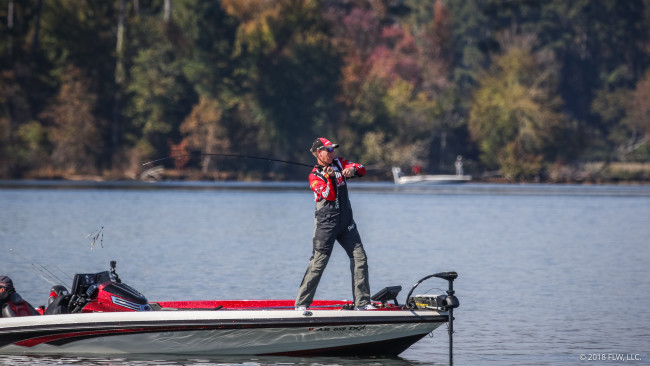 Arkansas pro Troy Gibson had a really rough start to the championship. At 1 o’clock on Friday, he didn’t have a keeper, despite locating seven groups of fish in practice. He managed to grind out a limit for 15-7 and follow up with 13-14 on Saturday to stay in the top 10.

“I was fishing ditches – depressions,” he says. “I was hoping all the pressure would push them out of the grass.”

He was on the right track, but had to refine the approach to make his fish bite.

“They weren’t in the middle of the ditches like in practice,” he says. “They were in the edges moving up,”

Gibson caught most of his keepers in 10 to 12 feet using 4-inch Zoom Swimmers on an umbrella rig. At one point, his rig hung up in the grass and Gibson popped it free. The sudden movement triggered a bite, and he spent the rest of Saturday fishing it “like a spinnerbait,” burning the rig across the grass and making hundreds of casts in the key areas. 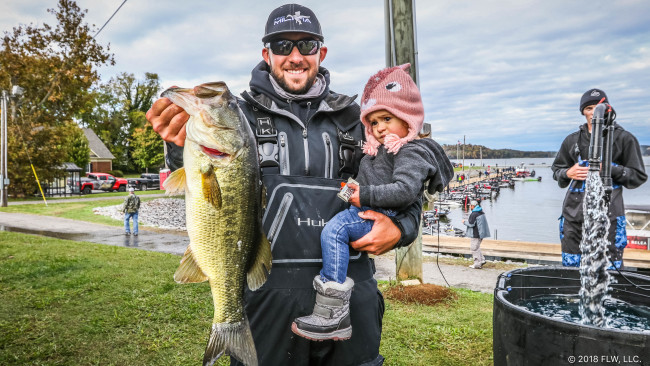 “I found some fish out on the outside edge of the grass on the main channel that I thought I’d be able to catch better,” says Birge, who fished up the river in the “miracle mile” area.

The shift to the outer edge, which was opposite of many of the other top finishers, was somewhat by necessity (he wasn’t getting bit on the inside or middle of the mats) and somewhat a strategy to get away from fishing pressure.

Birge fished parallel to the grass in 8 to 12 feet of water alongside 25-foot depths with a 5-inch swimbait and BOOYAH Flex 2 square-bill crankbait in the smoke shad color. That pattern worked just about anywhere he went, and he refined it by targeting small ditches, depressions, cuts or other current breaks along the grass line. On Saturday, he switched to a YUM YUMbrella Flash Mob Jr. umbrella rig.

“I rotated grass patches on flats in about 3 or 4 feet of water,” Tucker says.

The flats were located just off the main lake.

“I was just looking for little clumps [of grass],” he adds.

His presentations required ripping the spinnerbait through clumps and burning the buzzbait.

“On the buzzbait, I was just fishing as fast as I could,” Tucker says. “They couldn’t stand it.” 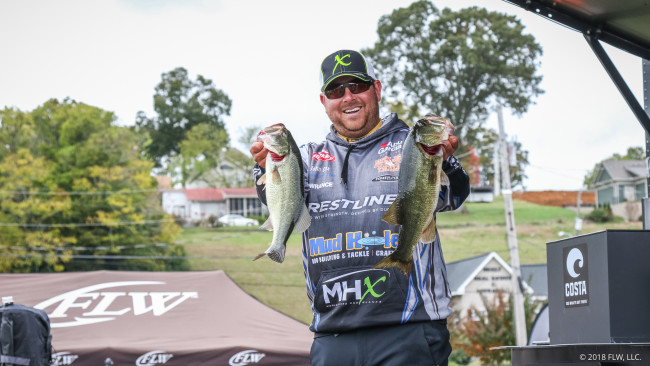 Shallow bass in grass is a recipe for a John Cox top 10, and he made it happen this week on a lake that really hasn’t been too good to the Florida pro.

Cox, who battled a nasty cold throughout practice, found one area near Goose Pond that produced most of his catch.

“Yesterday [Friday] I caught them throwing the Berkley PowerBait Jerk Shad [in white],” he says. “I sat in the same spot and made the same cast over and over.”

Cox located the fish when he saw them school. They were positioned on a small depression in a flat and were transitioning through the area. He fished the Jerk Shad on an MHX Elite-X NSJ842 7-foot, medium-light spinning rod.

“My co-angler asked me why I didn’t throw my frog there. I was like, ‘I don’t know.’ So I threw it and caught two good ones. Then I was mad I didn’t throw it all day.” 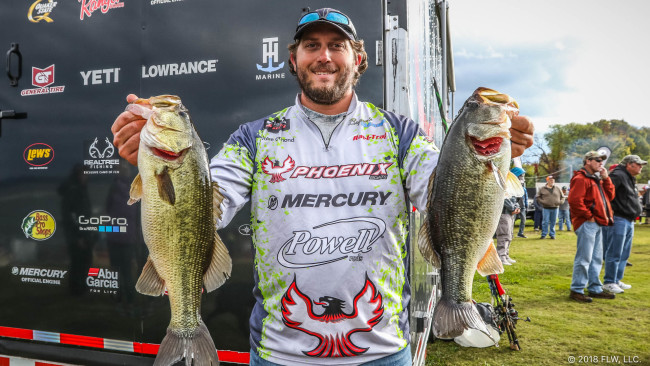 10. Ormond also camps on one spot

Like Cox, Jake Ormond made the top 10 mostly by fishing one small area.

“I was keying on a clean hole in the grass about 50 yards long and 20 yards wide,” he says.

The only keeper he weighed in that didn’t come off that spot – an 8-foot-deep area in a creek – was a 4-pounder Ormond caught the final day.

The Louisiana pro shifted around the open hole and attacked it from various angles.

“I had a backup plan 30 miles up the river,” he adds. “I ran up there today [Saturday], caught a fish and then came back.”

When he got back, Ormond expanded his primary spot a little bit by working parallel to the bank in about 8 feet of water. A 4-pounder came up schooling, and he fired his umbrella rig at it and scored.