It’s been slow going so far, but the afternoon window should be opening soon 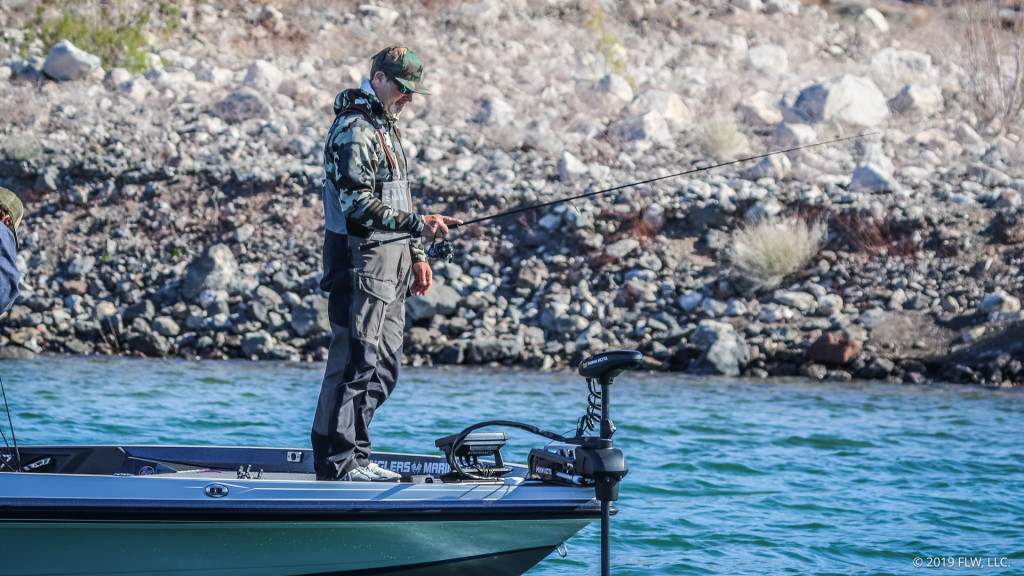 As expected, the fishing has been pretty slow so far on day one of the Costa FLW Series Western Division opener, presented by Ranger Boats. On the bright side, it seems like the bite has picked up between 10 and 1 o’clock during practice this week, so we should be seeing more fish in livewells across the tournament field in the next couple hours.

Joe Uribe Jr. started off his morning with a small keeper fishing a Neko rig not far from takeoff. His goal was to stay out of the whipping wind early on, and he managed to tuck into a few cuts to do just that.

Chris Costello also managed to get one in the box while FLW media was shadowing him, though his was of the bronze variety. There are some quality smallmouths in Mead, and while Costello’s wasn’t a giant, he seems to know of some decent spots to track down more.

Mark Lassagne got on the board with a camera crew on his tail as well. He’s primarily fishing rocky points with a drop-shot, an umbrella rig and a Duo Realis crankbait. That crankbait produced his first keeper of the day that appeared to be about 3 pounds.

Finesse tackle on spinning rods has been the ticket so far. Several co-anglers are opting to pitch jigs behind their spinning rod-wielding boaters, though few have reported any catches to this point.

While a five-fish limit may prove to be a ticket to the top of the leaderboard on day one, catching big fish never hurts. Douglas Jones caught a reported 6-pounder not too long ago — the first really sizeable fish we’ve seen to this point.

Wind was expected to be a big factor today, and that’s certainly been the case so far, but forecasts are calling for even gustier conditions this afternoon. We’ll see how much that wind affects how and where anglers are fishing. Mead can produce some brutal boating conditions. For guys fishing the Overton Arm and beyond, shutting it down early to get back to the ramp in time for check-in could be a bit of a task.