White Leads with 28-11 on Chickamauga

Tennessee pro starts off strong on a slightly tough day 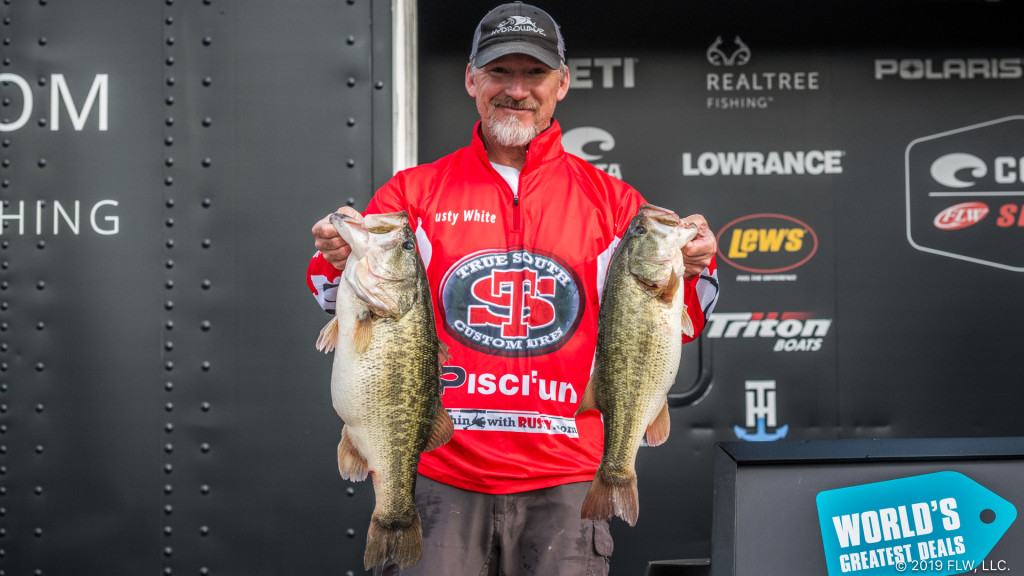 Overall, the fishing wasn’t quite what some expected out of Chickamauga on day one of the Costa FLW Series Southeastern Division event. However, even a slightly off Chickamauga is really impressive, and Rusty White of Harrison, Tenn., put it to them to the tune of 28 pounds, 11 ounces to take the day-one lead. The event, which is presented by T-H Marine, still produced a ton of big fish, with an 11-plus-pounder taking Big Fish honors on the co-angler side and a 9-plus leading on the pro side. Behind White, Cody Nichols and Steve Stanfill both cracked the 25-pound mark, and a total of 12 pros managed better than 20 pounds.

As is often the case on the Tennessee River, White did the bulk of his damage off one spot. Though he is running a pattern, the big ones aren't everywhere.

“Personally, I think these fish are moving,” he explains. “They’re staging up. They’re coming. I’m fishing transition places. These are places where they’re coming through. I just stay with it and stay after it.”

White is fishing shallow, and he’s doing it with an unspecified lipless crankbait of varying colors. He had to adjust his color selection as conditions changed throughout the day, which happened pretty frequently on Thursday.

Though he's fishing other areas, one spot is the juice.

“There’s one particular place that’s got some big fish on it,” he says. “I can go other places and catch fish doing the same thing, but that particular place has big ones on it. I caught all but one there.

It’s fortuitous that White found a spot that keeps producing given his limited time on Chickamauga over the last few days – which was by design for the local who moved to the area about two and a half years ago.

“I didn’t practice [much] this week,” White adds. “I came out Saturday and Sunday, and then I came out yesterday, just because I knew there was going to be a bunch of boats out and I didn’t want to mess up my confidence. I basically just stayed away from it.”

Confidence can be hard to come by when anglers are catching bunches of 8- and 9-pounders everywhere on the lake, and knowing the competition is going to get its share of big fish is an element of this tournament that could have an adverse effect. White stayed away from that, and, being a local, he’s familiar enough with Chick to know what works and what doesn’t.

It also helps to weigh in some huge fish, which White did on day one. One fish in particular put his one-day total over the top: a 9-pound, 6-ounce behemoth that White was apprehensive to overestimate.

Asked if his spot is good enough to keep producing on day two, White pointed to the uncertainty of whether or not he’ll be able to get to his spot before other boats in the morning.

“If I can get to my starting place, I think I can do 20 again,” he estimates.

And if he does, there’s a good chance he’s fishing near the top of the leaderboard on day three as well. 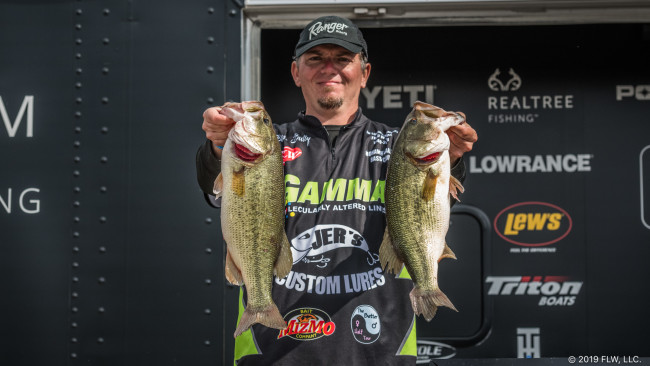 Doug Iorio II is a terrific angler in his own right, but part of being a successful co-angler is also having a boater who can put his fishing partner in the right place at the right time.

Iorio certainly had that in Steve Stanfill, who enters day two in third place with 25-1. The latter cracked a big bag, but his co-angler came awfully close to weighing in just as much with 22 pounds, 3 ounces.

“[Stanfill] has just got an area that they’re coming to hot and heavy,” Iorio says. “He was in the right spot.”

Still, being there and catching fish are two entirely separate things, especially when you’re on a body of water that’s fairly unfamiliar.

“This is only the second time I’ve been here,” he explains. “I came down as a co-angler when they had the Tour here. I didn’t do so bad at Okeechobee (in the first Southeastern event), so I kind of feel like I’m still in the hunt to make the Championship. Last year in the Championship I finished fifth as a co-angler.”

In this tournament, making another top 10 will come down to adjustments. The weather is changing every day (along with water levels), and Iorio will have a different boater on day two. But on Thursday, his adjustments were good enough to get the job done in a big way.

“[Stanfill] is throwing something slightly different,” he says. “I’m just trying to catch the ones he’s not. I’ve got one bait that’s working for me that’s been working for me all week. That’s really it. I caught all but one of my fish on that one bait. It’s the most basic thing. I think everybody is throwing it.”

What that bait is remains a mystery, but it certainly did the job.