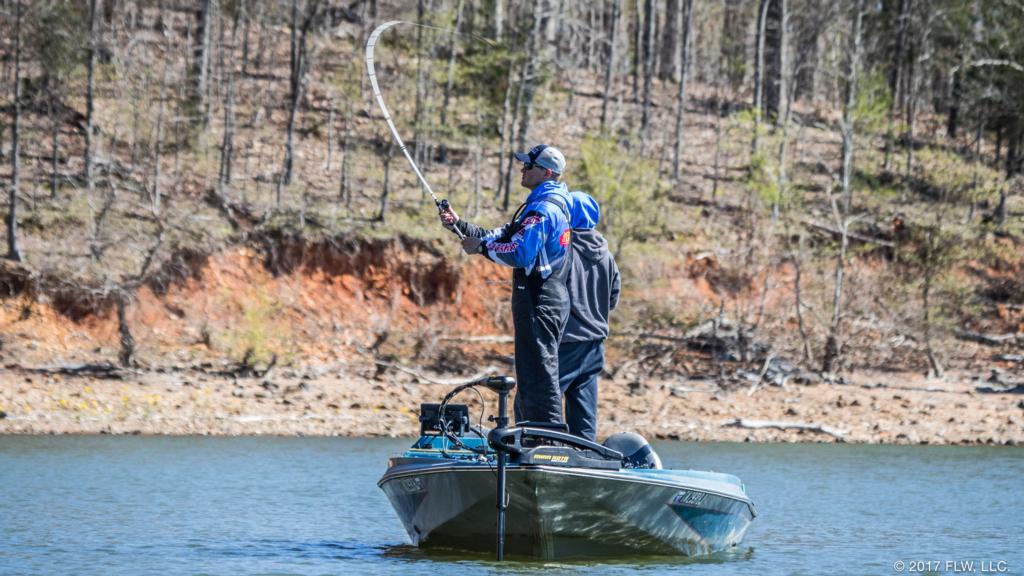 Kentucky Lake and Lake Barkley are different animals in April than they are in the months of May and June, when most major multi-day tournaments usually visit the region. Instead of droves of postspawn bass piled onto ledges, April is a month of transition – from prespawn to the beds.

Costa FLW Series Central Division pros will find out firsthand this week when they open the season on the expansive waters of the Kentucky/Barkley fishery April 4-6. The tournament is presented by Lowrance and hosted by the Kentucky Lake Convention and Visitors Bureau.

The last time the FLW Series visited Kentucky Lake in April was 2016, but that event was held at the end of the month. The winning fish were spawning up around flooded buck brush way south past New Johnsonville, Tenn. This week’s tournament is not only several weeks earlier, but the water will be at winter pool, and the lakes have changed immensely since 2016.

So far this spring, tournaments on Kentucky have churned out impressive winning stringers of prespawn chunks. There’s a lot of optimism in western Kentucky and Tennessee, but there are still challenges to tackle in the Tennessee Valley.

Here’s a look at what’s going on, and what we can expect in the Central Division opener.

Blame it on the carp, blame it on the lack of grass or blame it on several years of poor spawning class recruitment, but Kentucky Lake (and Lake Barkley) is not the same lake it was 10 years ago. The consensus among local pros is that there are giants in the lake – and plenty of them – but the swarms of 2- to 3-pounders that used to clobber every crankbait in sight are absent. The fishing isn’t as easy as it used to be.

“If you get a bite it’s a good one,” says former FLW Tour pro Brandon Hunter, who guides and operates instructional electronics classes on Kentucky Lake (brandonhunterfishing.com). “You’re going to see some big bass caught by those guys at the top, but you’re going to also see two-fish bags that weigh 8 or 10 pounds.

“You ought to be able to put a crankbait or a Rat-L-Trap in your hand and just run around and have fun this time of year. The frustrating part is if you’re not getting bites, it’s hard to put anything together. I really think the guys that kind of know the lake are going to do good in this tournament. The guys that come from out of town aren’t going to be able to put an A-rig or a crankbait in their hand and run around and just have fun like you should.”

Kentucky Lake is known for its postspawn ledge bite, but the 162,000-acre reservoir has so much more going for it than idling, graphing and chucking offshore baits.

It’s a tremendous power-fishing lake in the spring, even when the water is low like it is now. There’s also a lot of water for pros to spread out and fish.

It’s likely anglers will be targeting water from Kentucky Dam in Gilbertsville, Ky., clear past New Johnsonville, Tenn., some 70 miles away. Lake Barkley, which connects to Kentucky by a canal up on the north end, will also be a big factor.

“To be honest, I’ve been saying since the schedule came out with the tournament the first week of April that the Barkley guys are going to be a factor in this tournament,” says Hunter. “Sometimes it’s hard to catch them two days in a row over there, but if there’s a month in the calendar year that it could be won on Barkley, April is that month. I think there’s a number of local guys that’ll spend their time over there.”

Strong southerly winds and storms in the forecast for the beginning of the tournament could drive more anglers to Barkley, as the run south on Kentucky Lake can be treacherous when the wind blows from the north or south.

Spring in western Kentucky and Tennessee has been a mix of lion and lamb. Recently, warm, stable weather has been very welcoming to anglers in the region, and the number of crappie and bass boats in the parking lots has increased about as fast as the number of buds and blossoms opening up on the trees. Then, over the weekend, the temperature dropped below freezing a couple of nights, which set back the water temperature a little bit.

This all comes on the heels of what was a very wet and rainy stretch in late February and early March that caused Kentucky Lake to jump from winter pool at about 354 feet up to 367, which is about 8 feet above summer pool.

Lake managers pulled the plug and let the water out as fast as they could, and it’ll be right back at winter pool for the tournament.

“I figured after a week of the water settling down it would get pretty good,” Hunter says. “I think the biggest problem now is they have shut the water completely off, so they’re not pulling much current at all. What few fish had moved up would typically bite a crankbait or something winding the bank. That stuff has kind of gone away because the water’s still; it’s not moving much.”

Hunter reports that the water clarity is close to normal, with a few areas experiencing very clear water and others still murky. Water temperatures vary from one area to the next, but most are in the mid- to upper 50s already.

Overall, conditions are pretty good for the season. There’s a front headed for the region on Thursday, but the forecast isn’t calling for a major cooldown. Lows are expected to be in the mid- to upper-50s, with highs climbing from the low-60s to mid-70s throughout the tournament.

It’ll be windy, which will make it tough to travel and fish offshore, but the conditions shouldn’t shut the fish down.

What to expect on the water

At the YETI FLW College Fishing Open event in mid-March, the field hit Kentucky Lake at the perfect time. Fish were piled up in staging areas, and the anglers caught a bunch of 20-plus bags, mostly by fishing out off the bank. Hunter expects similar patterns, plus a number of others, to be in play at the Costa FLW Series event.

“There’s a good number of fish still out that can still be caught offshore, and some moving up,” he says. “There’ll be guys out in the middle, up on the bank, back in the creeks, and a good number of guys will go to Barkley to get away from the wind and the pressure.

“I’m excited about it,” Hunter adds. “We get to see it at a different time of year besides June.”