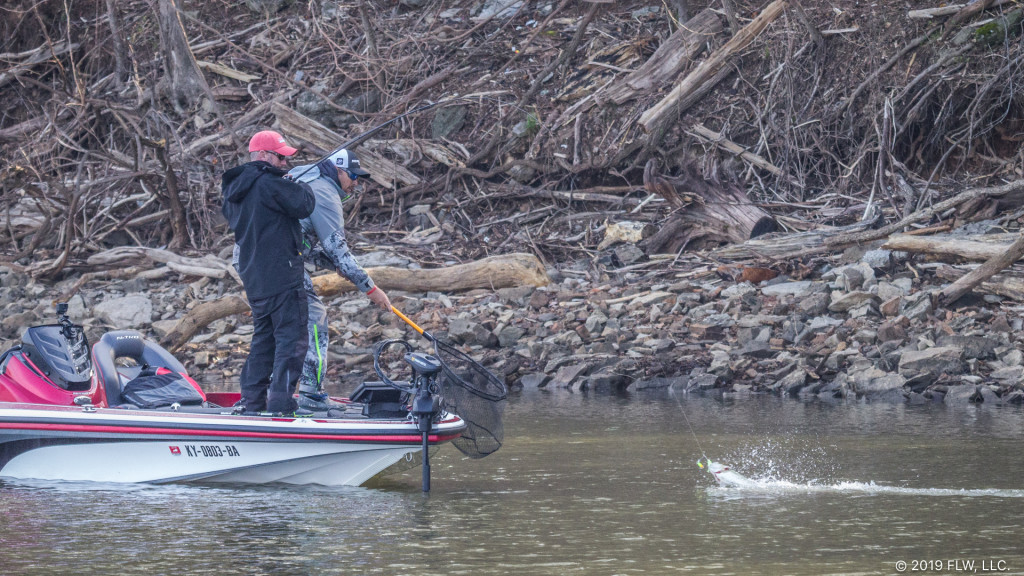 Question marks are about the only certainty for day three of the Costa FLW Series Central Division event presented by Lowrance on Kentucky Lake, as the top 10 pros scattered and left us lean on details on a day where changing weather could see changing fortunes.

After two dreary days of cloudy, dim conditions, the final round brought lots of the bright, sunny stuff that pushes fish tighter to cover and makes them easier to target. Also, considerably more warmth may very well put the giddy-up on seasonal progression. No one’s getting too crazy with visions of heavy bed-fishing, but accelerated prespawn movement is certainly possible.

Interestingly, seven of the finalists started their day with runs to Lake Barkley. The smaller, more riverine lake is known for holding quality fish and a considerably smaller playing field compared to Kentucky Lake’s vastness.

We twice visited Jake Morris, the McKee, Ky., pro who has led for two days. He returned to Barkley’s Goat Island area, where diligently working a classic prespawn staging bank with a mix of rock and wood delivered two keepers for about 5 1/2 pounds by noon. A chartreuse spinnerbait has delivered most of his fish this week, but he’s occasionally pausing to pitch prominent wood features.

Cole Floyd, who worked his way up to second place yesterday, began his day near Paris, Tenn., on Kentucky Lake, and after a slow start, he began to wonder if he should’ve gone to Barkley. Floyd says he needs wind to fire up the fish on his main-river spots, but since today the lake is slick calm, he’s picking around gravely points, shallow “ponds” off the main lake and lead-in banks in the creeks. He had a couple of keepers by 10 a.m., but definitely needs to pick up the pace.

Jimmy Washam left his primary spot in Eddy Creek early today, but we weren’t able to catch up to get an update. Dan Morehead and Steve Floyd both ran far south on Barkley, beyond the range of our reporters. And poor cell service made it difficult to track Chris Jones, who had a big day yesterday, and left many wondering if he could pull off a big comeback from Kentucky Lake’s southern waters.

Across both lakes, heavy boat congestion from weekend boaters and several other tournaments, along with the armada of spring crappie anglers, has made it a little tough on guys today. Floyd, in particular, has had to share water. He arrived at his best spot to find a competitor in another derby had already caught a couple keepers there. All’s fair on public water, but it still stings.

So, how will the final standings shake out? Hard to tell. If Morris can’t find anymore keepers, that could leave the door open for someone to come from behind and claim the top prize.

Could Jones, whose 21 pounds topped all day-two bags, overcome a dismal day one (3-3) with a monster final-round bag and rise from sixth place to win? Or could the cagey veteran Morehead leverage his four decades of local knowledge to pull a rabbit out of the hat?