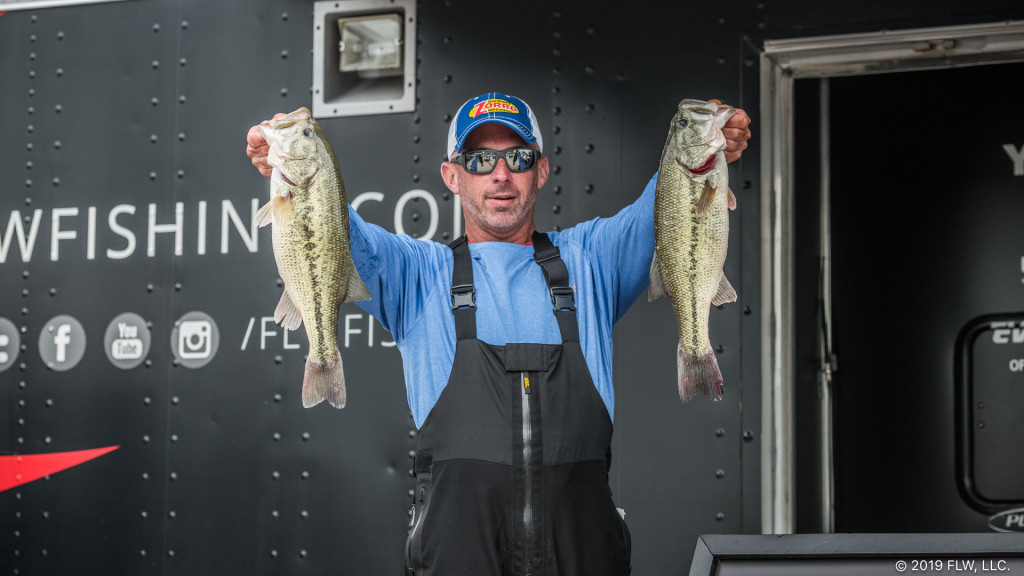 There have now been four days of tournament fishing in the Costa FLW Series Central Division this season. Jake Morris has led them all.

Coming off a wire-to-wire victory at the first event on Kentucky Lake, the McKee, Ky., pro sacked up 17-4 to lead stop No. 2 on Table Rock, which is presented by Power-Pole and hosted by Explore Branson.

“I’m having a barrel of fun,” Morris says.

Contrary to the Kentucky Lake event where the fishing was brutally tough, day one saw almost everybody catching fish. The problem has been quality. It seems like 3-pounders and above are at a premium, which has bunched up the majority of the leaderboard. A total of 55 anglers weighed in bags between 11 and 13 pounds, and less than 3 pounds separates 16th from 88th.

Yet, there is Morris way ahead of the log jam, and see if this sounds familiar: He did it making a long run to a tiny area he has all to himself (ie: the exact same story as Kentucky Lake).

“I don’t think there’s anyone within 10 miles of me,” Morris jokes about how far he’s running. “You couldn’t find me in a million years.”

That may be true, but what he found the final evening of practice is pretty special. Consider takeoff was at 6 a.m. and he’s running more than an hour, yet he says he had all his weight and left his area by 8 a.m.

“They’re just loaded in there, and they’re the right ones,” says Morris, who only caught 10 keepers today. All the fish he weighed in were largemouth.

The area is obviously key, but Morris also is doing something a little different than most pattern-wise that is also setting him apart. Of course, he’s keeping that under wraps for now.

Yet, what has him most excited is he doesn’t truly know what all he has in his area.

“I probably have only fished it for 2 hours total,” Morris says. “So I haven’t really been in there long enough to know what it’s capable of producing. I’m excited to find out.”