Topwater and flipping the dominant patterns at the top 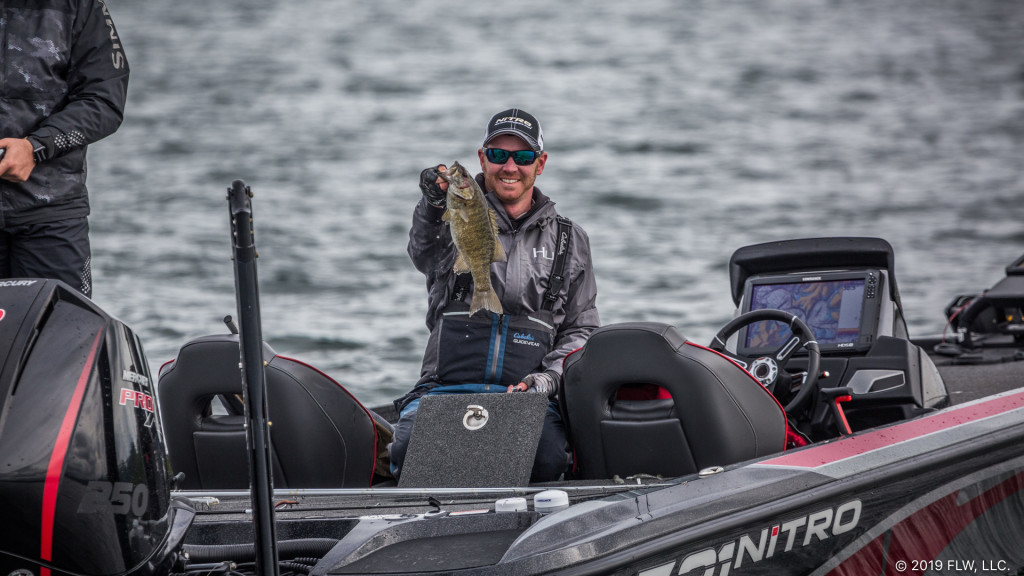 By catching 32-7 over the first two days of the Costa FLW Series Central Division event, which is presented by Power-Pole and hosted by Explore Branson, Morris has now led all five days of competition in the division this season.

That said, there’s a pair of FLW Tour pros and some local sticks in the top 10 all ready to do their part to knock Morris off the top of the mountain. 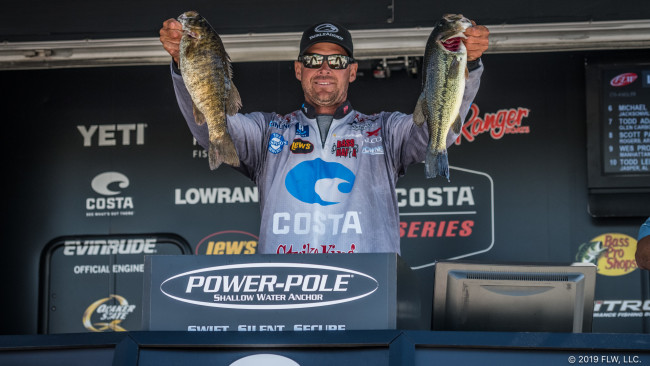 Nothing really went as Castledine planned today. So he was pleasantly surprised when he brought in 15-1.

“It was waaaay tougher for me today,” the FLW Tour pro says. “So I’ll definitely take what I had.”

Castledine has been trying to target smallmouths on shallow, offshore points with either aStrike King Rage Swimmer or a Strike King Sexy Dawg. He then supplements his brown fish with some green ones he catches off beds.

Things looked promising when he caught a smallie on his second cast of the morning, but he only got one more on his first spot. Then nothing on his second. On the third spot, Castledine says he had three “monsters” blow up on his topwater but never hook up. Finally, he caught three more on his next spot to fill his limit, but his bag didn’t weigh much.

That’s when he decided to go try for a bedding largemouth he lost yesterday. She was still there today, and she was still willing to bite, which was good, because Castledine lost her three more times today before finally boating her.

“That has to be the dumbest fish in the lake,” Castledine jokes, “but I’ll take her.”

He capped off his limit with another bedding fish he thought was tiny because she was in 8 inches of water, but she ended up being his biggest fish of the day.

Of course, if tomorrow’s forecast of clouds and rain holds true, sight-fishing will probably not be much of an option. 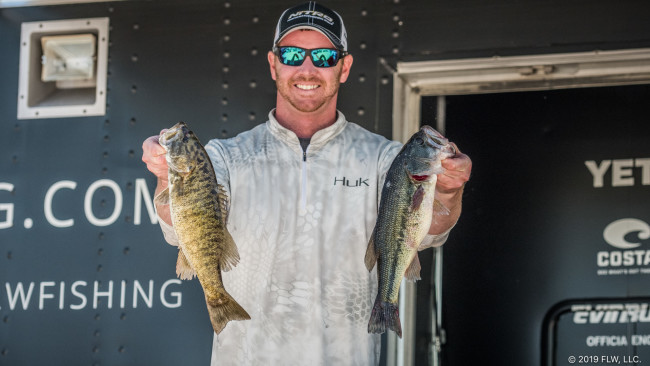 Matt Wood has quite the luxury right now.

Fishing the lower end, he has three points all within a couple hundred yards of one another (two are right next two each other, actually) that are loaded with big fish. It’s just a matter of if they want to bite based on the weather and bait.

“It just wasn’t happening today,” Wood says of his tougher bite. “The cold wind really pushed the baitfish and balled them up close to the bottom instead of higher in the water column like yesterday.”

Yesterday, his shallower sister points are where Wood caught the majority of his weight, including a giant kicker, targeting bass that he would watch bust shad, and he said it was something he watched hundreds of times. Today, he only saw it a handful of times, and instead had the joyful frustration of watching bass follow his Keitech Swing Impact FAT 3.3 swimbait but not eat it.

That prompted a move to his third point; a place where he honestly admits he’s not sure why the fish are there.

“They’re just sitting there,” Wood says. “There’s no bait or anything.”

Regardless, they’re there, and he caught three in three casts to fill out his limit. Now it’s just a matter of seeing which points produce tomorrow. 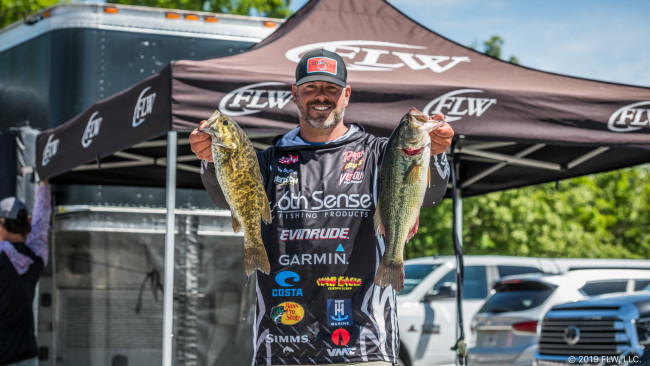 Eric Olliverson is pretty dialed in right now, and if not for a lost 5-pounder yesterday he very well could be leading. The program he’s dialed in on is a two-pronged approach.

“I’m targeting smallmouth in the mornings and then flipping for largemouth in the afternoon,” Olliverson says.

The smallmouth bite hasn’t exactly been banner, as he hasn’t gotten a keeper before 8 a.m. either day throwing a 6th Sense Crush Dogma topwater walker. But he’s gotten just enough both days to make it worth it until his flipping bite turns on in the afternoon.

That said, Olliverson thinks he’s really figured something out flipping that has him considering forgoing the brown fish altogether tomorrow.

“I have a special deal going I don’t even want to talk about,” Olliverson says. “It’s totally different; totally off the wall. I’m thinking I’m going to go all out with it tomorrow for largemouths.” 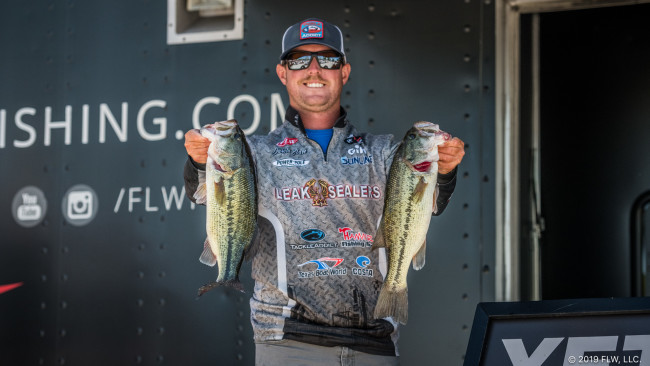 “I’m dying to get back out there,” the Louisiana pro says. “Look at my hands. They’re raw from catching so many fish.”

Ebare has been doing one thing and one thing only for two days – flipping. It took him a little bit the first morning to get dialed in, but ever since, he’s been getting 25 bites a day. In fact, he was saddened when he finally broke off a tungest sinker he’d been using since practice that had been chewed so bad it had no paint left on it.

Still, with the water in his area getting dirtier, Ebare thinks his bite up the James River will only get better and won’t be affected by the weather tomorrow.

“Everything I’m catching is males,” Ebare says. “They’re fry guarders. So it doesn’t matter what the weather is like tomorrow. They’re not going anywhere.”