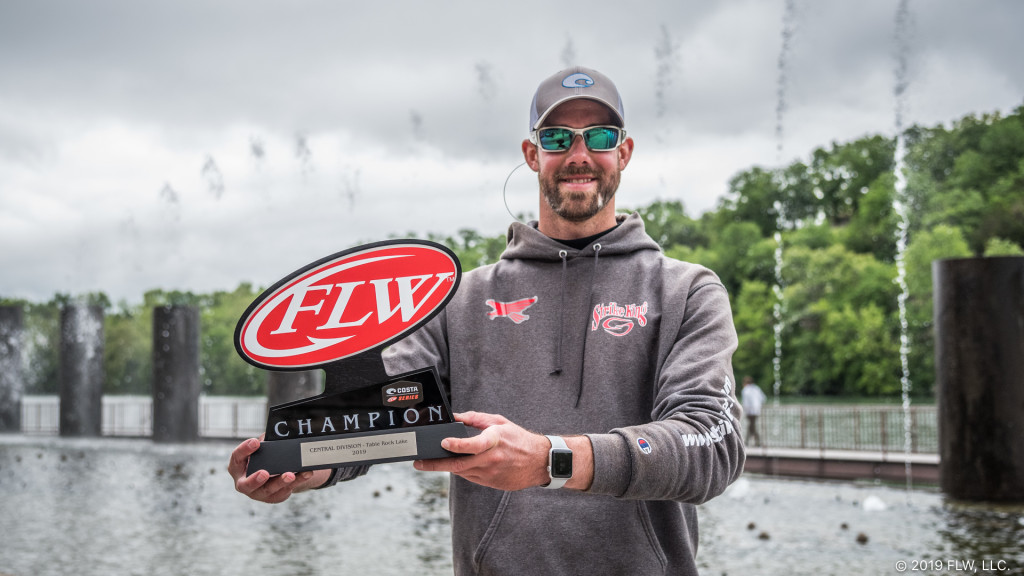 Back in 2016, Scott Parsons finished tied for first in a Costa FLW Series event on Lake of the Ozarks, unfortunately losing on the tiebreaker.

He dedicated that tournament to his brother, Dustin, who was battling kidney cancer; a battle he would lose the Monday after the event.

“He was my encouragement to fish,” Parsons says. “So this tournament brings back a lot of memories.”

This time, at the Costa FLW Series Central Division event presented by Power-Pole and hosted by Explore Branson at Table Rock, the memories are a little sweeter, though, because Parsons took home the first-place trophy. Today, the Rogers, Ark., co-angler brought in his biggest bag of the event, 13 pounds, 6 ounces, to get to 36-9 overall. He’d need every bit, as he held on to beat out Robbie Bartoszek by a mere 4 ounces.

This week showcased a knack for adapting on Parsons’ part.

On day one, he fished with Joe Gerard, fishing the same stretch of bank all day, which actually worked out perfect for him.

“I love dragging a shaky head,” says the champ, who was using a green pumpkin Zoom Trick Worm on a 1/4-ounce Buckeye Lures Spot Remover shaky head. “The way we were going, I was able to toss it out the back of the boat and drag it in 8 to 12 feet of water where the smallmouths were spawning.”

Yet, after a day of smallmouth fishing, Parsons drew Duke Jenkel, who was running up the White River to flip for largemouths. Thus, Parsons adapted, catching all his weight on a green pumpkin Big Bite Baits Fighting Frog with the tips of the pincers dyed chartreuse.

Today, it was back to the brown fish while fishing with Wesley Rogers. The two hit main-lake points in 20 to 22 feet of water, where Parsons did all his damage swimming a Yamamoto Single Tail Grub in smoke with black flake.

“I threw back so many smallmouth today my thumbs are raw,” Parsons says. “It was just an awesome week; one I want to dedicate to Dustin.”