Montgomery, Texas, pro does it in wire-to-wire fashion 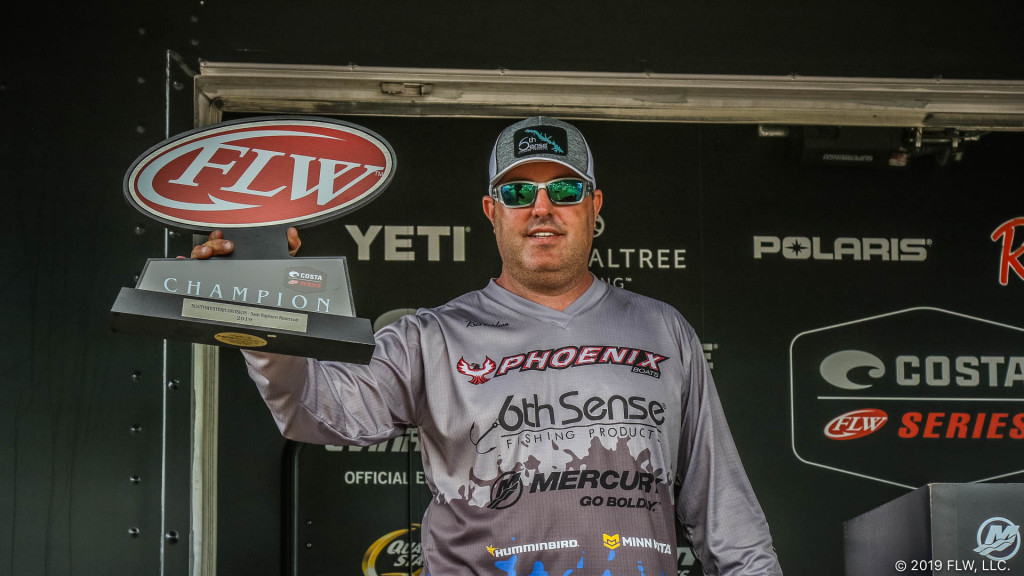 Yesterday afternoon, Kris Wilson was starting to show a tad bit of doubt in the pattern that had landed him in the lead for two days at the Costa FLW Series Southwestern Division event presented by Mercury on Sam Rayburn Reservoir. He was worried that his fish were leaving, or that they might not set up on his offshore spots in a way that he’d be able to continue his streak of 20-plus-pound bags.

All uncertainty left him today when Wilson pulled into his starting spot, saw that the waters were calm and the bass were there, and he quickly put a couple of 5-pounders in the boat. As the day went on, Wilson pounded out another big limit – 24 pounds, 1 ounce – to replace his doubt with a no-doubter of a win by a margin of 13 pounds, 15 ounces. His three-day total was 72-8.

Wilson, who works as a pipeline controller, is a regular contender here on Sam Rayburn. He says this year the fishing in early summer has been totally different than normal. By now, the bass are usually already set up on the main lake in 20 to 25 feet. However, due to high water this spring and summer, there’s a ton of brush, cypress trees and other shallow cover still in the water, and all that cover has delayed the transition from shallow to deep.

Wilson actually started out his practice looking for a bite in the brush.

“I came over here kind of expecting all the fish to be in the bushes with the water high,” he says. “I started out doing some flipping. I was catching some pretty good fish.”

As practice went on and Wilson expanded his search, he eventually realized the shallow bite might actually be petering out.

“I ended up kind of driving across a couple schools of fish I saw on my graph, so I started catching some 2- and 3-pounders. A lot of the fish I was catching in the bushes were small. I could get an occasional 4-pounder. I just kind of kept working more and more out. It evolved as the week went on. I think more fish were moving out. I think that was the whole key is I had fish coming to me all week.”

Though the water is still high at Rayburn, it’s been on a steady fall since practice started. A lot of the fish that were up in the far reaches of the floodwater have been moving out to brush on the edges. Others are trickling onto deep main-lake structure already.

But Wilson figured out that many of the bigger bass are still in between both extremes. He caught his fish on a series of hard-bottom spots near the mouths of large creeks where bass were stopping off on their way from the brush and wood to the main lake.

The primary spot where he started each morning produced 10 of the 15 keepers that Wilson brought to weigh-in this week.

“I think it was definitely replenishing is one big deal,” says Wilson of the productiveness of that spot. “Fish were coming out, and it had a couple bream beds around and some stumps – a tree line with an isolated patch of stumps right next to the bream beds. It was probably 12 to 15 feet deep, and that’s where most of the bigger ones were. It seemed like they were hanging around the stumps on that hard-bottom drop.” 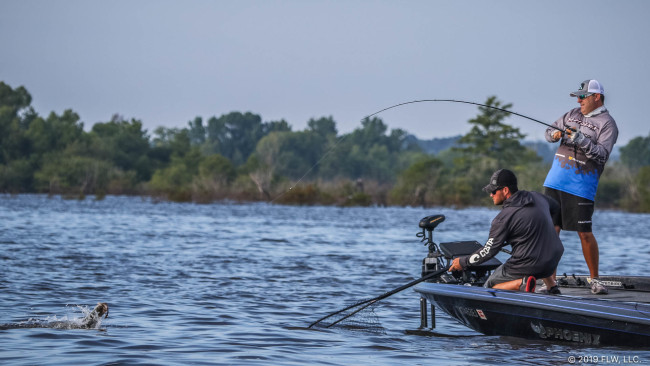 To catch his fish on that spot as well as a few other hard-bottom points – places where he caught key afternoon kickers each day – Wilson dragged a Carolina-rigged red bug creature bait that resembles a Zoom Brush Hog. It’s a bait poured by his tournament partner, Harold Moore.

Wilson kept his eyes on his forward-looking sonar and cast to wherever he saw the fish set up in front of him.

“I could see the fish moving around,” he says. “There’d be little groups of them.”

In addition to the Carolina-rig pattern, Wilson also used a homemade red bug ribbontail worm on a Texas rig. He fished it on a couple of different spots, but they also had the necessary hard bottom substrate.

“I had a couple stretches of hay grass that had some underwater bushes in front of the hay that I caught some pretty good fish off of,” he says. “I was Just throwing a Texas rig on those. The bushes were in 5 feet or so.”

Wilson’s doubt coming into today stemmed from the way the bass were set up on his starting spot yesterday. They weren’t grouped together as much but were roaming due to the heavy winds pushing waves across the surface.

“I think yesterday those rollers coming in there is what messed it up,” he says. “Today, when I got in there and it was calm, I knew I was going to catch them. I told him [co-angler Zack Freeman], it was going to be on when we pulled up.”

He was right. More than anyone else, Wilson did the best job of dialing in on the fish in their transition during what has been a very unusual month of June on Rayburn. While other pros gave it a shot in the bushes or by fishing out in typical summertime zones, Wilson worked the in between for one of the more impressive wins of the season. 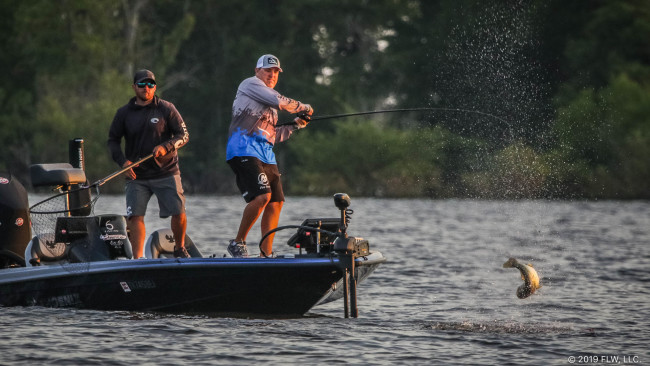