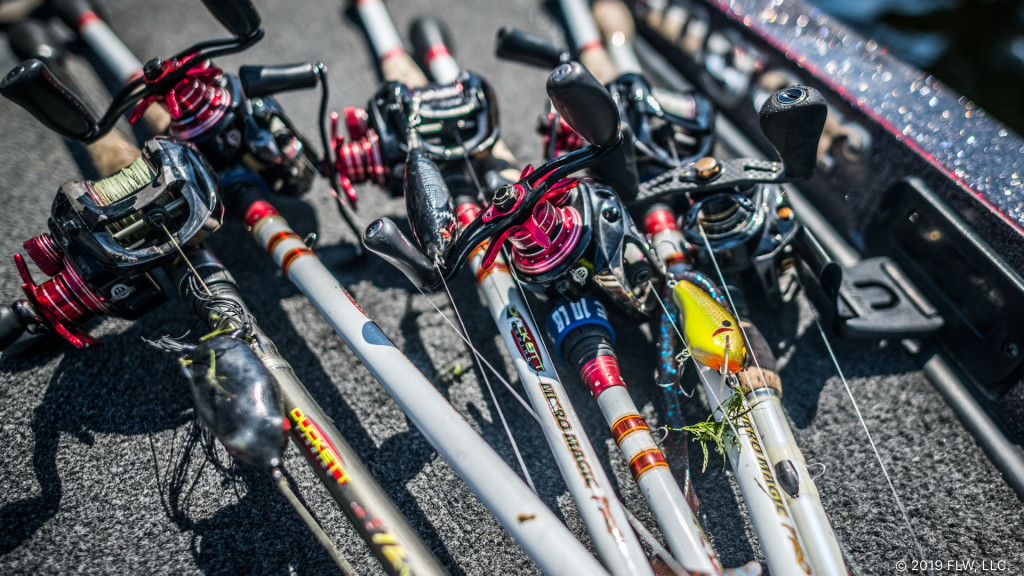 A mix of finesse and power got the job done
August 25, 2019 • Jody White and Charles Waldorf • Toyota Series

Late summer on the Potomac is often tough fishing, so the contenders in the Costa FLW Series Northern Division presented by Gajo Baits event had to pull out all the stops. Fishing everything from grass to docks and rocks, the anglers mixed up all sorts of power and finesse presentations to get the job done in the second stop of the season presented by Lowrance.

2. Finishing second and taking a varied approach, Troy Morrow employed a variety of plastics. For grass, he plied a Zoom Speed Worm with a cut tail in moccasin blue as well as a Zoom UltraVibe Speed Worm in watermelon moondust. Around hard cover, he did a lot of his damage with a drop-shot rigged with a moccasin blue Zoom U Tail Worm. 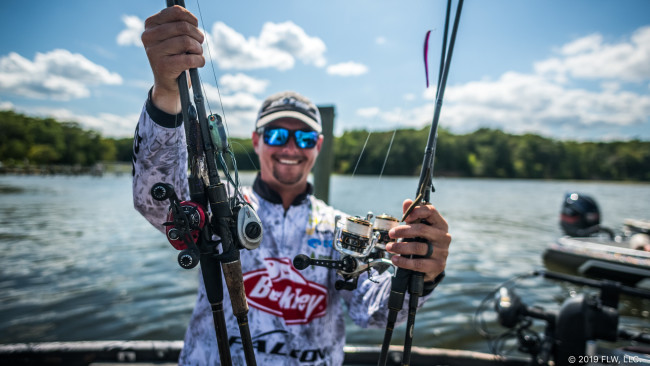 3. Justin Atkins caught the majority of his numbers on a drop-shot with a fat 4 1/2-inch hand-poured worm, but he also employed a popping frog, a Berkley PowerBait Bunker Hawg on a big weight and a weightless Texas-rigged Berkley MaxScent The General. 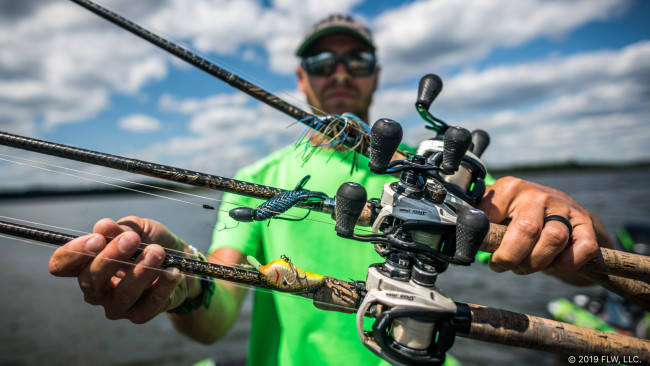 4. Working hard cover and pads back in a creek and mats closer to the river, Ryan Davidson relied on a bevy of baits. In the creek, Davidson wound a homemade balsa crankbait and flipped a Missile Jigs Mini Flip until he ran out and transitioned to a Strike King Fluorocarbon Flipping Jig. With both jigs, he used a 3/8-ounce model with a green pumpkin skirt and a Zoom Z Craw Jr. in Cajun craw for a trailer. For his punching, Davidson used a YUM Bad Mamma in black blue shadow. 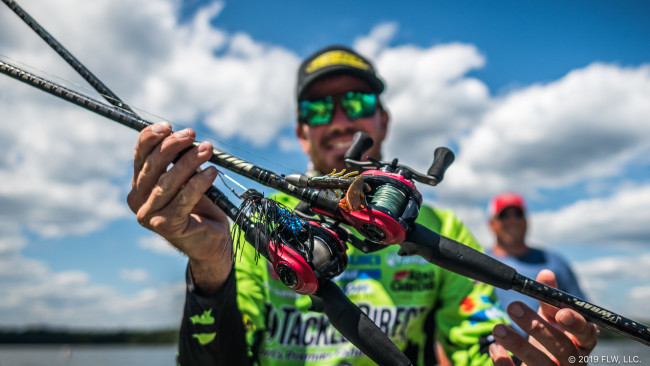 5. Adrian Avena’s deck looked like a warzone at the end of the tournament, but he ended up doing most of his damage with a ¼-ounce black buzzbait with a 3-inch Berkley PowerBait Pit Boss for a trailer and a Berkley PowerBait Chigger Craw with a 1 1/4 -ounce weight. 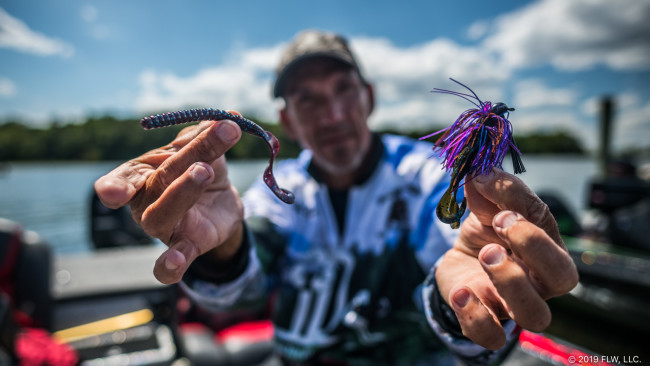 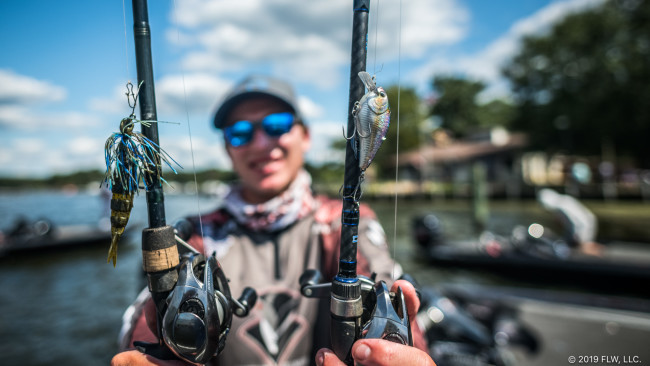 7. Fishing hard cover the whole time, Jordan Thompkins used either a Lucky Craft LC 1.5 with a clacker or a 3/8-ounce vibrating jig and a Lake Fork Live Magic Shad trailer. 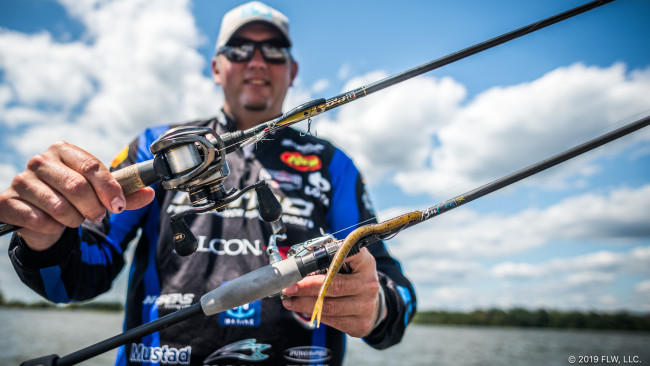 8. Dylan Hays kept it simple working around grass most of the time with either an XCalibur Zell Pop or a Zoom Fluke Stick. 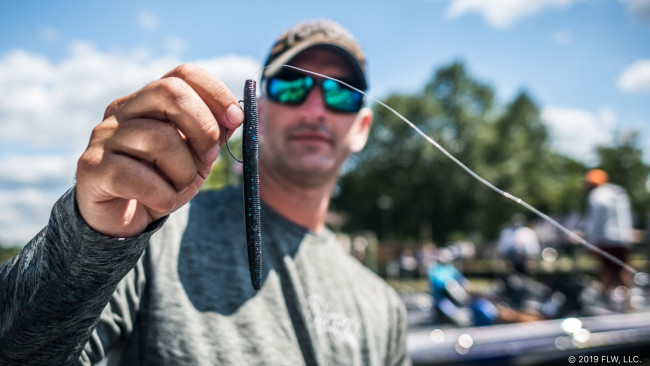 9. According to him, it was about the most boring way to make a top 10 that was possible, but a weightless Yamamoto Senko was still the ticket for Casey Smith.

10. Getting just a handful of bites each day, Wil Dieffenbauch used a homemade 3/8-ounce vibrating jig trailered with a Zoom Salty Super Fluke.