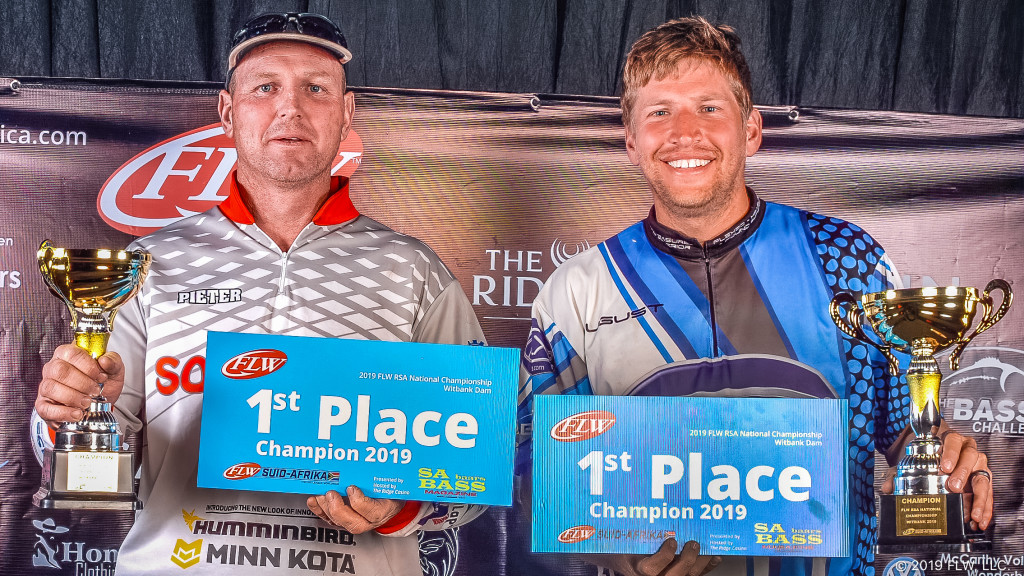 Team Khourie/Lignau, consisting of Pieter Khourie and August Lingnau of the North West region, came roaring back on day three of the 2019 FLW South Africa Championship with a five-bass limit of 10.55 kg (23.25 pounds) to take the top spot and beat out Greg Schluep and Giulio Nolli of Team Secret VC for the title.

Khourie and Lingnau found themselves in 21st place after day one, but they weighed in the 10th-largest limit on day two to put themselves in position to make a push on the final day.

Schluep and Nolli put together a solid limit of 6.17 kg (13.6 pounds) on day one and 5.54 kg (12.21 pounds) on day two, but Khourie and Lingnau boated the biggest bag of the tournament – by far – on the final day to ultimately overtake their opponents.

Both teams earned a berth in the 2019 Costa FLW Series Championship on Lake Cumberland with their top finishes. One angler from each team will fish as a boater and the other as a co-angler. 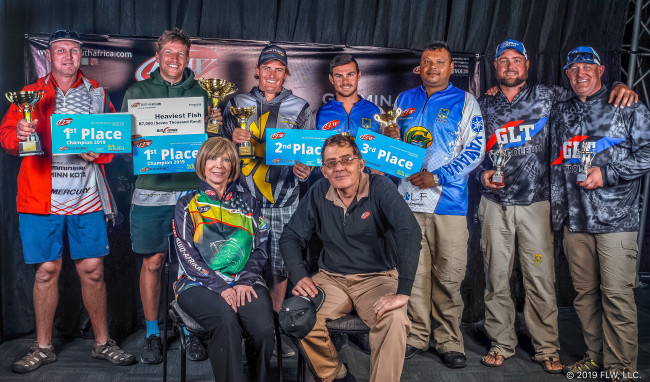 Khourie and Lignau pulled some key fish from the river section of Witbank Dam each day of the tournament, but their strategy of fishing grass lines with weightless Yamamoto Senkos early in the morning yielded the momentum they needed each day. They managed to box a limit within a half-hour each morning targeting those fish. When the wind picked up in the afternoons, the duo pivoted to fishing grass and rocky banks with Texas-rigged Zoom Flukes and Yamamoto Stretch 40 soft plastics.

On day three, Khourie and Lignau retreated to a wind-protected bay because of an incoming cold front and managed to sack up about 7 kg before returning to the river to upgrade their eventual tournament-winning bag.

A total of 65 teams and 128 anglers (two teams consisted of only one angler) participated in the championship event, held on Witbank Dam in Mpumalanga. While conditions proved to be somewhat difficult and finding big female bass was especially challenging – even during the prespawn period – the field averaged about 13 fish per team for the event for a tournament average weight of 10.412 kg (22.95 pounds) per team across three days of competition. Every team in the top 20 weighed in full five-fish limits all three days.

The North West region, headlined by Khourie and Lignau, won the inter-regional contest, determined by average bag weight for all anglers in each region. KwaZulu Natal and Gauteng finished second and third, respectively.

The four FLW South Africa qualifiers will compete against upward of 200 anglers in the FLW Series Championship, beginning on Oct. 31. They’ll not only be matched up against some of the best American anglers, but also International Division qualifiers from Canada, China, Italy, South Korea, Spain, Portugal, Mexico, Namibia and Zimbabwe.

The top finisher on the pro side among International Division qualifiers at the FLW Series Championship will earn a spot at the 2020 FLW Cup.

All photos by Darren Brooks. 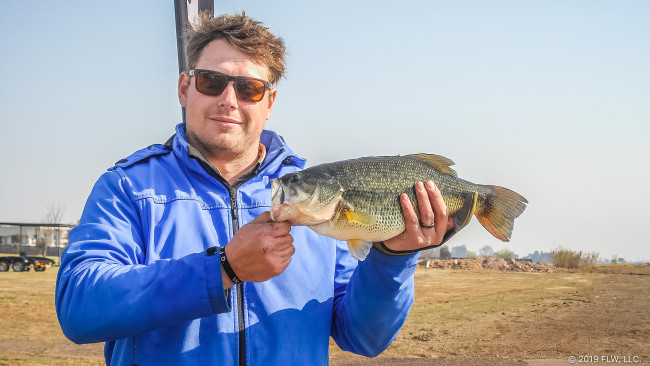 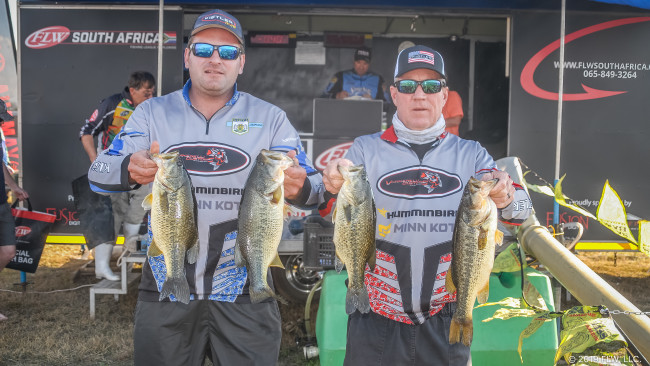 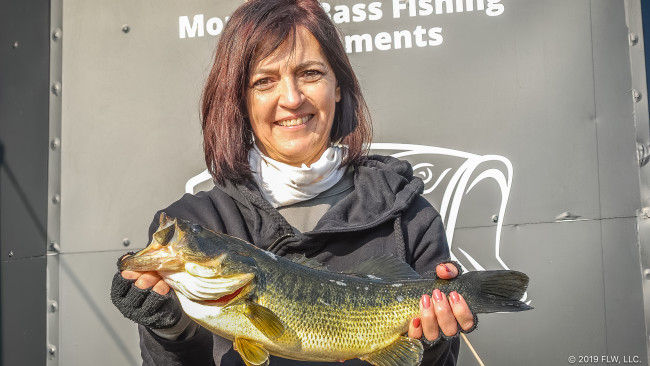 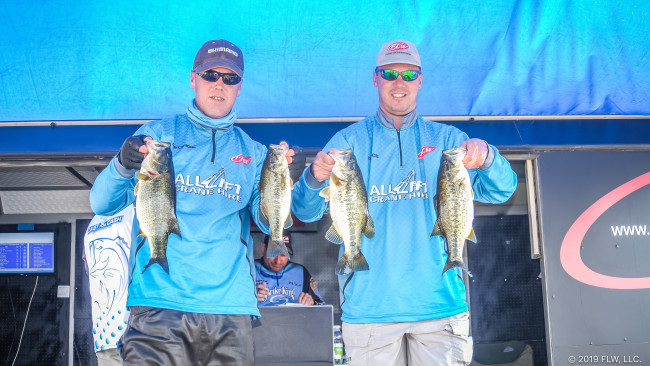 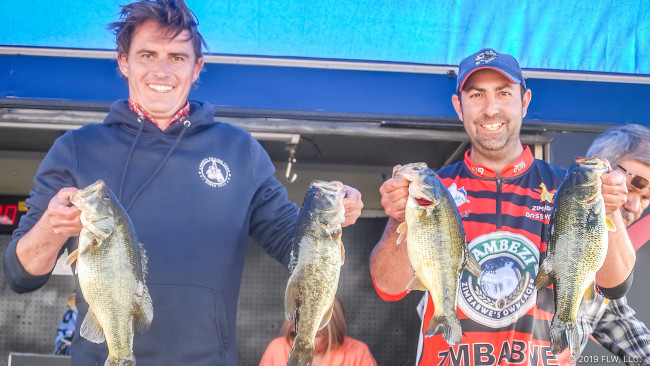 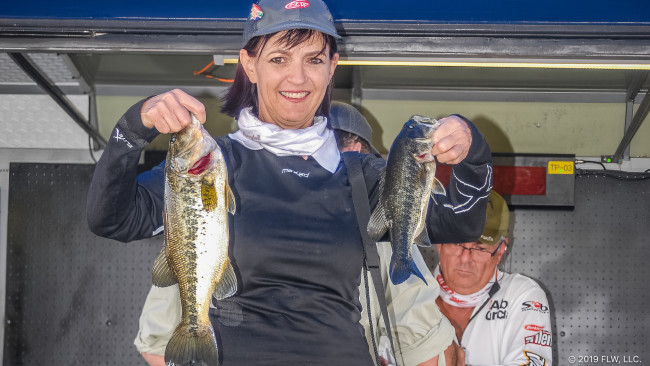