Changing conditions may rustle the leaderboard 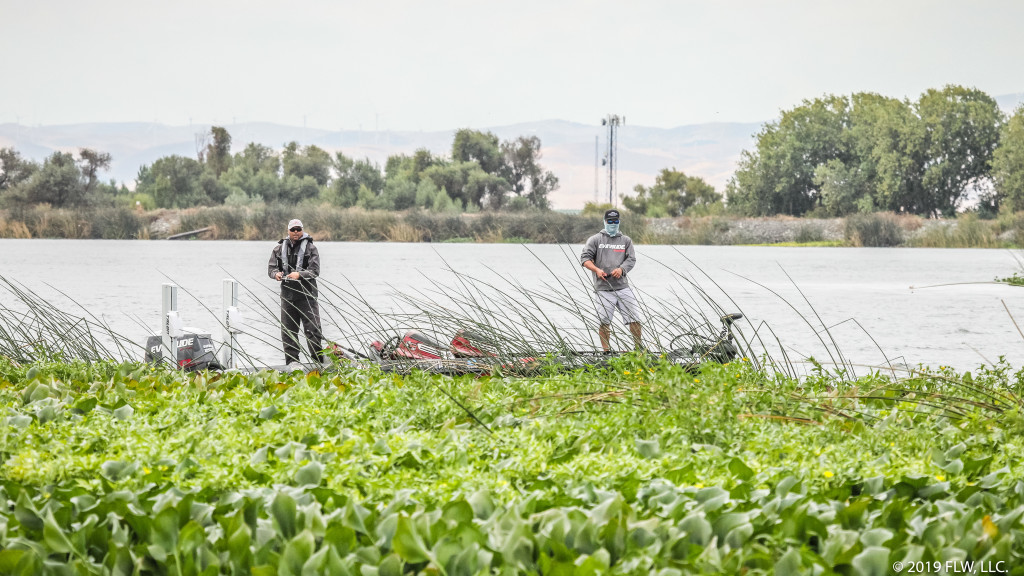 A cold front moving through the area greeted anglers with cloudy, windy conditions for the day two takeoff at the Costa FLW Series Western Division event presented by Power-Pole on the California Delta. Daybreak temperatures in the low 60s rose to the mid-70s by noon — about 20 degrees cooler than day one. By midday, the classic post-frontal “bluebird” conditions had set into the area.

Most of the anglers we visited struggled to find consistency, as fish adjusted to the weather changes. The common two-pronged attack was a bladed jig and a punch rig, but topwater walkers, drop-shots and soft plastic baits also entered the mix.

Day one leader Blake Dyer caught 27 pounds, 3 ounces yesterday and carried a lead of 1-11 over second-place Jason Borofka (25-8) into today’s competition. At noon, Dyer had a limit that he estimated at 15 pounds.

While the day two winds have been a little lighter than yesterday, they still pack a punch. Dyer ran to one of his early spots, slowed down to look and then kept going. Later, he explained that the hyacinth mat he had planned to fish was completely gone — blown out by the wind.

Days like today can be particularly tough for co-anglers, but Joey Yang was having a strong morning on the back of Dyer’s boat. Mixing it up with a vibrating jig and finesse rigs, Yang was working on a solid limit.

Mike Birch — third yesterday with 21-9 — had four keepers for about 10 pounds, including a 3-pounder by mid-morning. Like some others, he's alternating between a vibrating jig and a punch rig.

Birch says the morning’s cloudier conditions made it harder for him to spot the isolated shallow grass clumps he needed to target. A sunny afternoon should help him and others following similar game plans.

It’s likely that today’s weather will result in a leaderboard shake-up. The key component will be consistency, so it will be interesting to see how many of yesterday’s top performers can back it up with solid day two bags. To see what happens, come on down to Russo's Marina or tune in online at 3 p.m. PT.