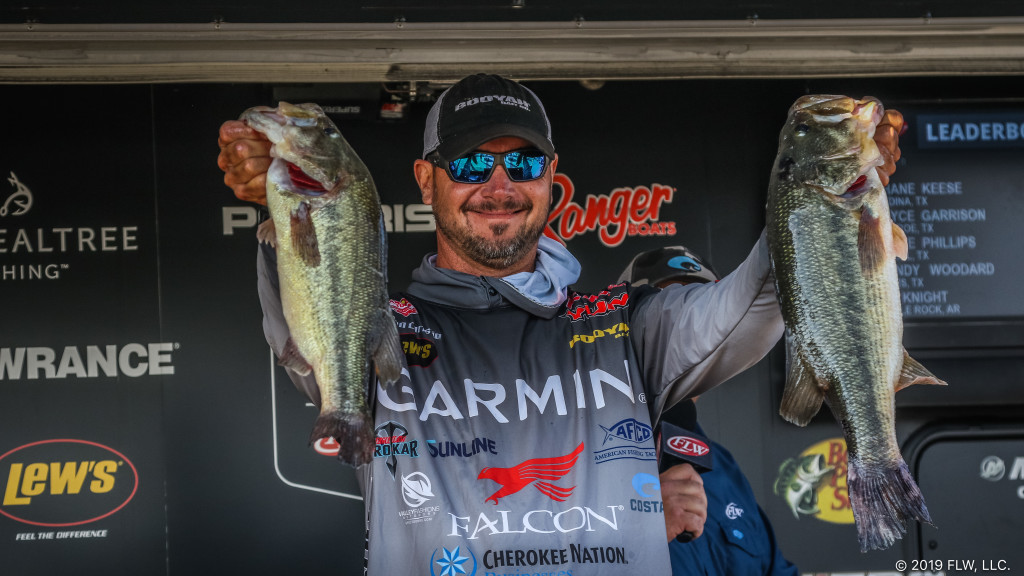 Jason Christie Photo by Justin Onslow.
Only two other pros break the 18-pound barrier on day one
October 3, 2019 • David A. Brown • Toyota Series

Oklahoma stick Jason Christie overcame the unsettling effects of a passing cold front to sack up a five-bass limit that weighed 22 pounds, 10 ounces for the day one lead in the Costa FLW Series Southwestern Division finale, presented by T-H Marine on Oklahoma’s Grand Lake.

With a lifetime of experience on Grand, Christie said his local knowledge definitely helped him, but not necessarily in relation to particular spots. Today, it was more about understanding what triggers fall fish.

“I actually made a change late in the day and caught the bulk of my weight. Even though they were biting in the morning, they weren’t all quality fish.”

The difference-maker, Christie says, was the day’s front-related conditions. The morning began with 15-20 mph winds and, despite a slight drop in midday velocity, the blow continued most of the afternoon.

“Those fish just moved up and bit,” Christie adds.

Understandably thin on details given that he has potentially two more days to fish, Christie notes that the areas he fished was particularly important because of water color.

“I started fishing areas that have a little different color water, and I just started getting bit – and they were the right size,” he explains. “There’s a color of water here that the fish just bite in. Sometimes I was in too dirty of water and there were times I was in too clear of water. I don’t know how to explain it, but there’s a color of water here that, whenever it’s cloudy, they bite.”

Christie says he mixed it up on the bait selection. Reaction baits played a role in his day, but he also turned to his signature flipping technique. Covering water and hitting what he called high-percentage areas was the key.

“I had six rods on my deck and I think I caught fish on five of them, and I caught big ones on different ones,” Christie says. “It’s just fishing the conditions. If a bait felt right, I’d throw it; if it didn’t, I’d throw something else. There’s not a single rod that I could leave at home tomorrow and feel like I’m out of it.”

Christie says he’ll try to replicate the things that served him well today during his day two effort, but he’s making no assumptions – especially on this lake he knows so well.

“Hopefully, things can roll tomorrow, but that’s the thing about this lake in the fall – it’s really hard to stay consistent,” he admits. “Right now, I would take the five I culled for tomorrow. It’s hard to catch them two days in a row.” 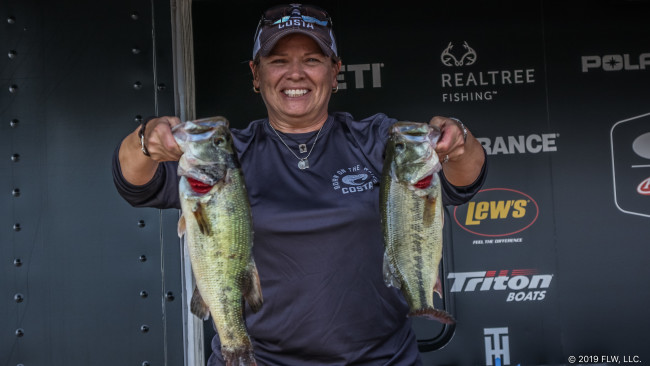 Robin Babb of Tulsa, Okla., made the most of a target-rich scenario and caught a limit that went 16-8. Notably, her bag was bigger than all but the top four pro sacks.

Paired with second-place pro Cody Bird, Babb was respectfully guarded with details on what her partner will surely fish on day two; however, she did say that responding to the day’s dynamics proved essential to her success.

“We scooted out a little and we had some current running so the fish activated, and we took advantage of it,” she says.

Using a mix of reaction baits and slower presentations, Babb credits Byrd with bringing her to the opportunity and making sure she could share in the bounty.

“He did his work and put us on some fish and was kind enough to let me catch some fish behind him,” Babb says. “We really worked well together and that was the key – working well together.”