Bird Moves Ahead on Grand 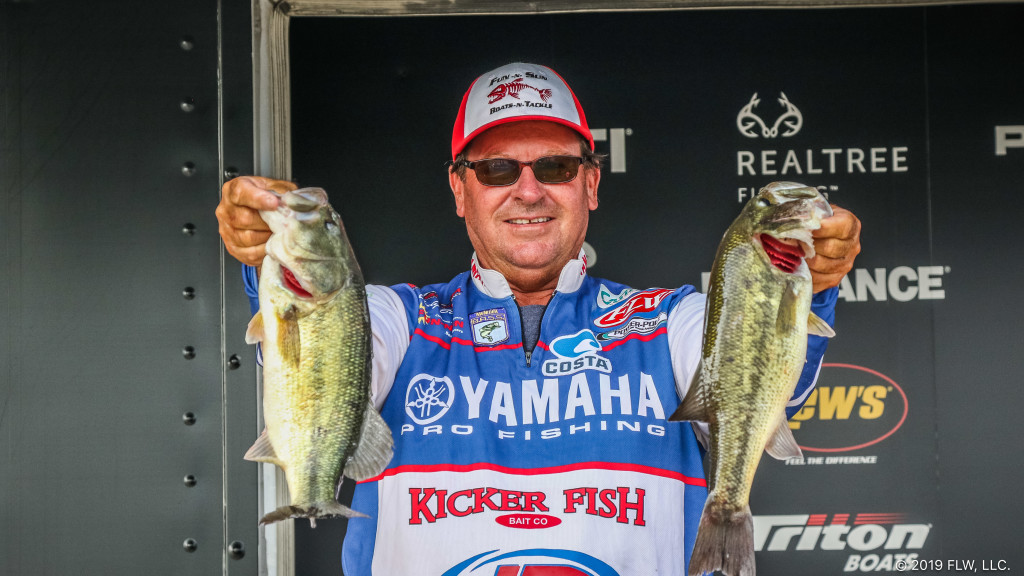 After his sizzling day-one pattern fizzled, Cody Bird adjusted his focus to a completely different scenario and sacked up a limit of 13-11 on day two to take over the lead in the Costa FLW Series Southwestern Division finale, presented by T-H Marine, with a two day total of 32-14. Going into Saturday’s final round, Bird holds a 7-ounce lead over day-one leader and Grand Lake stick Jason Christie.

Yesterday, Bird caught the second-place limit of 19-3 by targeting a particular scenario where fish were relating to the current caused by falling lake levels. Today, that pattern went away when the current slowed.

“I guess the water got too low for that deal,” Bird says. “I struggled all day; my partner had five fish four hours before I had five.”

Realizing he needed a new strategy, Bird moved to a shallow, wood-strewn flat and pulled out the serious offerings.

“I’m fishing big baits and trying to catch big fish, because I know what I’m dealing with with Christie,” Bird admits. “I knew I had to catch big ones if I was going to have any chance.”

After catching his first-round fish on a mix of moving baits and slower baits, Bird focused on the latter today. His success, he says, came through a combination of location, depth and patience.

“I’m pitching some and casting a little bit; I’m junk fishing pretty much,” he explains. “I kind of know where the bigger ones are setting up. If the water drops any more I’m probably done, but if it will stay halfway stable, I think I can catch another limit.

“I had a feeling it would be a later bite today and it was. It’s hard to get a limit right now. I just got one here and one there.”

Bird admits that the day’s slow pace may have lulled him into a lapse of attention that cost him a couple key opportunities.

“I think that’s why I missed one of those big ones,” he says. “When you pitch into 6 inches of water and your line keeps going, something’s happening. I should have been setting the hook before I did and he got around a tree and got off.”

Bird says he took a midday break to try cranking a rocky bank, but that plan proved fruitless, so he returned to the shallow flat that would end up producing all of his day’s weight. Despite his current lead, Bird says he had no easy route today.

“I’m telling you, it’s tough, tough,” he says. “For one minute I’m thinking what I’m going to say on stage for not having them, and the next minute, I’m thinking I might have a chance. I think you’re never out of it as long as you just stay with it and concentrate.” 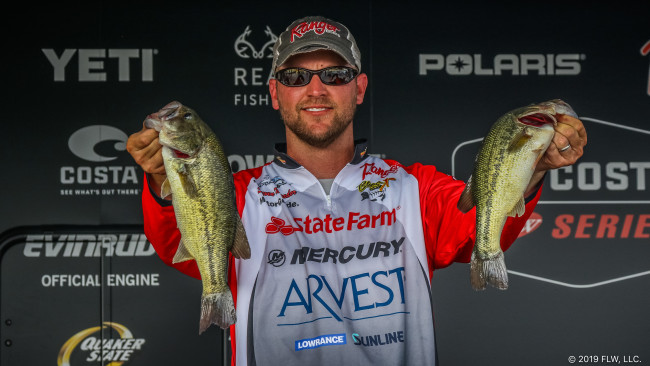 Steven Meador, who won last year’s co-angler title on Grand Lake, leads his division by a 3-pound, 4-ounce margin as he heads into the final round with a two-day total of 20-1. Adding 6 pounds to the 14-1 he weighed on day one, the Bentonville, Ark., co-angler describes a stingy second round that yielded only three keepers.

“Today, they dropped the lake a lot and that spun a lot of folks out,” Meador says. “I don’t know if the cold front did the bulk of the damage, but those fish did not want to bite today. I had a lot of shorts and only three keepers today.”

After fishing mostly reaction baits on day one, Meador says his program comprised a lot of slow dragging and hoping for bites.

“I caught fish on five different baits; it’s been just complete junk-fishing and fishing the moment, depending on where your boater takes you,” he says. “Then, it was about picking up the right rod and making those percentage casts.

“I know to be patient; you’re not going to get many premium casts. You have to make sure you’re picking up where your pro had missed and you try to catch a lot of fish just off the bank that are overlooked. It’s a lot of time out there in no-man’s land.”