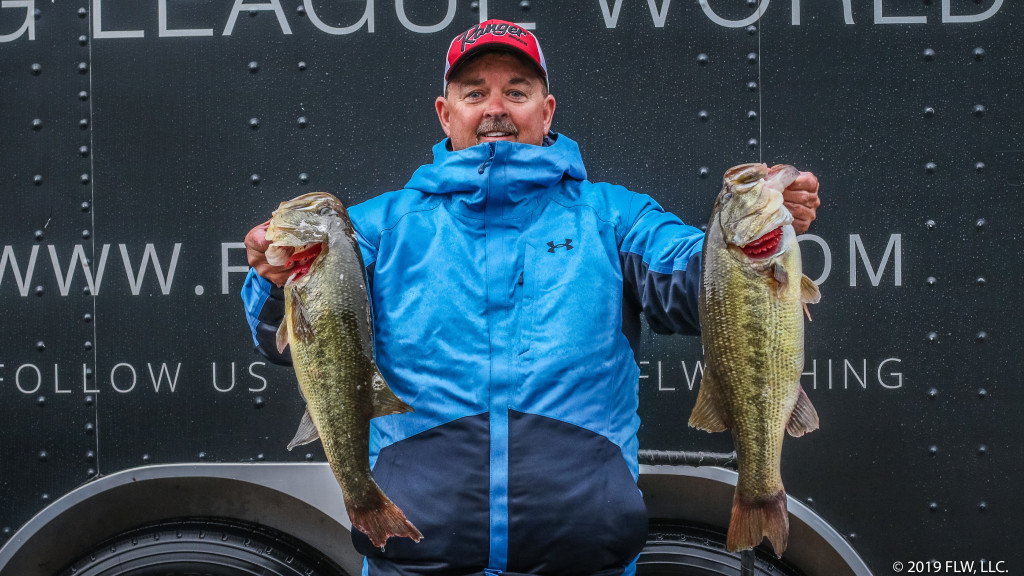 Mother Nature is absolutely throwing a fit right now over the Ozarks, but for Ladd Shannon, it may have actually helped him.

Torrential rains, wind and lightning made for a pretty soggy day one of the Costa FLW Series Central Division presented by Evinrude on Lake of the Ozarks. In fact, the weather was so bad this morning it delayed takeoff more than an hour to let the initial wave of what is a significant cold front blow through.

All that weather had many anglers scrambling, including Shannon, who says it decimated his initial pattern. Fortunately, it may have helped his backup pattern, which pumped out five fish to the tune of 19 pounds, 6 ounces to take the lead.

“It was actually a lot tougher today than I thought it would be,” says the Atkins, Ark., pro. “I thought there would be multiple 20-pounds sacks weighed in with a day like today. So, I’m happy to be leading.”

Shannon started out on a pattern that was easily producing 12-13 pounds every day of practice. Yet, like many pros, he says the weather system moved his fish, and at 11:30 a.m. he didn’t have anything in the livewell.

That’s when he decided to scrap his main pattern and go to the backup, with near immediate results.

“I caught a 4 and a 3 right away, and I knew then I was doing the right thing,” says Shannon.

Now, there were three key asterisks about this backup pattern.

First, he’s not catching many fish doing it, as he only caught five keepers all day, and one was a 12-inch spotted bass. Of course, that squeaker was offset by a pair of 5-pounders, including a 5-11 that took big bass for the pro side.

Two, no one else seems to be doing it.

“I had a friend of mine that fished with me this weekend, and he said ‘nobody is going to be doing this,’” says Shannon. “It’s a pattern, but it’s also some specific baits. One specific one is what both 5-pounders came on.”

And three, it may not go tomorrow as the cold front takes full effect. Of course, Shannon may be ok with that.

“I think the fishing is going to get really tough [Friday and Saturday],” says Shannon. “But I actually think my initial plan may end up coming back into play, but we’ll see how it turns out tomorrow.” 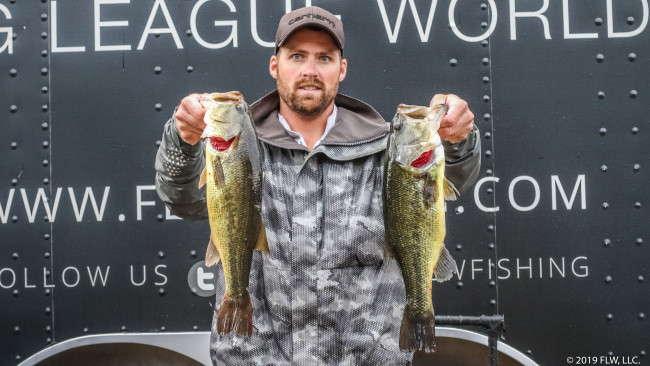 Depending on the pro’s pattern, there may not be much water for a co-angler to fish. Yet, that doesn’t mean you can’t be successful, as Ryan Jobe saw today on Lake of the Ozarks.

Fishing behind pro Kyle Welcher, Jobe managed to flip up five good bites to lead the co-angler side of the Costa FLW Series Central Division presented by Evinrude with 12-14.

“[Welcher] was fishing a lot of moving baits, and I knew, as tight as he was to the bank, there really was no way I could get a moving bait in there effectively,” says the De Soto, Kan., co-angler. “So, I just started flipping, and all the fish were right up against the bank.”

Now, Jobe only got five bites flipping, but fortunately he got two quick when he switched to the flipping bite around 10 a.m. After that, it was just a matter of grinding out the last three, with the final keeper coming within the last 30 minutes.

“As soon as I popped those first two right off the bat, I knew that’s what I was going to do the rest of the day, and I did,” says Jobe.