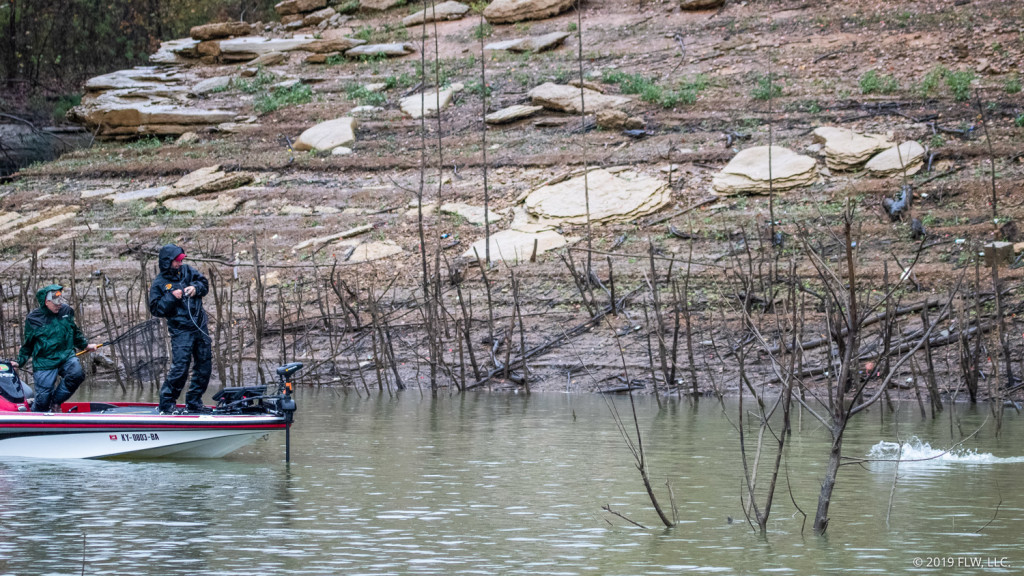 Bryan Thrift, who won the FLW Tour event at Cumberland last year, has four fish for what he says is about 6 pounds. There's a chance that bag weighs a little more than that, but either way, it's safe to assume the 2019 FLW Cup winner will come back to weigh-in with a good limit.

With just a couple hours until weigh-in, the live blog is shutting down for the day. We should have even more updates tomorrow with FLW Live running from 8 a.m. until 2 p.m. ET. In the meantime, you can catch weigh-in for day one at 4 p.m. ET on FLW Live at flwfishing.com.

While not a giant by any means, a 4-pounder goes a long way on Cumberland on a day like today. Brent Algeo ran into one and has three more fish in the box to go with it. If he can fill out his limit and cull once or twice, he'll be bringing a nice bag to the weigh-in stage.

While the rain has mostly subsided, the sun hasn't made much progress in escaping the cloud cover, and the wind has certainly picked up. On a long, narrow lake like Cumberland, it's all but a certainty wind is going to be a factor on days like this. 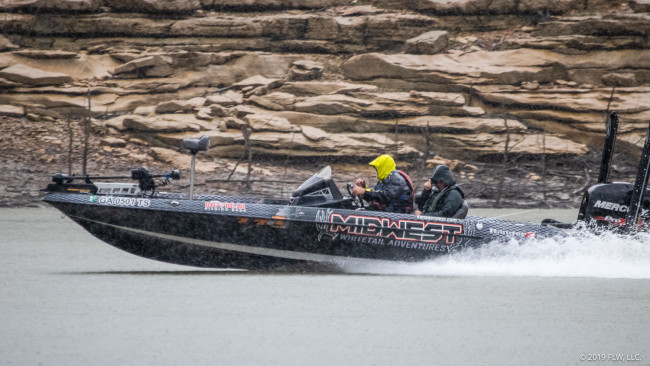 Shawn Kowal announced that he has a limit on the way past one of our on-the-water reporters. We aren't sure how big of a limit it is, but it's probably not as good as that of Timmy Thompkins. The FLW pro says he has five in the box with only a couple he really has to cull out. That should put him over the 10-pound mark for sure (likely well over that) assuming none of the other three are giants.

Kowal's co-angler, Austin Archer, has two fish and one is a pretty good one.

Meanwhile, Dicky Newberry has two fish in his livewell for about 3 1/2 pounds. Pat Fisher has added one more fish (a 3-pounder) since we last checked in with him. Unfortunately, he's also lost a couple keepers that surely would have helped.

Rob Burns has himself a limit, though we aren't sure how much weight he has. Brett Pruett has only one in the box, a 14-incher. Elsewhere, Cody Nichols has yet to hook into a keeper, despite catching a handful of short fish, and his co-angler, Jared Rudd, is having similar struggles landing a limit-starter.

The sun appears to be making every effort to poke through the clouds. The rain has definitely died down, and that'll probably be the end of the wet stuff for the tournament. Friday and Saturday call for dry conditions but a lot more of sub-50s temperatures.

Daniel Urbino has our second reported limit of the day that includes "a couple good ones." Even if the other three are squeakers, he's looking at a decent bag right now. He's been slinging around an umbrella rig. 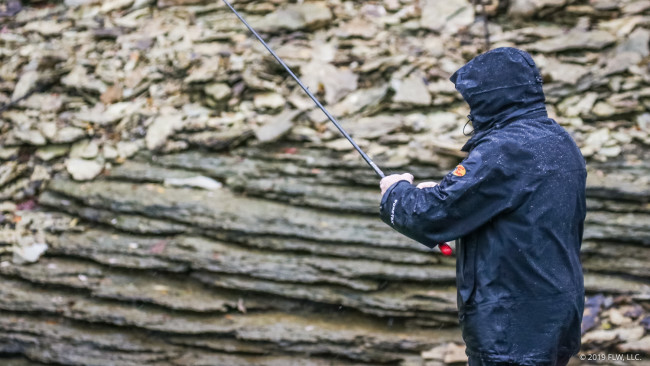 The first report of a limit just came in, and it's Mike Casada with a stringer of about 12 1/2 pounds. That's a quality bag, especially with several more hours to fish. If he can upgrade even a little bit, Casada is going to be in solid position heading into day two. Opinions vary, but many anglers estimated 14 pounds a day could win this thing. At the very least, back-to-back days of 14-plus pounds will have an angler fishing on Saturday. 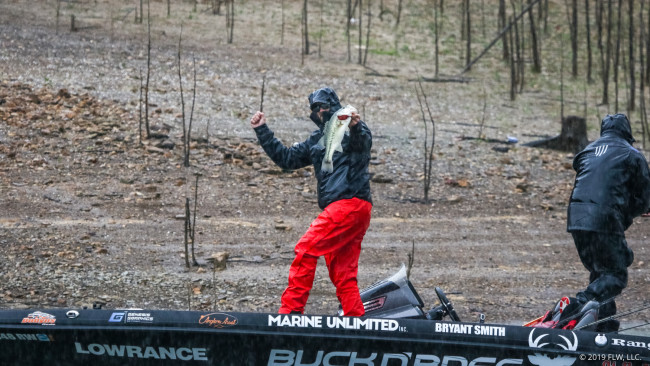 The rain has died down a bit, but it's still awfully wet on Cumberland, and the temperature continues to fall.

Lance Williams doesn't seem to be bothered by the weather, though. He has two fish in his livewell for about 4 pounds. Elsewhere, Jake Boomer has a 3-pound smallmouth and a spot in his box. He's been slinging around an umbrella rig. Bryant Smith has a green one that's over 4 pounds.

Buzzabits and other topwaters remain a prominent approach to Cumberland's bass in these conditions. It's hard to imagine the topwater bite not getting even better as it gets colder today and into Friday. 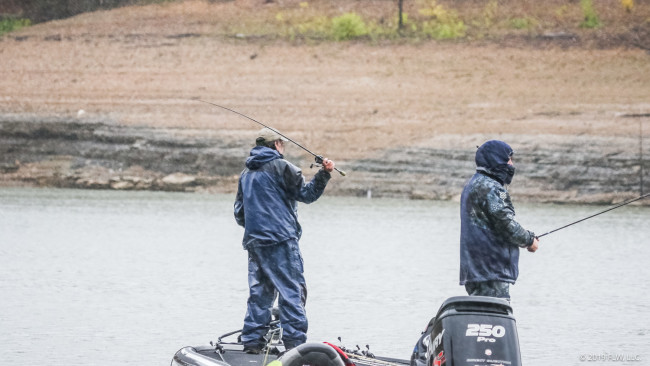 Ashton Laird hauled in a 2 1/2-pounder not long ago. That seems to be the most prominent size across the field so far. Cumberland is packed with fish in the 3-pound range, and filling out a limit with those kinds of fish is going to be key this week. Whoever wins is going to have to have a couple stringers full of 2- to 3-pounders with a couple kickers mixed in over three days.

Rick Chenoweth also says he has one in the box, though we aren't sure how big. Along with topwaters, a lot of pros are slinging crankbaits and spinnerbaits, as well as dragging jigs. There haven't been too many off-the-wall patterns we've seen so far. It's mostly been fall staples in fall spots. 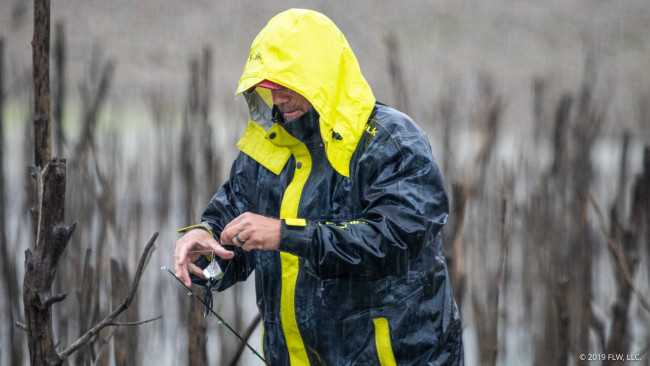 As expected, anglers are turning to topwaters early and often in the rainy, quickly cooling conditions. There's a good deal of wood for target-specific casts and over 1,200 miles of rocky shoreline to probe.

The rain doesn't seem to be letting up much, but the wind has died down significantly in some areas. If forecasts are to be believed, the wet stuff should be moving out in the next couple hours to be replaced by a winter-like chill on the other side of noon. 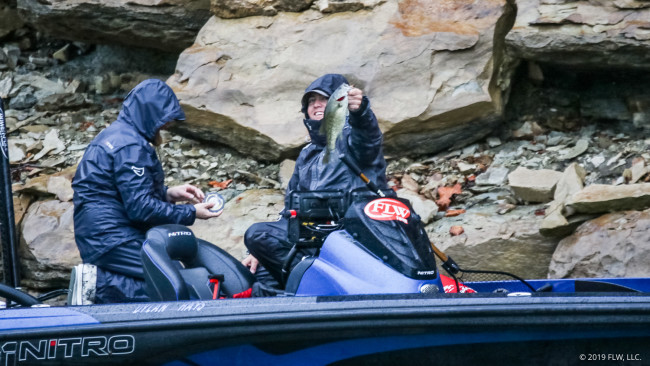 Jake Morris wasn’t joking when he said he was fixing to start filling out his limit. He just landed a solid 2-pounder to pick up some positive momentum.

Dylan Hays has a keeper smallmouth in the box, and Jon Canada has a 1 1/2-pound spot. It seems like a slow start on Cumberland, but it’s a big lake with 193 boats, and someone somewhere is surely catching them, despite the nasty weather conditions.

The wind is really starting to rip now and the temperature is quickly dropping. This morning is turning out to be even nastier than expected, as rain continues to fall across Lake Cumberland.

FLW pro Bob Berhle doesn’t have a fish yet, nor does Jake Morris, though the latter says he’s “fixing to.” Apparently, the Kentucky hammer knows something a lot of other pros don’t.

Fellow FLW pro Dylan Hays is having a rough morning. Like Berhle, he doesn’t have anything in the box, but he’s lost three fish already.

The rain is dumping in buckets now, but some fish catch reports are starting to come in. FLW pro Kyle Cortiana has one in the box – a 15-inch limit starter – fishing up in the river. It sounds like a lot of boats decided to start in Fishing Creek this morning. Central Division AOY and McKee, Ky., resident Jake Morris has about eight other boats around him. He’ll be someone to watch as today unfolds.

Tyson Patrick, also fishing the river, has nothing to report yet. He’s still fishless to this point. 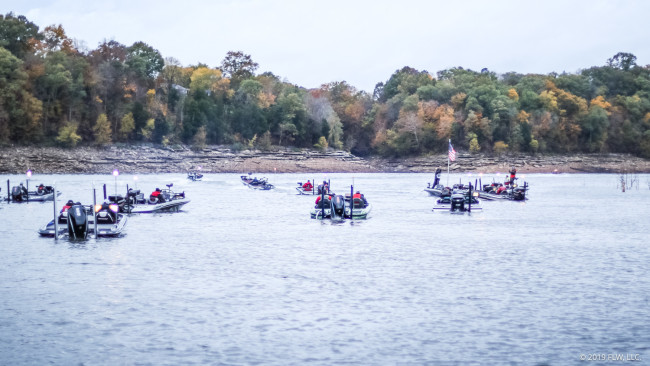 It’s not raining all that hard yet, and early indications suggest it might just be a steady, dreary rain throughout the morning. For pros chasing a topwater bite this week, the first few hours of the day might be the ticket.

The big question right now is how practice patterns are going to hold up today. It was mostly sunny and warm throughout practice, and changing conditions could end up negating much of what anglers found in the days leading up to the event.

On the other hand, several anglers we talked to this week weren’t all that happy with their practice time, so a change in conditions could just as easily open things up throughout the morning – at least until the temperature starts dropping. We’re looking at temperatures in the low 40s by weigh-in.

With rain early and a cold snap forecasted to move in this afternoon, the first day of the Costa FLW Series Championship on Lake Cumberland could present some unique challenges for the 193-boat field, especially after a fairly mild and pleasant practice period.

Falltime fishing can already be a bit of a wildcard in many parts of the country. On Cumberland, during quickly changing conditions, it’s anyone’s guess who and what produces the biggest bags on day one. Will it be mostly smallmouth or will largemouth anchor the top stringers? Will the topwater bite be on fire amid the nasty conditions or will fishing offshore get the job done?

With a field this big, there are sure to be some anglers who figure it out. Follow along as we provide updates on all the action.