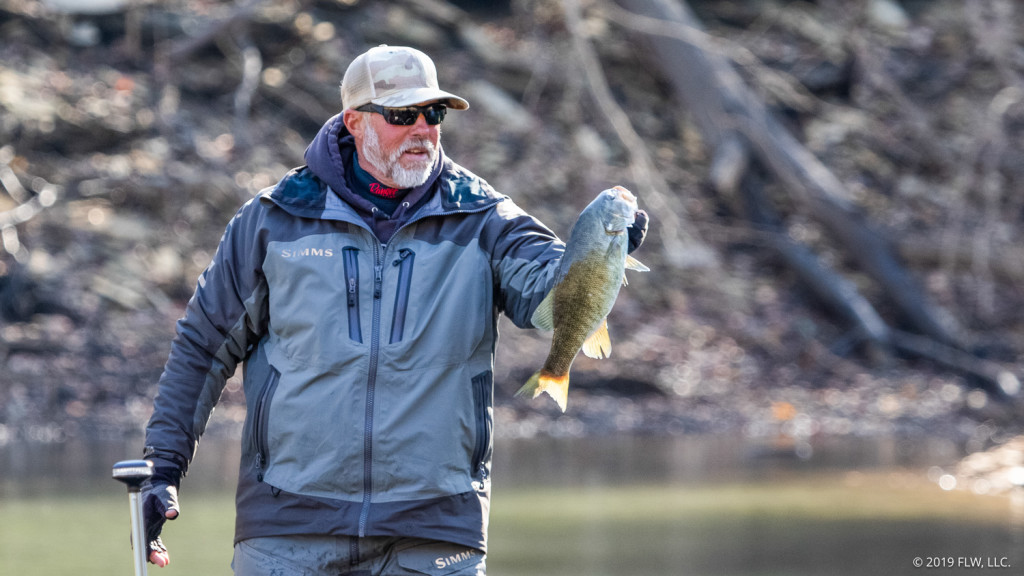 Smallmouths dominated at the 2019 Costa FLW Series Championship on Lake Cumberland. Oklahoma’s Andrew Upshaw led the way with brown bass caught on a jig and a Ned rig on bluff bank transitions in the reservoir’s lower end. Behind him, only a couple of pros hedged their bets on targeting largemouths. The rest fished for smallies and considered green bass to be bonus fish and spotted bass to be limit fillers on the tough days.

Click here to read how Upshaw caught the winning fish for his second major tournament victory of the season. Read on to learn more about what worked at Cumberland in a chilly autumn championship. 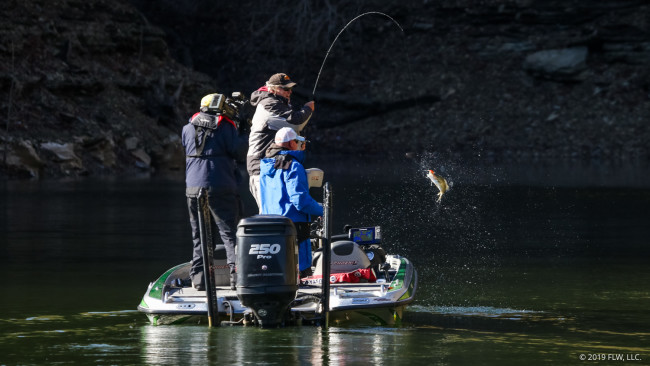 2. Burns cranks all day on no practice

With all the information available about Lake Cumberland on FLW’s website, including practice coverage from this week and past TV shows, Rob Burns felt confident in his chances of catching smallmouths despite not being able to get away from work to come up and practice.

The roofing contractor showed up on day one, launched his rig and ran to the lake’s lower end to sling a series of crankbaits. His strategy was to work as fast as he could to put his baits in front of as many aggressive “easy ones” as he could.

“I caught all my fish on Wiggle Wart-style baits,” says Burns, referring to the iconic “hunting” crankbait that’s popular on highland impoundments. “Some were actually a Wiggle Wart. Some were a Luck-E-Strike G5. I caught a couple big ones on a 6th Sense Curve. But they’re all the same kind of bait. It’s all crawfish orange, for whatever reason. I don’t know if it made any difference, but I got bit on that color so I just stayed with it.”

Without any practice, Burns didn’t have a GPS full of waypoints. He had to continuously hunt around to find what he figured was the right kind of bank based on where he caught 13 pounds, 9 ounces on day one. On the final day, however, after a two-hour fog delay, he says he hunkered down in one area where he’d gotten bit and tried to be as efficient as possible.

Most of Burns’ best spots were along points and in small pockets near the mouths of major creeks, but he also caught some on the main lake.

“Right now, there’s a lot of the lake that doesn’t have rock. It has pulverized gravel or black [substrate] because it’s been underwater all these years,” Burns says. “It wasn’t so much bluffs I was looking for. I wanted to see more of a 45-degree angle, which was better. Chunk rock or table rock was best, but sometimes it didn’t matter.”

If he found the right bank and there was some wind blowing in on it, Burns was confident he could get bit burning his crankbait. On day two, he moved into second place with 14-10, then finished with 13-2. If not for a squeaker he weighed in that final day, he might’ve caught Upshaw for the win. 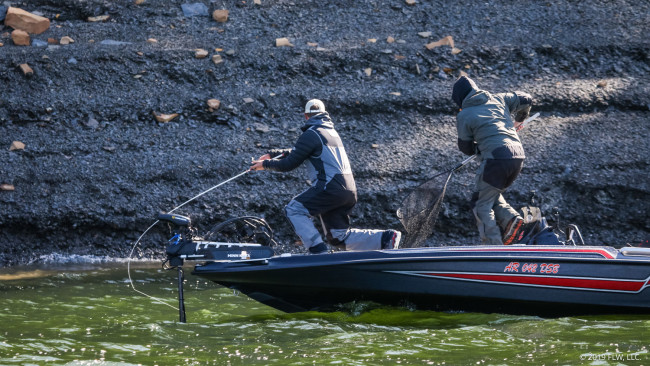 “One was cranking stretches of bluff wall,” he says. “The bluff had to go down into the water. There couldn’t be a transition above the water, and it couldn’t just be a long stretch of bluff. If I could find a transition from chunk rock to boulder rock or shale, with like a 50-yard stretch of the bluff, that was key. Most of that that I found was down in Indian Creek.

“The second pattern was 30- to 40-foot trees, junk, laydowns, sunken logs in the middle of the guts of the deeper pockets. They’d have suspended fish around them. You’d never know if it’d be a keeper spot, or, like today [Saturday], I caught a 3-pound smallmouth doing that.

“And then the third pattern was trees that had fallen down on bluffs in 15 to 20 foot, and that was where I caught my bigger spotted bass. I’d just pitch a drop-shot. Some of them were above water, and some had slid down below water. I caught a couple key spotted bass doing that.” 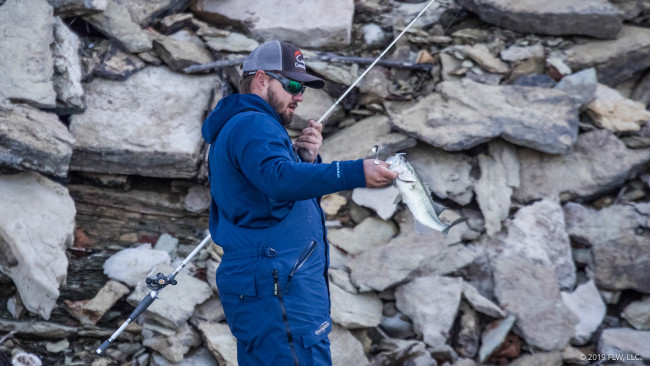 “Every fish I caught I caught on a spinnerbait, and I was keying on main-river banks that had chunk rock and stumps,” says Plunkett. “But the biggest key was how the banks lined up with the channel that runs through the lake. It had to be a channel-swing bank.”

Plunkett never ran more than about 12 minutes from the takeoff at Cumberland’s upper end. He dialed in six or seven spots, but three of them produced most of his weight.

His spinnerbait was a 1/2-ounce double-Colorado by Coosa Custom Baits tied with a yellow skirt with a little bit of chartreuse.

“I was keeping the bait within 2 feet of the surface at all times, fishing it very quickly,” Plunkett says.

Most of his fish came out of about 6 feet of water. He weighed in a mix of largemouths and smallmouths. 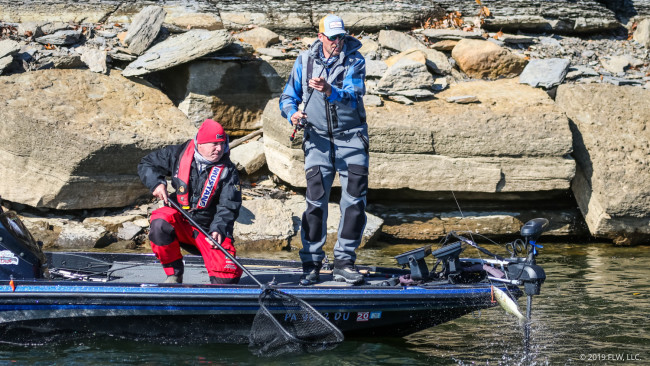 Travis Manson kept things simple at Lake Cumberland. He cranked with a Rapala DT 14 in either brown craw or red craw, or a SPRO RKCrawler 55 in red craw. To follow up the cranks, he used a drop-shot with a Roboworm Straight Tail Worm in morning dawn.

“It was all rocky bluff banks next to channel swings within 15 miles of the dam,” he says.

Manson rotated six or seven spots on the main lake or within a quarter-mile of the mouths of creeks to catch mostly smallmouths, though he weighed in one largemouth on the final day.

His best areas were 16 to 20 feet deep, and he worked the drop down into that depth range. 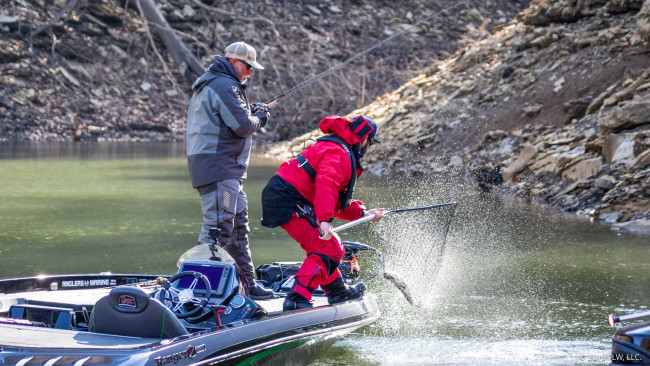 6. Salewske targets smallies with a jig

Sticking with the trend of keeping it simple was California’s Rusty Salewske, who fished one creek and a few main-lake spots in the mid-lake stretch of Cumberland using a 3/4-ounce green and brown custom-made football jig with a Reaction Innovations Sweet Beaver trailer.

Salewske’s presentation was interesting. Instead of dragging the jig, he worked it along by giving his reel one or two cranks, then letting the jig fall. It allowed him to cover water and keep from snagging constantly in the rocks. Whenever he hit a piece of wood, he worked the jig through the branches.

“They were really relating to wood, not in it but just to the left or just to the right or just in front of it,” he says. “Most of it’s just natural wood, I think – like a laydown. A couple of them are big. They look like the top of a tree, but lying down.”

His best banks were steep – at least 45 degrees. In addition to the big trees, Salewske targeted a few brush piles, particularly on the main-lake spots, where local fisherman have sunk brush on the corners of small indents along the bank.

Salewske was consistent the first two days, but the fog-shortened day three really hurt him, as he weighed only three bass to total up 33 pounds, 10 ounces for the tournament. 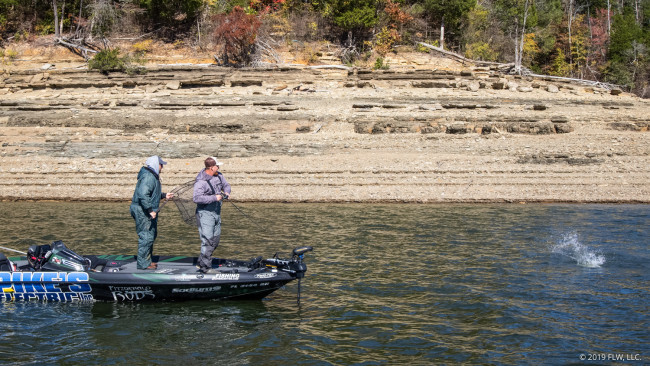 Florida’s Laramy Strickland caught his fish grinding a red SPRO RKCrawler 55 into the bottom or banging it off trees on the main lake. He says the bite was sort of random, just catching a fish here and a fish there, but the smallmouths he was catching consistently weighed 3 pounds or more. The biggest issue was that he never got more than about six keeper bites per day.

“I just ran around the main river and cranked transition areas from mud to bluff, from chunk rock to mud, but it had to have trees on it,” says Strickland, who stayed in the mid-lake area. “I found one little stretch where there was a huge school of smallmouth offshore, but I couldn’t get them to bite. But every time they pulled in, I’d catch them.”

Strickland’s trees were small and still standing – remnant bank growth from when Cumberland was drawn down for several years to repair the dam. 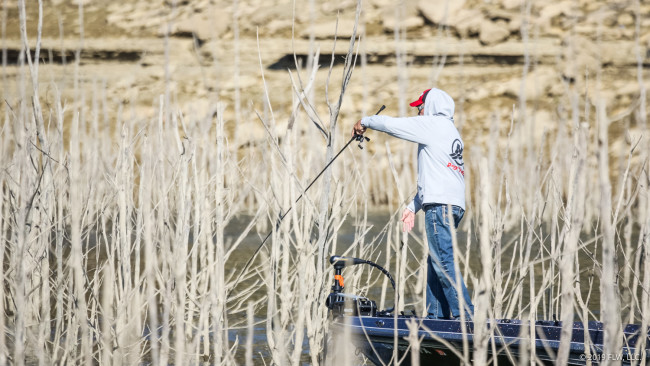 Ohio’s Steve Floyd is not a smallmouth fisherman. He’s a shallow-water power-fisherman who loves to flip for largemouths. That’s why he stuck to his strengths and ran to the back of Fishing Creek to flip for green fish in clusters of young standing timber.

Floyd was certainly around the quality of fish needed to win. A few lost fish on day two and the shortened day three (his bite was best in the first and last hour, but day three had a fog delay and early check-in) eventually snuffed out his chances.

“I felt like the key for me was getting in behind, because everybody was kind of staying out deeper. Some of those trees are in 3 to 5 foot of water, and I felt like we got most of our bites for a couple days in a foot of water up close to the bank.”

He says he caught most of his fish flipping to a tree or slightly past it and letting it swing back, but also caught some swimming the Pit Boss. Even after catching only three bass the final day, Floyd still weighed in 30 pounds, 6 ounces for the tournament. 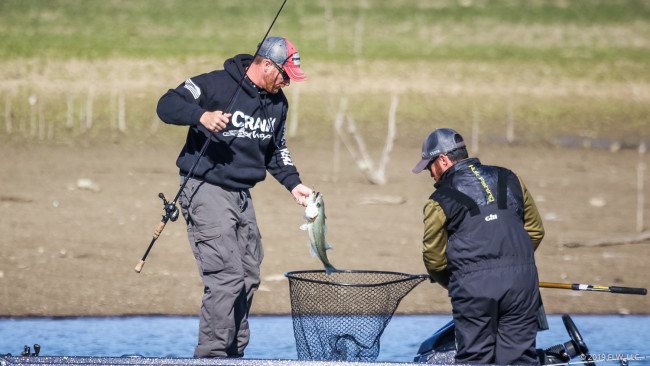 Missouri’s Brent Algeo also camped in Fishing Creek and targeted largemouths (he did weigh two spotted bass) from 6 inches to 3 feet deep, but instead of flipping like Floyd, Algeo fished moving baits.

He started with a black Berkley Choppo topwater, which produced four keepers the first day, including a 6-pound kicker. He says he had the bites to be leading that day but couldn’t get them all in the boat.

On day two, they wouldn’t eat the topwater, so Algeo switched to winding a War Eagle spinnerbait in the spot remover color with tandem gold and silver willow-leaf blades and a Reaction Innovations Skinny Dipper trailer. The fish were choking on it, he says.

Algeo caught the most fish of any day on Saturday, but the size wasn’t there.

“I fished one stretch most of the time, and it wasn’t getting near as much pressure as the other areas were,” Algeo says. “The main thing was to pay attention to the shad, and whenever the shad would come up to the top and the wind would kind of change directions, you could see the life kind of come up. You had to bounce from spot to spot and circle back through because those fish were kind of like blueback herring fish, and they’d chase those shad. It was just little flurries.” 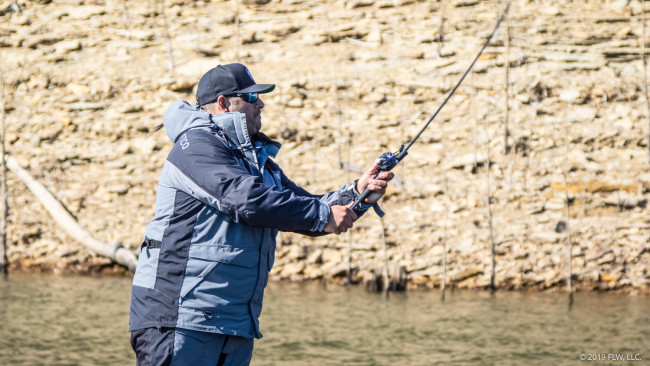 10. Valdivia catches smallies with a jig

David Valdivia is another top-10 finisher who made the long trek from California.

He caught only smallmouths using a 3/8- or 1/2-ounce Deek’s Custom Jigs football jig in green pumpkin with a craw trailer.

“All my fish related to either stumps or a random rock that was on mud or any kind of gravel – something big out there on a flat that they were relating to,” Valdivia says. “Every fish I caught was on the main lake.”

He tried to get a few bites on an umbrella rig and crankbait, but never could get that bite going. All of Valdivia’s fish came from two stretches in the mid-lake area. He weighed in a three-day total of 24 pounds, 1 ounce.