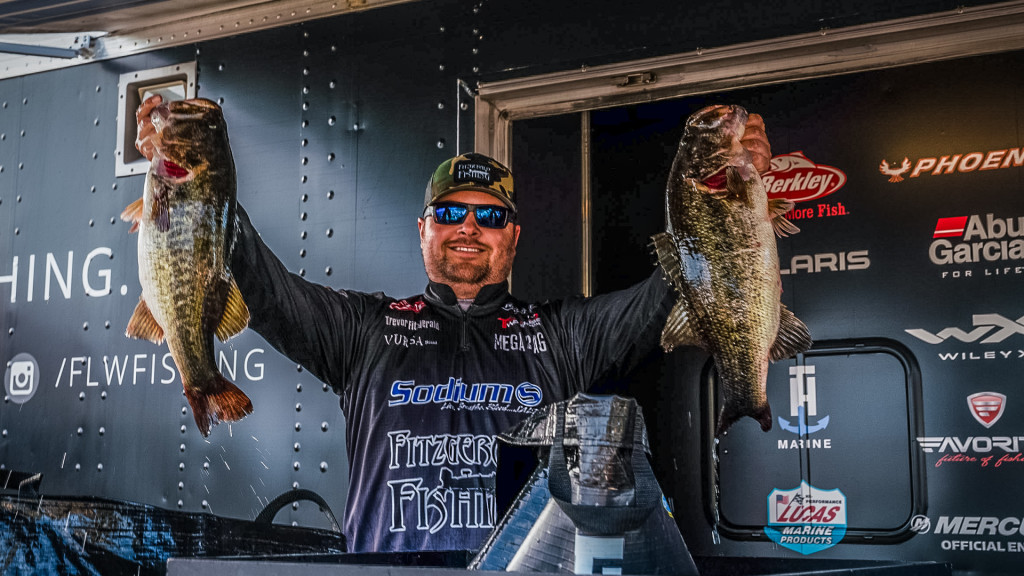 Trevor Fitzgerald grew up just minutes from Lake George, a short boat ride from where the Toyota Series Southern Division launched for the opener on the St. Johns River. That experience on George – and one spot in particular – is ultimately what propelled Fitzgerald to 57 pounds, 12 ounces over three says and his second win on the fishery in FLW competition – his first in the Toyota Series.

“I’ve been wanting this one for a while,” Fitzgerald says of winning at the Toyota Series level. “It’s awesome. It feels great.”

The spot at which Fitzgerald did most of his damage this week was one no one else seemed to find, potentially due to how shallow it was. It’s essentially a long sand bar at the far south end of Lake George that takes a while to idle into.

“That spot saved me,” he explains. “It’s definitely different for sure. It’s hard to get in there, and it really doesn’t get that much pressure. That’s the good thing about it.

“It’s just a depression surrounded by super-shallow water. I used to put in at that boat ramp right there when I was a kid, so I was kind of familiar with the bottom the way it lays out.”

What Fitzgerald was fishing was basically a long depression that might qualify as a ditch, which served as a staging area for fish coming to the bank to spawn. Because fish haven’t moved up en masse, it was the perfect spot for Fitzgerald to get into the right group of fish at the right time. 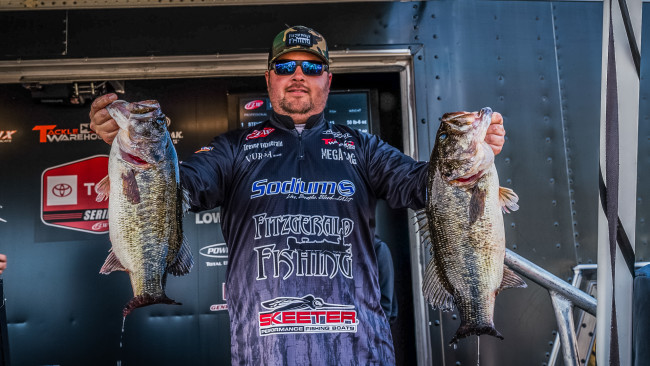 Of course, it also took the right presentation to get the job done. Fitzgerald says the fish were “biting funny” on day three, likely due to high pressure, sunshine and lack of clouds, and he needed to do some downsizing to land his best fish.

“I lost a nice one and set the hook multiple times – nothing – and picked up the shaky head and caught a 6 and then a 3,” he says. “We really had to slow down today and get real finessey.”

While Fitzgerald milked that depression in Lake George for parts of days two and three – with incredible success – he did have some other areas to fish. On day one, the Belleview, Fla., pro reached into his bag of tricks and junk-fished a lot of areas he checked in practice. The problem was, the changing conditions and less-than-ideal water conditions made many of those spots unsustainable.

“The thing is, a lot of my areas got changed with this wind,” he said after day one, which he led with 21 pounds, 2 ounces. “Parts of the river are really muddy right now, so I’m just trying to find clean water.”

Knowing that at the time, Fitzgerald decided his best plan after day one would be to run new water and try some new things. And it’s a good thing he did. 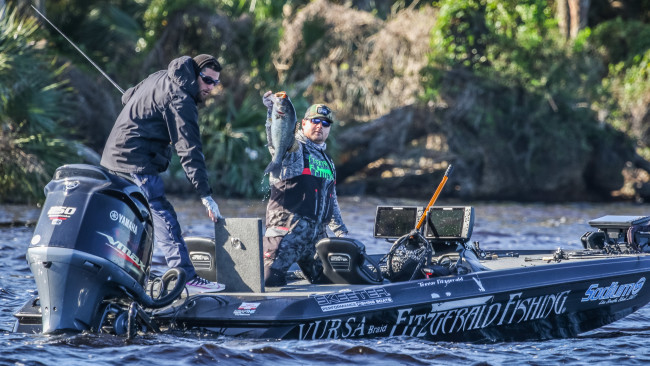 Ultimately, it was knowing the St. Johns and understanding its fish that allowed Fitzgerald to bring home the hardware.

“A lot of guys that were fishing the bars the first day did all right, and then they complained yesterday it went away, but I think those fish came in and just put them right where we could catch them,” he says. “It brought fish in closer to where they were easier to target.”

Fitzgerald has fished in Florida his whole life, and he’s done well in a lot of tournaments on the state’s many fisheries. But this one just felt different for the 37-year-old pro.

As part of winning a Toyota Series tournament, Fitzgerald automatically qualifies to fish the 2020 Toyota Series Championship for a chance at up to $200,000, thanks to FLW’s win-and-you-are-in format (with entry in all three tournaments in that division).

“I’m looking forward to this championship,” he says. “I think FLW really stepped up with this year’s championship. The amount of money that’s on the line sounds incredible. I’ve always enjoyed going to the Series championships.”

That’s all well and good, but Fitzgerald isn’t looking too far ahead. He still wants to spend some time soaking up his win on the St. Johns and what’s now (for now, anyway) his favorite lake in all of Florida.

It’s not Okeechobee or Toho or any of the other many famed fisheries in the state. It’s one specific, special body of water on the St. Johns River system.