Despite Cold, Expect Mega-Bags at Chick 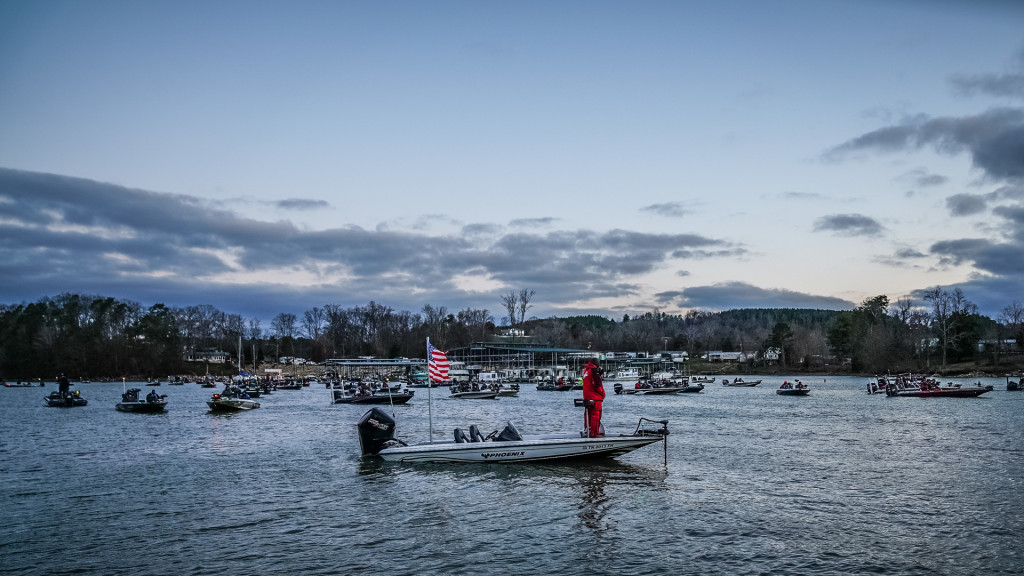 In two recent local tournaments on Lake Chickamauga (with three-bass limits), winners have weighed in 22 or 23 pounds of bass, with one big fish breaking the 10-pound mark and another breaking the 12-pound mark.

“With this cold front moving in it’s going to be tough, but these boys will find them,” says local fishing guide and tournament angler Capt. Chris Peters. 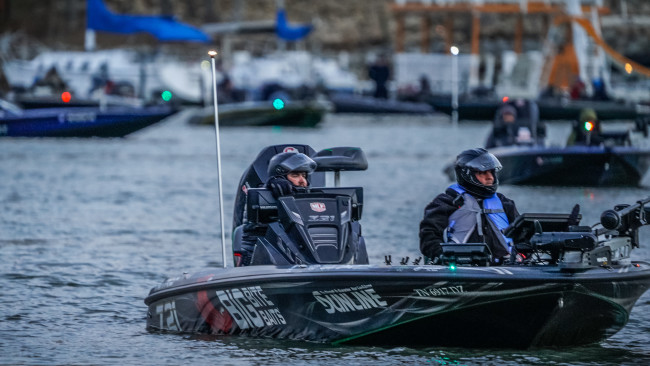 Covering about 36,000 acres with 784 miles of shoreline, Lake Chickamauga on the Tennessee River stretches 59 miles upriver from the dam to Watts Bar Dam. Chickamauga is named for a tribe of Native Americans that broke away from the Cherokee Nation in the 1700s. They lived in villages along North Chickamauga Creek, which joins the river just below Chickamauga Dam. Before TVA created Chickamauga and other reservoirs above Chattanooga, the city had one of the most serious flooding problems in the nation.

The lake has gained national fame in recent years as one of the better largemouth bass fisheries in the country. In the year 2000 the Tennessee Wildlife Resources Agency began an experimental program, annually stocking Florida-strain largemouth bass fry. It took several years for the program to take hold, but now hardcore bass anglers are routinely catching 10-pound-plus largemouth bass.

The folks with FishDayton.com, the local Toyota Series host, documented more than 110 largemouth bass that broke the 10-pound barrier in 2019, and they know there were many more caught that were not documented.

In February 2015, Gabe Keen broke the 60-year-old Tennessee state record for largemouth when he boated a fish that weighed 15.3 lbs.

According to Major League Fishing Bass Pro Tour angler Michael Neal, who lives on the shores of Lake Chickamauga, the quality of the bass fishing at his home fishery remains at an all-time high.

The minimum length limit for largemouth bass is 15 inches. The lake contains a few smallmouth bass, minimum length limit of 18 inches with a one-fish-per-angler creel limit. Many predict it will take a cumulative total of 60 to 70 pounds in this three-day tournament to wind up in the winner’s circle.

“If at least one person doesn’t have a 30-pound bag throughout the tournament, I’ll be shocked,” says Neal. “I think the lake is as healthy or healthier than it’s ever been, numbers-wise especially.”

“Yeah, somebody will catch a 10-pounder during this tournament, and I’ll be surprised if nobody busts 30 pounds one day,” says Peters. “But you’ve got to consider the cold front coming in.” 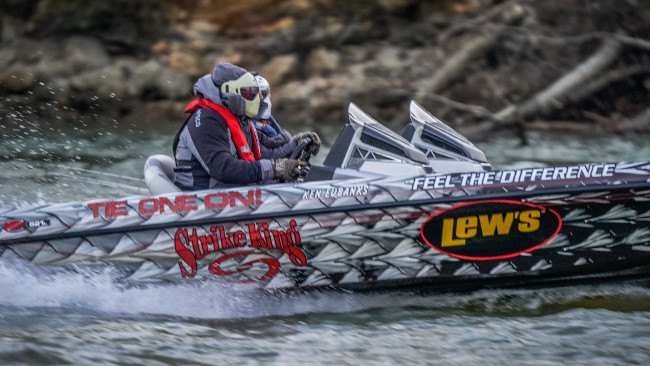 After recent moderate temperatures a cold front is moving in on Thursday, bringing with it a forecast high of only 45 degrees and similar conditions in the coming days.

“I don’t think the cold front is going to hurt them Thursday as bad as it might Friday,” says Peters. “It’s often the second day after it turns real cold that hurts them. I think Friday is probably going to be the toughest day.”

Lake Chickamauga currently sits at about 677.3 feet above sea level. Normal level this time of year is 676. Three weeks ago, the area was hit by massive rainfall, pushing the lake above its normal summer level of 682. Then the Tennessee Valley Authority pulled the plug, lowering the level to 675. But the slow rise in recent days should help the FLW anglers.

Flows, however, are around 97,000 cubic feet per second, or about three times normal. The high current often repositions bass from normal hangouts, however, it can also concentrate the fish. That means find a concentration and it can potentially be game on.

Water colors are stained or dingy in many of the creek-fed areas while it is much clearer on the main channel.

Navionics pro Miles Burghoff lives in Soddy Daisy near Lake Chickamauga. Due to other commitments he only got to practice Wednesday morning.

“They’re in a typical river, current-break kind of situation … at least the fish that I’m focusing on,” says Burghoff. “But they’re not totally grouped up like you’d expect. You can catch a couple in an area, but it’s not gangbusters, you know. There are fish right on the main river channels on those current breaks, and there are some that are way in the backs of creeks, so there’s a variety of things you can do to target them.”

Jeff Dyer, an FLW pro from Ohio, has been practicing on Chickamauga for five days.

“It’s been a tough bite for us until today,” says Dyer. “We finally figured out a little bit of stuff today. Four fish in four days, and then we caught five in a couple of hours this morning and left them alone.”

Speaking from the water before lunchtime on Wednesday, Capt. Peters was having a similarly challenging time getting bites.

“It’s been tough,” he says. “We’ve caught four this morning. We’re not getting lots of bites, but we’re catching quality.

“In shallower, dirty water anglers are likely to be throwing lipless crankbaits,” Peters adds. “In clean water, jerkbaits, swimbaits and A-rigs are more likely to come into play.”

“There will definitely be a lot of fish caught, and they’ll be all spread out,” says Neal, who has five career top-10 finishes on Lake Chickamauga in FLW competition. “It could be anything from a shallow, 1/4-ounce lipless bite to a 3/4-ounce swimbait bite in 15 feet of water. The weather is going to dictate everything.”

Nick Ratliff, FLW pro from Kentucky, expects the conditions to have other impacts on where anglers choose to fish.

“I’m having trouble catching fish in the current, and I feel like it’s going to make the lake fish a little smaller than it normally would,” he says. 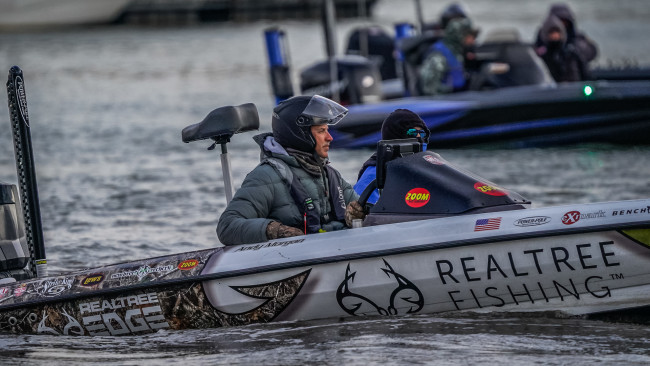 The current – Extremely high flows on the river will most assuredly reposition some fish.

The cold – After several days of moderate temperatures, FLW anglers are looking at lows around the freezing mark and highs in the mid-40s, with clear or at least partly cloudy conditions. The cold front could make the bite tougher than normal.

The competition – The Chattanooga Bass Association, one of the largest local circuits on Lake Chickamauga, has a tournament Saturday. That means a lot of extra boats that could also be fishing key areas the pros have located.

“I’m hearing that it’s tough. But it’s Lake Chickamauga,” says McWha. “There’s going to be a lot of guys that catch one, two or three fish … but you’re going to see guys with those mid-20-pound bags.”

“I tend to fish downlake,” says Burghoff. “I don’t know uplake, and I’ve been beat uplake many, many times. I think there’s a bigger population of fish down south, but with low water it might be easier to find bigger groups of fish up north. With fish seemingly scattered, I think it’s wide open for anybody.”

“We’ve got all the locals fishing,” adds McWha. “Wesley Strader, Andy Morgan and I hear Michael Neal was driving back overnight [from a Florida MLF event] and going to be here. But you never know. There can always be somebody from out of state who’s never been here but finds something nobody else has.”