20-pound final-day limit seals it up for Tennessee pro 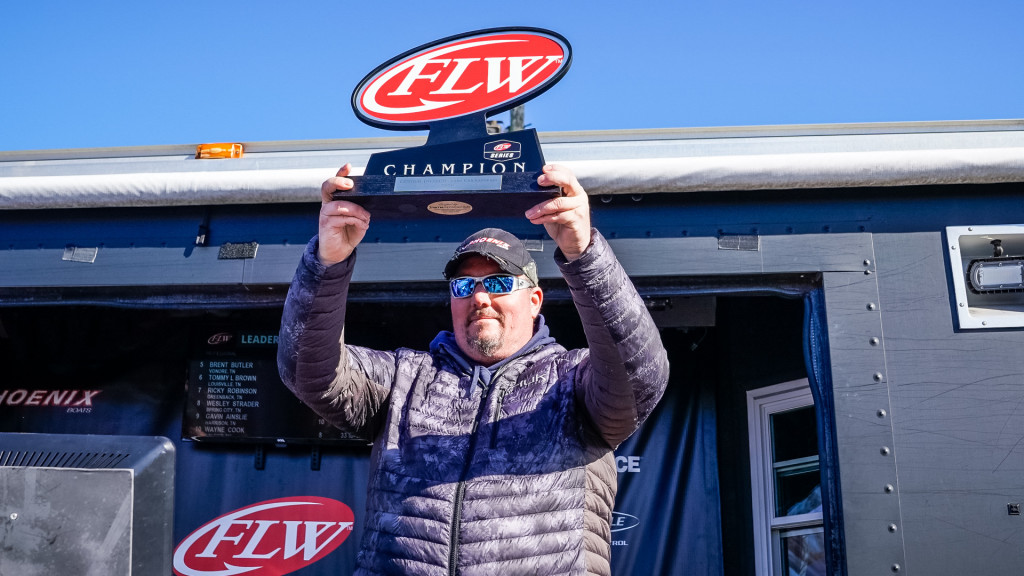 Jim Neece Jr. might not have had the biggest bag of bass every day, but he was probably the most consistent during the 2020 Toyota Series Central Division tournament on Lake Chickamauga. He caught 18-11 on day one, 18-1 on day two and 20-9 on day three (which was the biggest limit of the day) to claim the win.

Neece, from Bristol, Tenn., left the takeoff point Saturday with high hopes. But during the first hour he got worried after only putting one 15-inch bass in the livewell.

“The water came up, and I think the fish just left. They moved shallow,” says Neece. “It completely shut them down [in that spot]. I couldn’t believe it.”

Neece had three areas, all points and breaks on the main river, that he had been fishing consistently. About 9 a.m. he headed for spot No. 2 near the mouth of Richland Creek. He caught another keeper, and then five minutes later a 4-pounder loaded up on his Zoom Swimmer. When the fish hit the net, Neece let out a scream of excitement that folks probably heard back in Dayton.

“I calmed down a little after that, but once I got that bite right there I knew this upper side was going to pay off today,” he says. “I fished two points the rest of the day.”

No doubt, it was especially gratifying following a poor practice. Neece says he and his father, Jim Neece Sr., started practicing on Monday and fished for nearly two days without catching a fish.

“I started out throwing an A-rig, but it just wasn’t doing it,” Jim Jr. says. “That second day, Dad tied on a swimbait and started wearing me out. I tied one on, and that’s the only bait I’ve thrown the entire week.

“It’s a Zoom Swimmer, chartreuse and blue,” he adds. “The only thing I did different is I used an 8:1 gear ratio [reel], which I usually don’t do. It allowed me to keep that swimbait swimming in that current the way it needed to swim. A lower gear ratio wouldn’t allow me to keep up with it.” 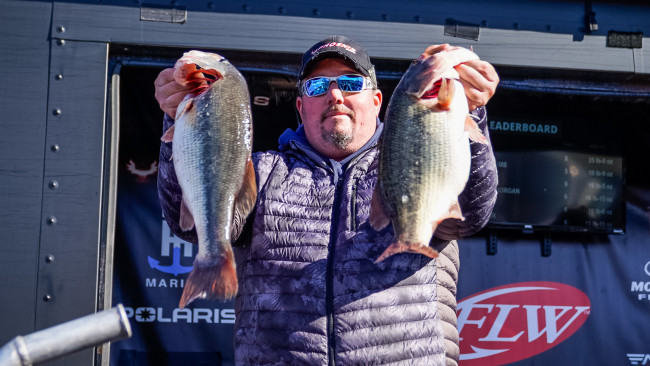 Jim Jr. says patience was also a major factor, especially since he was only fishing two spots.

“My co-angler today got a little frustrated watching me make 50 casts at the exact same spot. But then on that 50th cast I’d catch one.

“I think every 15 to 45 minutes a fish would roll up to feed, and I’d catch it,” he says. “Then you’d go 15 minutes or even an hour with nothing and then catch another one.”

He agrees that it was a little bit like deer hunting.

“Yep, you just had to sit and wait. I really think that’s what it was.”

The champ uses forward-looking sonar on his boat. On Saturday, he wasn’t really depending on it in the situation he was fishing, but he says it did come into play.

“I could actually see them bite my swimbait,” he says. “The only thing that really served me on my electronics here was the map. That was it. Keeping it where I needed to be.” 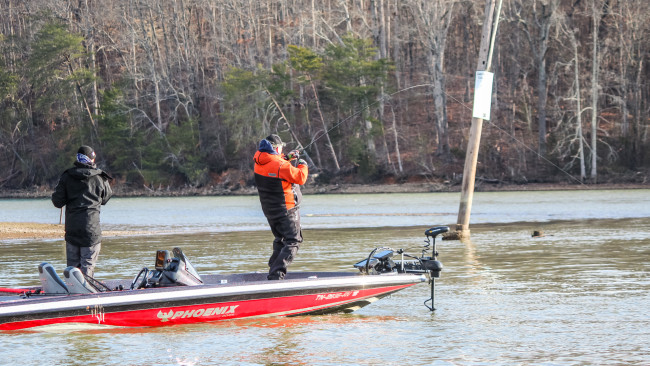 Jim Sr. fished on the co-angler side and came in 53rd place. But the elder Neece says it was an incredible experience watching his son climb to the top and hold up the winner’s trophy.

A third generation of the Neece family also fishes competitively. Corey, son of Jim Jr., is a sophomore on the Tackle Warehouse Pro Circuit.

Lake Chickamauga provided two other highlights in the form of two bass exceeding the 10-pound mark. On day two of the event, Rusty White, pro angler from Soddy Daisy, Tenn., came to the weigh-in with only one bass, but it weighed in at 10-15. A second double-digit bass weighing 10-12 was caught by co-angler Derrick Myers from Corbin, Ky., on Friday. That bass helped propel Myers to the win on the co-angler side.

The event was hosted by FishDayton.com and the Rhea County Economic and Tourism Council.