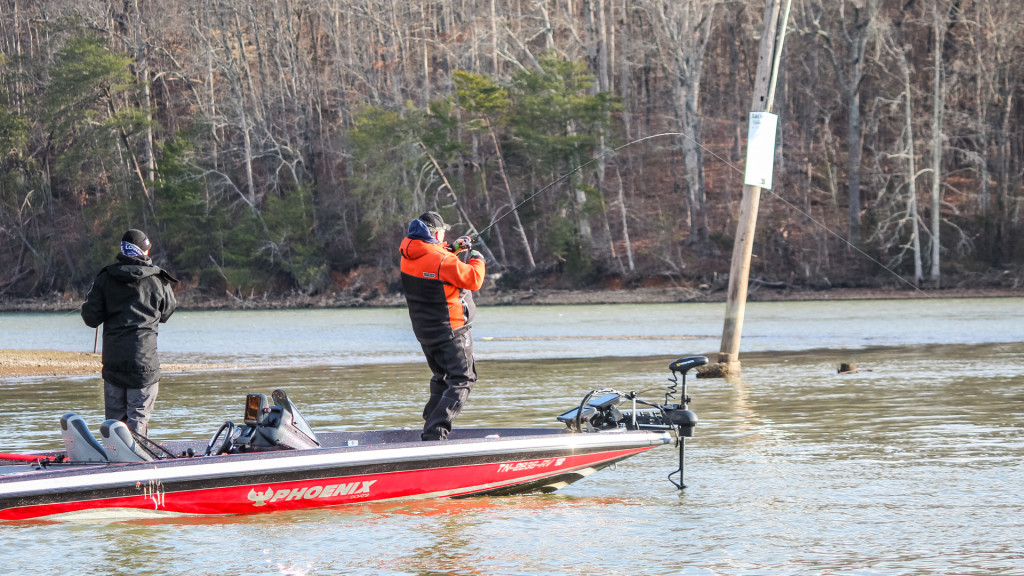 In February, with water temperatures in the high 40s, no one expected a fast and furious bite during the 2020 Toyota Series Central Division tournament on Lake Chickamauga. What everyone hoped for was quality fish.

There were two 10-pound-plus bass brought to the weigh-in stand, but it appeared consistency was the name of the game, at least for the winner, Jim Neece Jr. of Bristol, Tenn.

Neece was one of eight Tennesseans to make the top 10, and five of them were basically local anglers. Here’s how all the top finishers caught their fish. 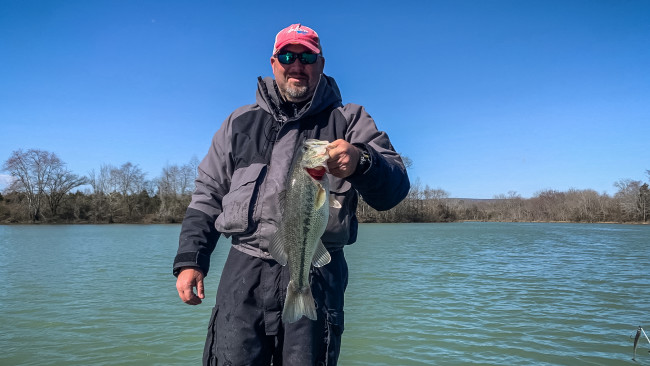 Brian Elder finished day two of the three-day tournament in the No. 1 spot, but he came up just shy on the final day.

“I had to use my push pole to keep back in there,” says Elder. “It was really tough, but once I got back there, I sort of had a captive audience. I knew the fish were there. I just had to figure out how to catch them.”

Elder threw the tackle box at them. He says every day was a little bit different, but his key baits included a craw pattern tungsten “slither rig” made by Jig Shack, a red lipless crankbait and a SPRO Fat John 60 crankbait. He also relied on a 3/4-ounce black/blue jig made by Z Lures.

This was the fifth top-10 finish in FLW events for Elder. 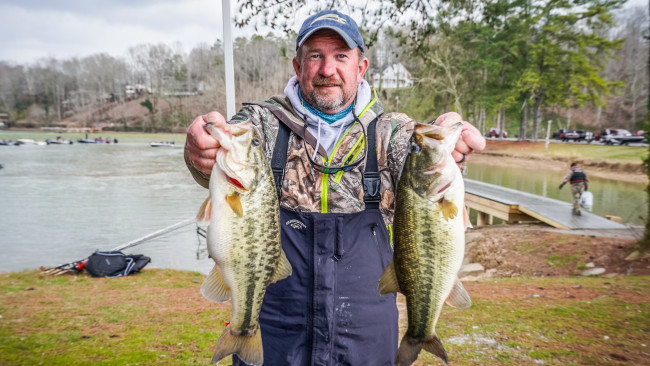 This was the fourth top-10 FLW finish for Steve Barnes, a local angler from Harrison, Tenn. He found all of his fish offshore on Lake Chickamauga. Even though he was staying well offshore, Barnes was fishing shallow water along mid-lake sandbars and river-channel breaks with a True Bass 4.5 swimbait on a 1/4-ounce head.

Barnes says he would catch a few fish in the morning, but most days his fish didn’t really fire until midday.

“I’ve got three bass in the livewell,” he told the camera boat at about 10 a.m. Saturday. “But these fish won’t really bite until about Noon. I’m just killing time right now.”

He says he was handicapped on the final day when he left the area to check another spot. When Barnes returned around Noon, another local angler who had been hovering nearby in the morning had moved in on his spot. 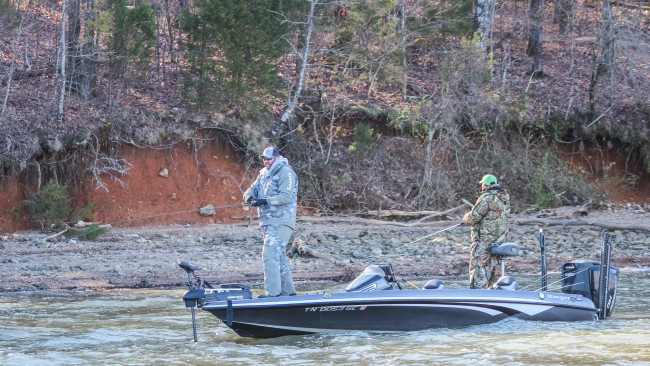 Josh Norris from Spring City, Tenn., also considers Chickamauga his home lake. He had a tremendous show of support among the large crowd during the final weigh-in.

Norris relied heavily on one half-mile stretch of bank on the east side of Chickamauga, mid-lake, that held numerous blowdown trees.

“Every day I had a good wind blowing in on that bank,” says Norris. “Those trees would just reload with fish every night.”

“I was just really crawling them through the treetops,” he says. “Sometimes I might have to make five or six casts to hit it just the right way to trigger a bite.”

“It was just a blessed week,” Norris told folks watching in the crowd and on the FLW Live stream. “My goal this week, I just wanted to get a check. And to be here on the third day in the top 10, you just couldn’t ask for anything more.”

This was Norris’ first-ever top-10 finish in an FLW event. 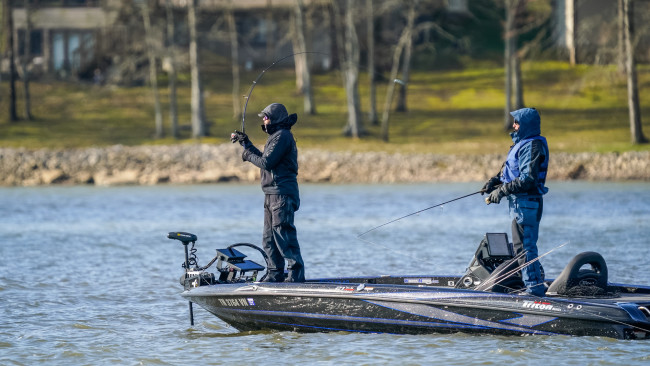 Brent Butler won the Toyota Series event on Lake Chickamauga in March 2019, bringing in a massive bag weighing 37-5 on day two of that tournament.

“I still think about that day,” he told folks at weigh-in the final day. “I was thinking about it today.”

Obviously, Butler was really hoping to go back-to-back, but it wasn’t to be.

Butler, from Vonore, Tenn., was fishing a 1/2-ounce  Strike King Red Eye Shad in shallow water. When he moved deeper, he picked up a Lucky Craft Flash Pointer jerkbait.

Butler visited the area where he caught the huge bag of bass in 2019 several times during this tournament. He says it just wasn’t set up right.

“They’re getting there,” he says. “But we’ve had a lot of water fluctuation up and down this year, and that spot just needs the water to be stable and a little warmer.”

Butler says he “swung for the fence” on the final day. At 1:30 he only had one keeper bass in the livewell.

“I ran around and bailed out [on looking for big ones] and got five, so I’m just happy to be here,” he says.

This is Butler’s third top-10 finish in an FLW event. Butler was apparently a great “guide” as both of his qualifying-round co-anglers made it into the top 10, and his final-day co-angler, Derrick Myers, actually won. 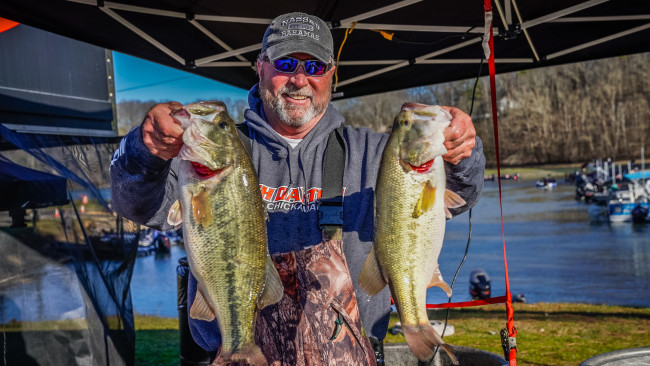 Tommy Brown hails from Louisville, Tenn., just south of Knoxville and just over an hour’s drive from Lake Chickamauga. This was his fifth top-10 appearance in an FLW event.

“I had to scrap everything this morning,” said Brown at the final weigh-in on Saturday. “I went back to where I’d been catching them and had to share the area with about five other boats and only got one keeper out of there.”

That sent Brown on the hunt with his primary bait, a SPRO Aruku Shad Jr. in mudbug red. However, on the final day he caught a couple of fish on a jerkbait.

He only found four keeper bass on the final day, but it included two quality spotted bass.

“I caught them all really shallow, in 2 feet of water or less,” says Brown. “I’m fishing a smaller 1/4-ounce bait on 20-pound-test line because I want it to stay high in the water column and keep up out of the grass. The mudbug does a good job for me down here.

Brown was also depending on making very long casts.

“My co-angler was saying, ‘My goodness, your casts are going twice as far as mine,’” says Brown.

He was using a 7-foot, 11-inch Shimano Crucial rod and says he could nearly cast all the line off his reel. 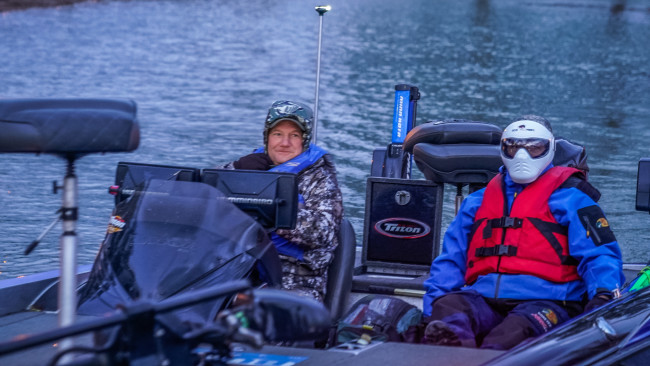 Ricky Robinson from Greenback, Tenn., caught all his fish on a 5-inch Driftwood Custom Baits Swimbait in shad color.

“I’ve not seen a lake yet that bait won’t catch fish on,” says Robinson. “I caught every fish on that lure except for one I caught on a jig.”

His lure choice provided Robinson with a head full of confidence, which he insists is critical. 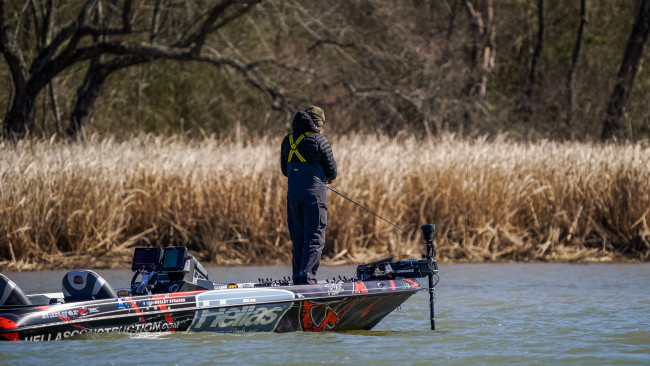 Veteran pro Wesley Strader wasn’t able to practice for this event, which began on Thursday, because he had just returned from the Major League Fishing Bass Pro Tour Stage Two event on Lake Okeechobee about 700 miles away from Dayton.

“I felt pretty good for no practice,” says Strader.

The Spring City, Tenn., pro says he got lucky on day one when he just happened upon a spot where several bass came up schooling.

“It’s a thing they do this time of year,” he says. “It’s February. They get shallow. They might even get so shallow you can’t even get to them at times.”

“I lost a few on the ChatterBait,” he says. “Most of them were on the spinnerbait and the Red Eye Shad.” 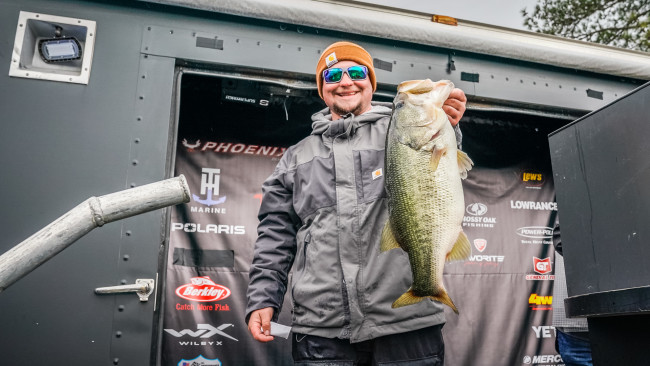 Gavin Ainslie, only 25 years old, admits that putting down big bucks to fish the FLW event was quite a gamble. But it was a gamble that paid off with a check. A local angler from Harrison, Tenn., Ainslie went into the final day in fourth place and was one of the few anglers who made the long run to fish the south end of the lake.

However, with a large local tournament going on, Ainslie says he found the area crowded and had to run around a lot more than he wanted.

“I’ve got to go get some more trolling motor batteries because I ran ’em dead today,” he said after the final weigh-in.

Ainslie says he did lose a 4-pound fish on the final day that could have moved him up into seventh place rather than ninth. This was the young man’s third top-10 finish in an FLW event. 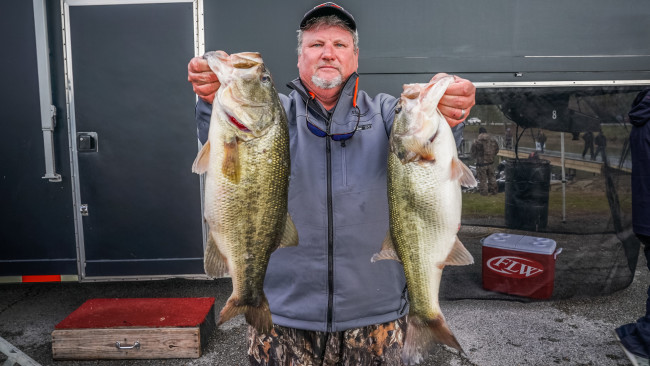 Wayne Cook came nearly 500 miles, all the way from Gautier, Miss., to fish the Chickamauga event. He brought a big bag of 22-15 to the stage on day two and went into the final day in seventh place, however, he was the only pro who zeroed on the final day.

“It just didn’t snow for me,” Cook jokes. “Us south Mississippi boys need some snow. We didn’t get any snow today [Saturday]. We got bluebird.”

Cook relied mostly on a HogFarmer Baits BFL Rig. He rigged it with Keitech Swing Impact FAT swimbaits on Buckeye Lures J-Will Swimbait Heads. Cook was casting it on a Cashion Sledge rod with a Lew’s reel loaded with 50-pound-test braided line.

“I had a great day yesterday [Friday, when it snowed], but the water came up and the mud came with it. My water muddied up on me, and I couldn’t find clean water,” he says. “I just didn’t want to abandon the fish I thought were still there, but they weren’t. They’d moved out.”

This was Cook’s second top-10 appearance in an FLW event.