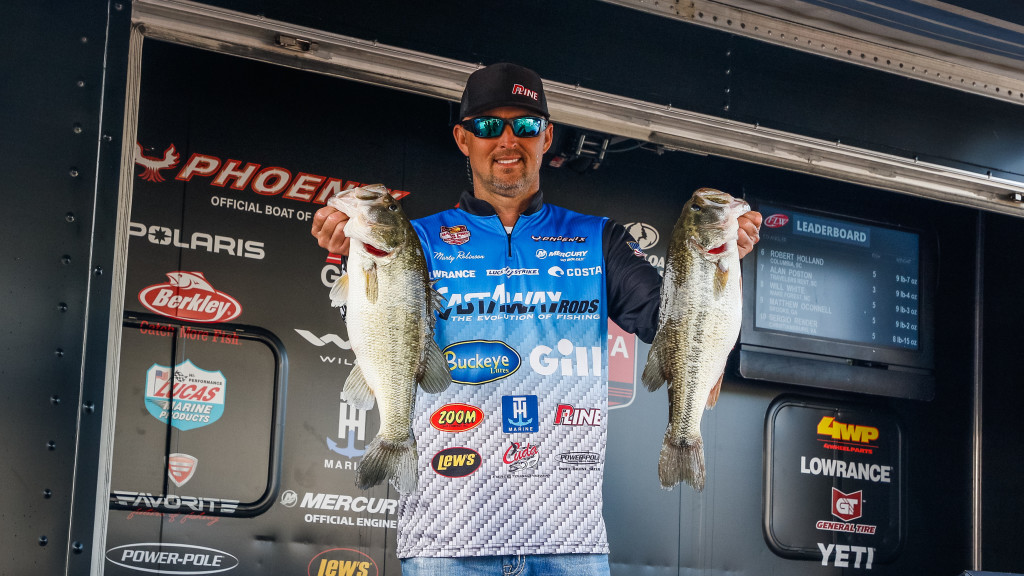 With Lake Hartwell fishing tough to open the Toyota Series Eastern Division, it came as no surprise that it took just 14 pounds to crack the top 10 on the leaderboard after day one. What did come as a surprise, though, is the tournament-leading bag MLF Bass Pro Tour pro Marty Robinson weighed in.

Robinson, who hails from Lyman, S.C., was the only angler in the 102-boat field to top the 20-pound mark with 21-1, and he enters day two with a 2-pound, 14-ounce lead over second-place pro Dustin Henson.

While much of the field felt disdain for the weather – a rainy, foggy, generally miserable day – that led to some lower weights across the board, Robinson welcomed it.

“The fog was good for me because it helped me get to my spots and pretty well stay hidden from the rest of the field,” he says. “It started up pretty quick for me, and I caught three of my keepers on a Buckeye Lures G-Man Ballin’ Out jig and another one on a Buckeye Lures Su-Spin Blade.”

He was also able to cull and add a fish to his total using a shaky head with a Zoom Trick Worm trailer after the weather dissipated later in the day and he and his co-angler, Kurt Brooks, made the switch over to deeper water.

Targeting all largemouths during the morning hours, Robinson said he was able to leave a couple of his areas with willing fish and hopes of another good start during day two of the event.

Robinson says a win at Hartwell would help him mentally to get out of a slump he’s been in so far this year after two bad finishes on the MLF Bass Pro Tour.

“This week is my number one favorite week of the year to fish Lake Hartwell,” he admits. “Regardless of the weather, you’ve just got to figure out what stage they’re in and they’re going to bite.”

Even with less-than-ideal water conditions today, Robinson says he was confident he would have a good showing if he could get to his areas first. He was fishing sites that historically, for him, anyway, have been good this time of year. The local pro says this was a welcome relief from some bad decisions he has made fishing this year when the weather and other factors have wrecked his plans.

“I was able to fish my water and it was good,” he says. “I found a couple of places in the mid-lake area in practice, and the fish were on them and still there when I came back today.”

Robinson hopes to start tomorrow where he left off mid-morning today, and his plan is to exclusively target largemouth again, first thing.

“The largemouth are better fish [than smaller, on average, spotted bass], and I’m going to commit to that in the morning, but later on in the day, it’s game on for either spots or largemouth.” 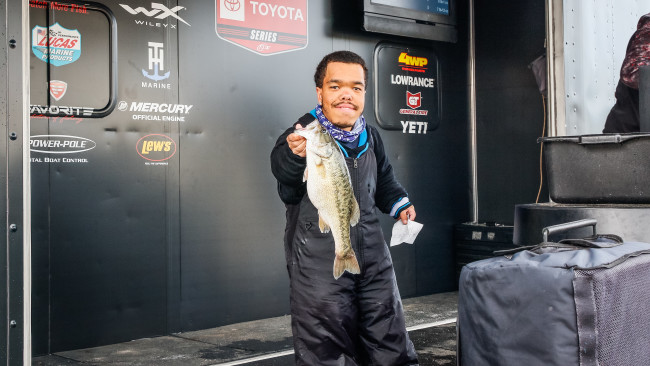 Tuesday weigh-in ended with a tie for first place in the co-angler division between Cliff Humphreys of Philadelphia, Pa., and Khris Williams of Mount Holly, N.C. Both co-anglers weighed in five-fish limits totaling 13 pounds, 7 ounces.

Humphreys says he came into the event with no plan other than avoiding the winter weather back home in Pennsylvania and gaining a little experience on Lake Hartwell.

Among the baits Humphreys used to catch his limit were a white Z-Man ChatterBait and an unknown variety of underspin jigs.

“We caught all of our fish before 11 a.m.,” he says. “I fished with Trent Palmer, and he just grinded it out, fishing very slow. We were on the south end of the lake, but I’m not sure where.”

Williams fished with pro angler Jeff Coble to catch his limit of five bass on day one. He says his best experience of the day was his first fish, which topped the scales at 3-9.

“It was great,” Williams says. “We covered a lot of water and we caught a bunch of fish. I drew a really great boater. He put us on them today.”