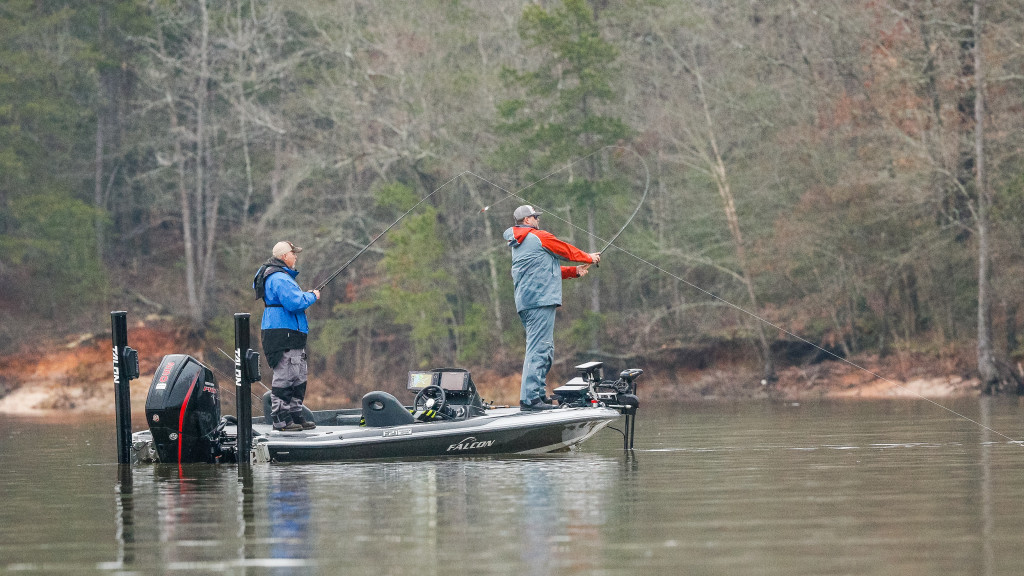 At least as of lunchtime on day two of the three-day Toyota Series Eastern Division opener on Lake Hartwell, rain showers have held off, allowing the full field of competitors to get down to business. The mild temperatures, overcast skies and lights winds seem to agree with the fish as well, as many anglers have indicated fish were being caught in shallower water today.

Pro Timothy Reams, fishing with co-angler Paul Dunn, found a nice school of fish this morning, enabling the pair to fill their limit shortly after 10 a.m.. They were primarily using white and pearl jerkbaits using a rapid retrieve on a secondary point.

“We’re poking them,” says Dunn. “We’re having fun. This guy is a great angler to fish with.”

Further down the mid lake area where the majority of the field was fishing today, Woo Daves had an early limit of fish weighing an estimated 8 to 9 pounds and was looking to cull.

Daves was primarily throwing a neutral colored Zoom worm fished on a Carolina rig, fishing along a red clay bank to catch his fish.

Boat number 9 with boater Omari Navies and co-angler Josh Quesinberry were working on filling a limit for the co-angler while Navies was working on culling when we found them.

Quesinberry had three bass in the livewell with a 3 1/2-pounder anchoring his total at midday.

He caught his best bass on a shaky head with a pumpkinseed trailer.

“I think this weather has the fish moving up,” says Navies. “Hopefully we can get on some good fish this afternoon.”

As far as big fish go, pro angler James Maupin says he only had one fish in the livewell but thought it would top the 5-pound mark.

Maupin’s plan is to run and gun and was observed throwing a variety of different baits, including a crawfish-colored jig and pig and a white spinnerbait. Maupin’s pace was fast and efficient, hitting every piece of cover, including a number of boat docks.

From the anglers we sampled, it seems like the fishing is looking up, and weights could be consistently better across the board at this afternoon's weigh-in.

Weigh-in this afternoon for day one will be held at 3:00 p.m. ET at Clemson Beach and Rec Area located at 275 YMCA Cir. in Seneca, S.C. The full field will weigh in today before paring down to the top 10 boaters and co-anglers on Thursday. Be sure to visit FLWFishing.com this afternoon to watch the live weigh-in.