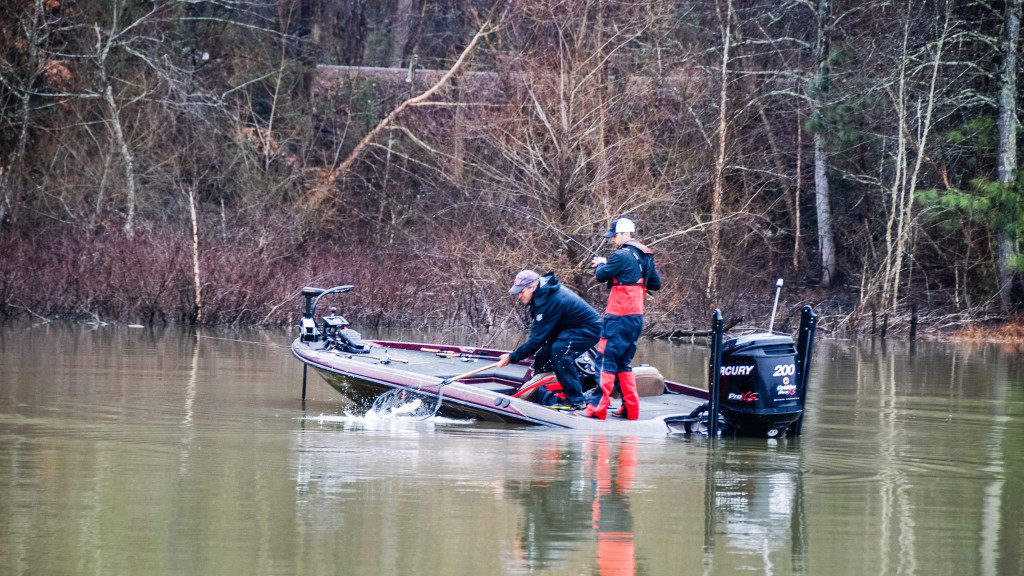 With the first day of competition in the books for the Toyota Series Eastern Division tournament on Lake Hartwell, a strong mid-lake pattern seems to be the norm for all of the top 5 anglers and many others in the field.

In first, Marty Robinson targeted largemouths with some finesse tactics to haul in 21-1 of Lake Hartwell bass. You can read about his leading pattern here.

Here’s a closer look at how the rest of the top 5 caught them on day one of the Toyota Series Eastern Division opener.

In second after day one, Dustin Henson of Landrum, S.C., had a five-fish limit of 18-3. Although he exuded much confidence while onstage with Tournament Director Mark McWha during weigh-in, Henson says he felt he was lucky on Tuesday.

“They ain’t jumping in the boat. I only got seven or eight bites all day,” says Henson. “I caught some as shallow as 6 inches and some as deep as 50 feet.”

Henson describes his bait preference of the day as simply a jig, choosing to remain tight-lipped about what got him into second place, which produced both shallow and deep for him. He says his biggest fish of the day came after the sun popped out near the end of competition. 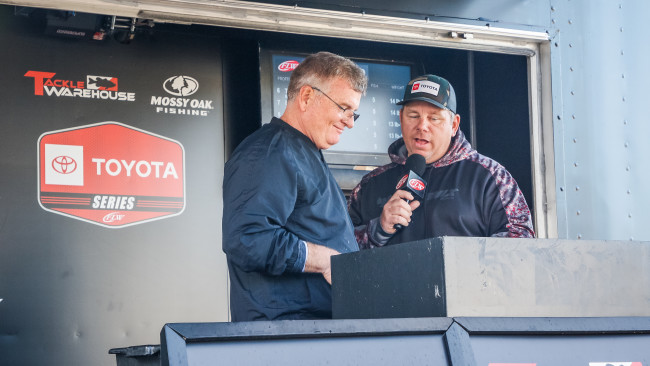 Derrick Bridges from Greenville, S.C., is no stranger to Lake Hartwell, which he has considered his home lake for nearly 30 years. Fishing the spots that have historically produced for him in the past (in the upper to middle sections of the lake) came through for him today. Although Bridges admits to having had a terrible practice run, he still managed 17-6 to grab possession of third.

“It’s coming around,” says Bridges. “It’s not rocket science catching these fish, and the typical 8- to 15-foot water depths worked for me today.”

Bridges’ limit included two spotted bass and two largemouth bass, and he describes them as nearly impossible to target one over the other on Hartwell. His choice of baits were jigs and swimbaits. 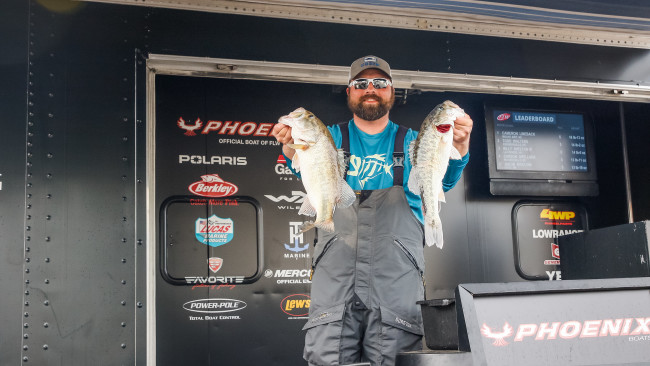 Cameron Lineback from Mount. Airy, N.C., finished the day with a five-fish limit of 16-13. In contrast to the other top finishers, Lineback says he has only around 20 days of experience fishing Hartwell in his lifetime, though he’s seen it enough to know what normal water levels and color are like.

“I’ve never seen this lake so muddy and high,” says Lineback. “I think that leveled the playing field for me.”

Lineback says he caught his fish on several different things but preferred not to go into detail so early in the tournament. He did say he fished all over the lake today, putting in an overall long run and covering a lot of water. 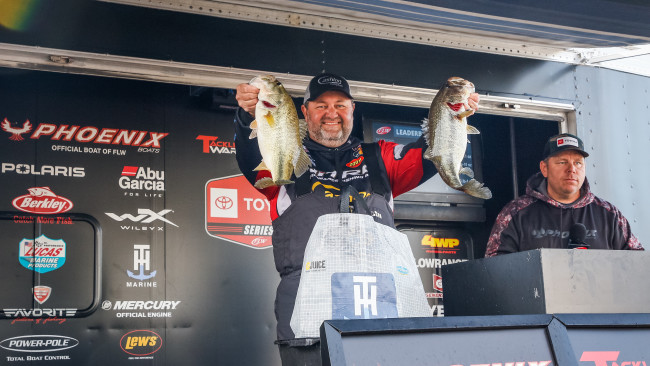 David Williams of Maiden, N.C., rounded out the top 5 finishers with his 15-pound, 3-ounce bag. He says with total sincerity that he could not figure out a discernable pattern on day one. What worked for him was just running down the bank and covering a lot of water.

“I think I caught one off of wood and one off some rocks and one around a dock,” says Williams. “You’ve just got to catch them where you can.”

Using bright colors of either white or chartreuse, a Z-Man ChatterBait and a variety of spinnerbaits did most of the damage for Williams.

Like most of the field, he jumped around mid-lake and said he’d love to see a change in the weather for competition tomorrow.

“I need some sunshine to tighten them up,” he adds. “That will put them closer to cover so they won’t be so scattered out like they were in the cloudy, rainy weather today.”