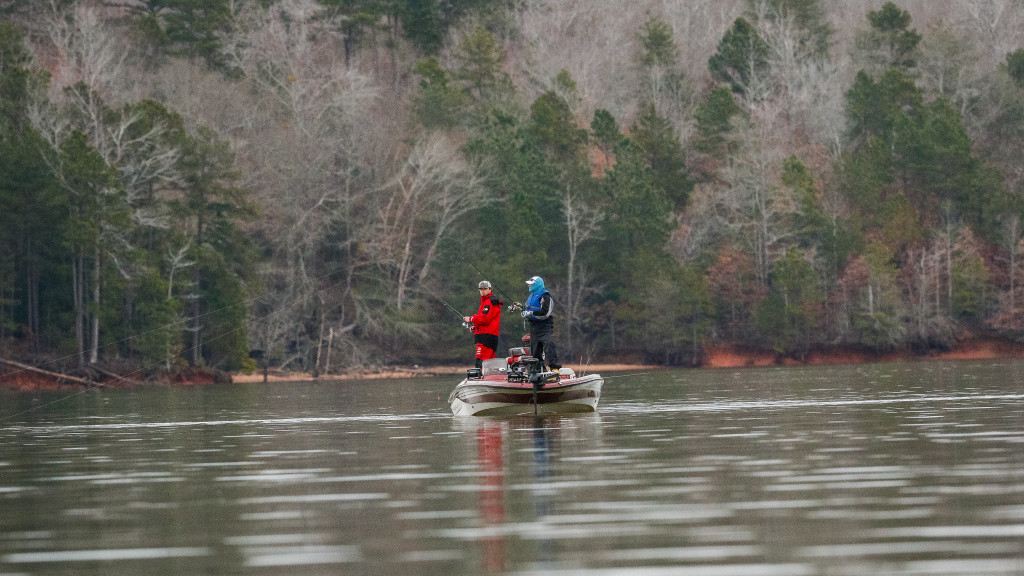 Early March on Lake Hartwell can be feast or famine. The bite often depends on weather patterns, as both largemouth and spotted bass are staging before the spawn. So far this year, over 47 inches of rain has fallen over the Hartwell basin and another 2 1/2 inches of rain fell during the Toyota Series Eastern Division opener.

MLF Bass Pro Tour pro Marty Robinson pulled off a wire-to-wire win, but the victory wasn’t easy. The final field of 10 contained a lot of local knowledge and experienced anglers who were ready to knock Robinson off should he falter.

Here’s a look at how the rest of the top 10 caught their fish and earned their paychecks. 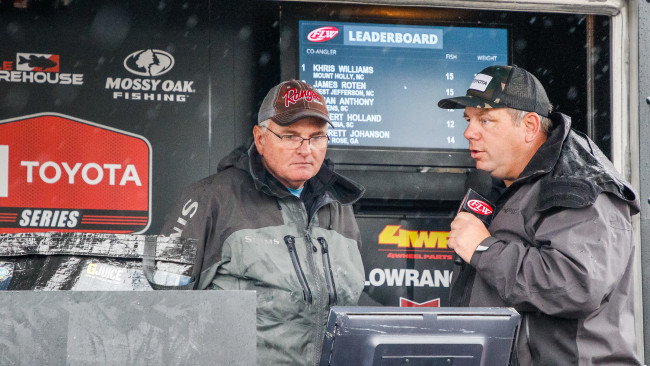 2. Bridges and his little brown jig

Veteran pro Derrick Bridges made the entire field uneasy throughout the three-day event because he was the only angler in the top 10 who was consistently catching good bags of fish in deeper water. While the rest of the field hoped for more rain or less rain or no rain depending on their patterns, Bridges and his little brown jig just went fishing every day.

“I’m out here every day enjoying myself,” says the Greenville, S.C., pro. “It would have been a lot different if the sun had come out. It would have changed the playing field and all of these guys in line would have better bags of fish.”

What makes Bridges so dangerous at Hartwell is that he’s fished it for 30 years. Experience and knowing historical fishing spots that consistently produced in the past and then methodically fishing those spots nearly earned him the win.

“I stayed about mid-lake on the Georgia side, and I stayed out deeper than what the other guys were fishing – but you can’t call it offshore fishing,” he adds. “I was fishing the mouth of short pockets. The best way to explain my areas were if you see a secondary point in a creek that looks like you should be throwing a floating worm up high on that point, I just turned and went out to deeper water in about 15 feet and threw my brown jig.”

Bridges credits Ranger Boats and his lifelong friend and fishing partner, David Whyte, at Augusta Marine for keeping him on the water for a chance to compete for the win. 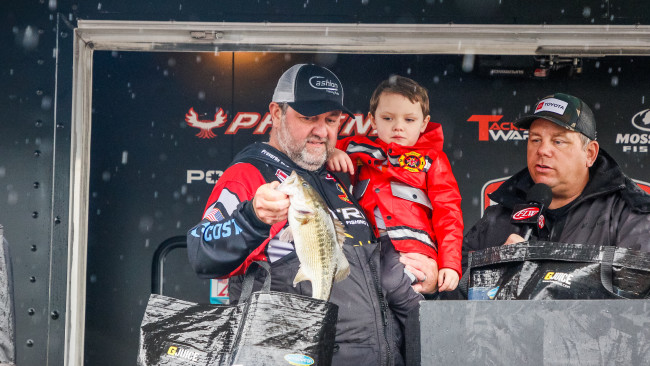 David Williams of Maiden, N.C., describes his fishing pattern as junk-fishing. He covered a lot of water during the three-day event, but it was more amps with the trolling motor than gas in his outboard.

“I guess I probably covered five miles a day on the trolling motor,” he says. “I picked a couple areas that looked good in practice, then each day I’d put the trolling motor down and go. I don’t think I caught two fish on the same piece of structure. I’d catch one on a rock, one on a stump, one on a point and one in front of a boat dock.”

Williams concentrated the majority of his efforts on the areas around the mouth of the Seneca and Tugaloo Rivers and pretty much stuck with the same bait throughout the tournament: a 1/2-ounce Queen Tackle bladed jig in white with a Zoom Salty Super Fluke (white) trailer.

Using his run-and-gun junk tactic, Williams grabbed the hot seat on the final day with his 18-8 bag and stayed there through much of the top 10 weigh-in until the next-to-last competitor, Derrick Bridges, knocked him off. 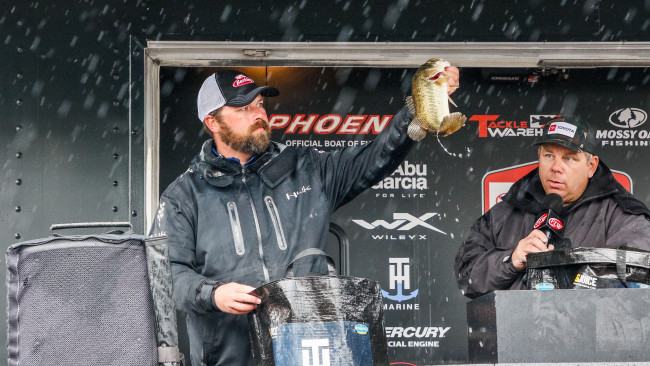 Cameron Lineback from Mount Airy, N.C., found fish moving up shallow and caught big numbers of fish on the first and last day in the rain, wind, and cold. What hurt him most was the brief pause in nasty weather that occurred on day two, which was warmer and more settled weather, although the skies never completely cleared up.

“I fished along the main channel and concentrated on channel swings while the fish were moving up into small pockets,” he says. “I caught fish in 0 to 6 feet of water most of the time. I used a Strike King [KVD] 1.5 orange belly craw crankbait and threw it almost up on the bank, then I’d rip it and stop it. If it hit a stump or a rock on that rip, more times than not I caught a fish, whereas if you bumped the bottom four to five times, they’d let it go by.”

On day two, he did scratch out a limit, but it was hard fought, and he had to cover a lot more water to do it, flipping a Texas-rigged Zoom Ultra Vibe Speed Craw in black to get there. 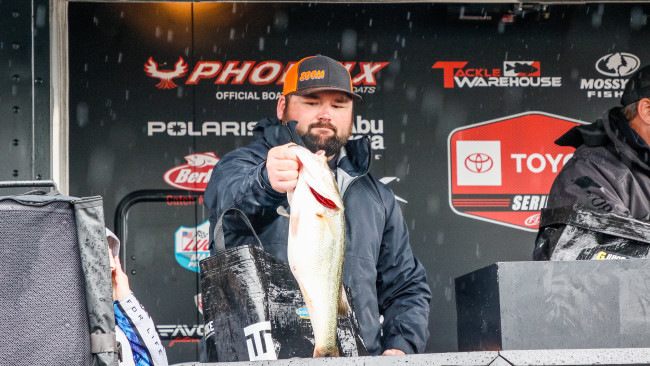 5. Rampey cuts the field in half

Jayme Rampey, from Liberty, S.C., bounced a crankbait and a shaky head along the bottom to catch his limits all three days. The pro described his pattern as fishing rock, from deep rock, to shallow rock and especially wherever he could find indigenous rock imbedded in the red clay bottom.

“I would start in the mornings in the mouths of spawning pockets and fish shallow first thing,” he says. “Later in the day, I moved out to deeper areas that had rock and caught probably equal numbers of largemouth bass and spotted bass. I truthfully expected a better bite than what I saw in this tournament. I knew I could catch a lot of fish, but I really expected the sizes to be better.”

Rampey’s total fish counts got higher as the event progresses, while the skin on his hands got thinner. He estimates he caught 10 fish on the first day, 20 fish on the second day and then doubled that to 40 on the final day. That number helped him at weigh-in after many of the competitors struggled for various reasons, allowing him to jump from 12th place on the first day to 10th place on the second and then up to fifth to close it out.

The only drawback to catching so many fish on the final day?

“I had to cull through so many fish, my hands are bleeding,” Rampey joked after weighing in. 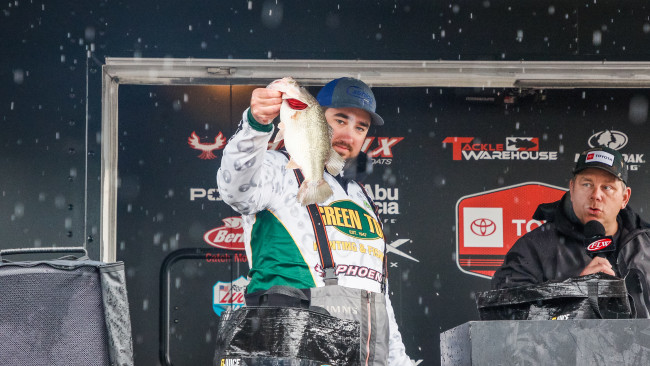 Fishing smarter as well as harder helped land Cody Pike from Powhatan, Va., in the sixth spot on Championship Thursday.

He may not have had as much experience on Hartwell as many of the other top-10 finishers, but Pike does have Google Earth on his computer, and he used it to figure out that he wanted to fish a lot of rock during the event.

“I sat on the living room couch at home and pulled Hartwell up on Google Earth,” he explains. “The time frame was during a low water period and you can see all the rock banks and rock points clear as day from space.”

After marking some good-looking areas on a map, he started bumping a SPRO Mike McClelland Rk Crawler 55 in red bug along the bottom in 12 to 15 feet of water. He caught so many 1 1/2-pound bass that he moved to some muddy water he found in 6 & 20 creek and fished in 4- to 6-foot depths and caught better quality bass.

Unlike most of the top 10 anglers in the field, who found spotted bass and largemouth bass mixed together anywhere they fished on Hartwell, Pike caught nearly all spots when fishing deep, clear water and nearly all largemouth when fishing shallow, dingy water. 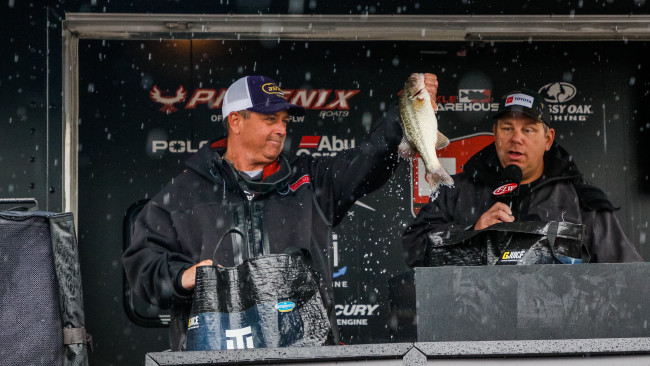 Rob Digh from Denver, N.C., should have brought some camping gear with him to Hartwell. It would have saved him a lot of time to just pitch a tent, as he spent 95 percent of his time on the water fishing the Tugaloo River.

“I think I hit every pocket there was in the Tugaloo River,” he explains. “The keys were they had to have a lot of rock on the bottom and the surrounding bank had to be steeper than the rest of the area.

“I caught a lot of my better bass on the points. These are pretty typical Lake Hartwell red clay banks with big chunks of rock everywhere.”

Digh says he isn’t sure if his bass were targeting crawfish or baitfish. He never really marked much bait on his graph, but the last fish he caught before the final weigh-in spit up a bunch of shad in the livewell. 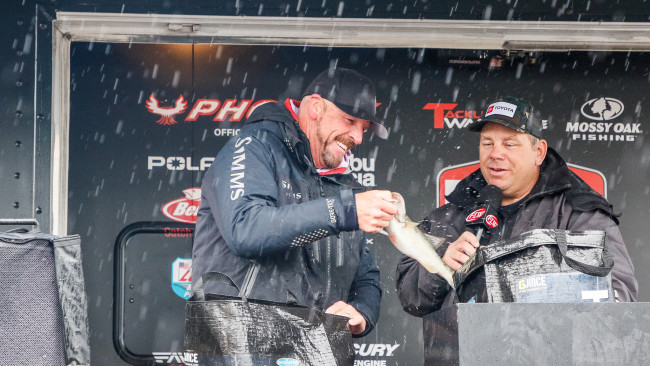 8. Guthke’s pattern runs out of steam

Things might have turned out different for Townville, S.C., angler Thomas Guthke if the pattern that propelled him into the top 10 on had simply held out one more day.

Guthke was running riprap banks about midway back into the creeks on the lower end of the lake in the morning and fishing those with a Carolina rig. That’s how he put his limit in the boat, and then he’d move to rocky points and roadbeds in 12 feet of water to work on upgrades.

“I knew they were eating crawfish because at the end of each day, I’d look in the livewell and see spit-up crawfish in the bottom,” he says.

Guthke’s better fish came on old roadbeds or one of the old private boat ramps that lead out pretty far into the lake.

On day three, his riprap-and-roadbed pattern ran out of steam. He managed to put together an 8-6 limit to take eighth place but had to break out a drop-shot to do it. 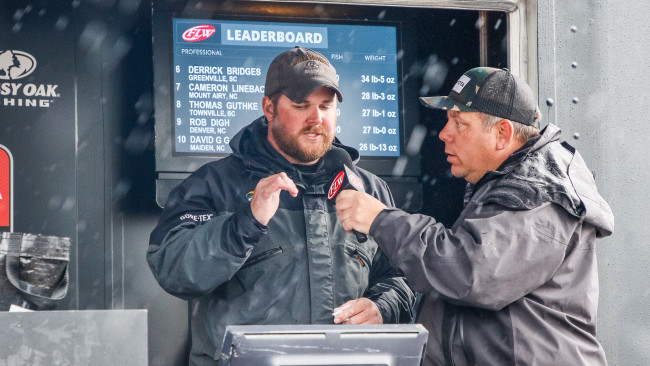 Trent Palmer isn’t a ditch-digger by trade, but he certainly earned some money on Lake Hartwell dragging them. His most productive pattern was to find small ditches that fed into spawning flats and drag his baits into schools of fish that were holding there.

top two baits for dragging ditches were a 1/2-ounce handmade underspin in white paired with a 3 1/2-inch Zoom Swimmer Paddle Tail, also in white, and a 1/8-ounce Ned Rig with a Roboworm Ned worm in green pumpkin.

“I’d get on a ditch and throw the bait across it and just drag it through schools of bass,” he says. “I caught tons of 2- to 2 1/2-pound bass every day and just weeded them out until I found the better fish. I sat on one ditch for half of the first day and caught almost 13 pounds of fish out of it.”

Palmer says his key ditch turned sour on day three when a school of striped bass moved in and either shut the bass down or ran them off. Fortunately, he had six or seven such areas on the lower end of the lake that also produced for him. 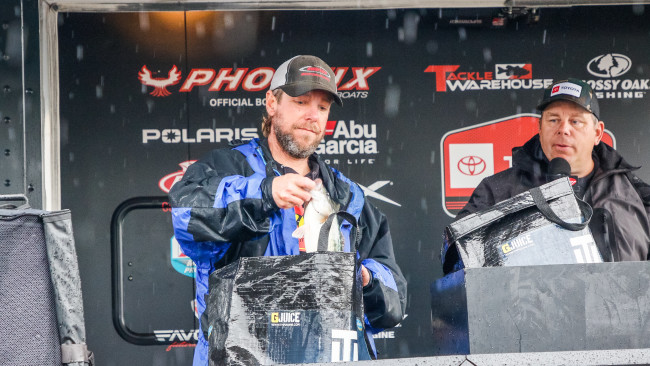 10. Partain keys in on baitfish in Georgia

Kerry Partain from Elberton, Ga., spent all week fishing Lake Hartwell in his home state. He moved up and down the Georgia side of the fishery all three days, working both small drainage ditches and clay points in 10 to 20 feet of water.

Partain says most of his fish were caught on a 3/8-ounce Blade Runner underspin in white paired with a Zoom Salty Super Fluke (white). He stuck with this combo because he found baitfish in almost every area he was fishing.