Honnerlaw in Front at Big O 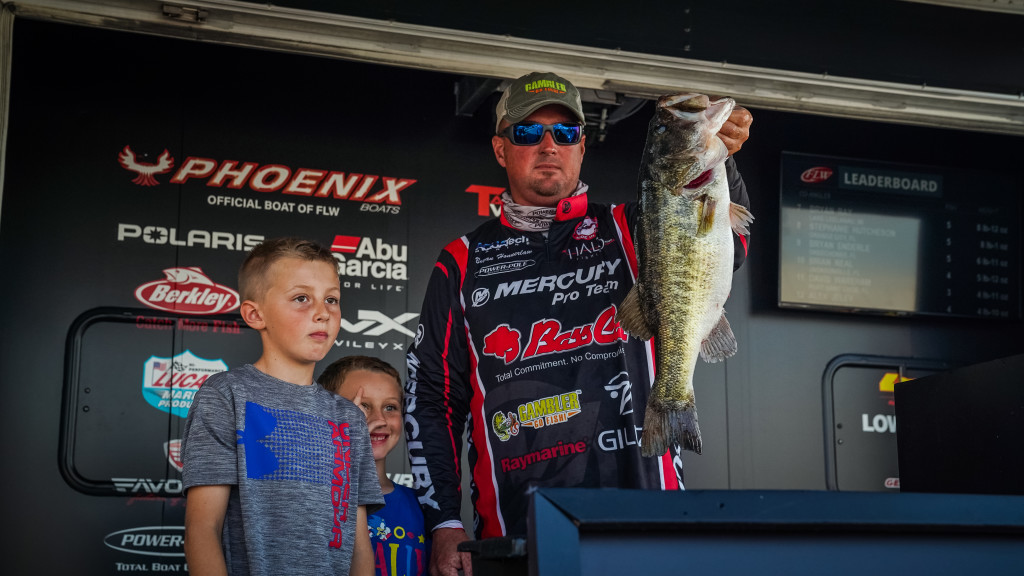 Day one of the Toyota Series Southern Division event on Okeechobee was great from a fish-catching standpoint, but somewhat lacking from a big fish perspective. In the lead, Bryan Honnerlaw of Moore Haven, Fla., put 19 pounds, 14 ounces on the scale. Behind him, three other pros also managed 19 pounds or better, and there is an absolute stack of anglers in the mid-teen range.

A longtime competitor in a variety of FLW events and a guide on Okeechobee, Honnerlaw’s one FLW win came on the big lake in 2017.

Like a lot of the pros who did well, Honnerlaw mixed it up a bit on day one.

“This afternoon I went to some postspawn fish that were on shad; I only caught two today, they didn’t cooperate as well as they can. They kinda moved, and I think I relocated them late this afternoon. We’ll see tomorrow.”

Catching perhaps 20 keepers on the day, Honnerlaw’s small fish was a 2-11 that he couldn’t quite cull to get across the 20-pound mark. 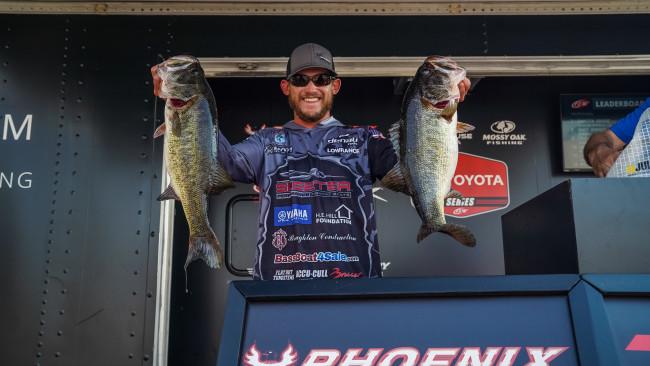 A Bassmaster Elite Series pro and Okeechobee guide, Monti really put his knowledge of the pond to use today.

“I started out kinda in a community hole, and I caught a limit pretty quick and watched a lot of big fish get caught, but I didn’t catch any there,” says Monti. “So, I just started running around to areas that I think they’re pulling up in. I fished two different places and caught one 3-pounder and one that didn’t help, and I just kinda worked my way north and ended up at Kings Bar.”

Once at Kings Bar, things started to come together for Monti.

“I caught most of those fish at a place I haven’t fished in two or three years. The water dropped, in practice there were a lot of fishing moving up, but the water dropped and they moved out. I scrambled, I caught one on a jig, a few on a ChatterBait, some on a swim jig, some on a Senko.”

Monto says that he spent a lot of time in unproductive water today. So, his plan is to start in his community hole again tomorrow and then see where the day takes him. Monti is due to really show out in a big event on Okeechobee, and this week just might be the one. 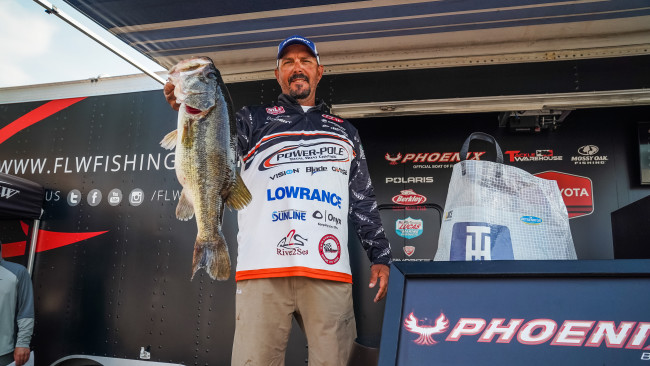 “I’m fishing spawners, it was one of those deals where you catch what you can on day one, because they’re not going to be there tomorrow,” says Davis. “Once I caught them early, I left and went fishing for tomorrow, and I think I found some more. They’re not committed to the bed yet, so maybe by tomorrow if they lock on I should do pretty good. I hate saying that, but I know they’re there.”

Though Davis says he actually sight-fished a little today, the bulk of his damage was done at long range.

“I’m throwing a search bait, and they’re not committing to a search bait really good, but whenever they come up on it I’ll pitch something back to them and catch them,” says Davis. “That’s how I caught the two big ones today – I knew they were there and just made long casts to them. The fish are trying to spawn, they really are. I think it’s the last wave, but hopefully tomorrow it holds up.” 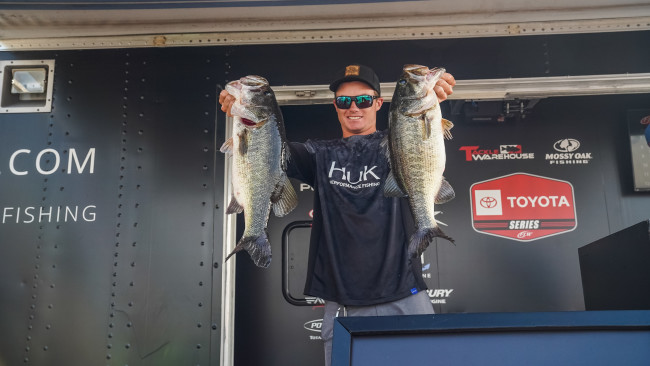 Fishing only his second Toyota Series event ever, Bradley MacQueen rode a pair of big bites into the top five on day one.

“I caught the one big one first, and at 10 o’clock I had three fish,” says MacQueen. “I went running all over the place and stumbled on that other 7-pounder and then filled out a limit. I’m just flipping outside. In the afternoon I guess it turned on.”

Catching just seven keepers all day, MacQueen hopes he can be a little more productive on day two.

“I’m just gonna go fishing tomorrow,” he says. “I marked a lot of water off today that I don’t need to run tomorrow. So, we’re just going to sit down and have fun.” 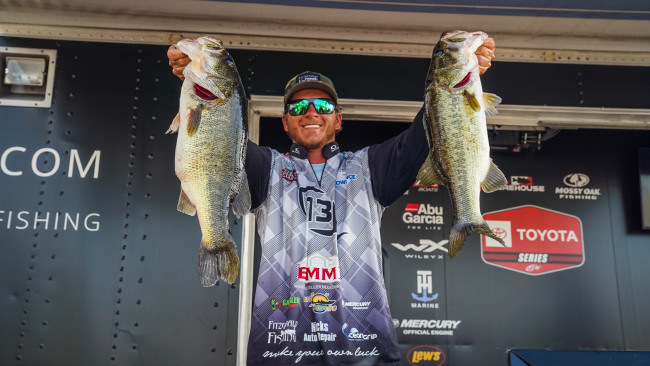 An erstwhile Okeechobee hammer, Jessie Mizell probably had the most fun of anyone on day one.

“I found some fish in practice in a little spawning bay, and they pulled up there the other evening,” says Mizell. “I went there first thing this morning, and they weren’t in there yet, they were staging on the outside of the Kissimmee grass line. I just kept going back and forth in front of that bay. I probably caught 30 bass today on a topwater frog.”

Though he tried flipping and some other stuff, the frog was the ticket.

“I caught some on the outside edge, and some in the trails,” says Mizell. “I would zigzag in and out. Most of them came at the mouths of the trails or at the tip of the points. It was a blast. Hopefully it pans out tomorrow.” 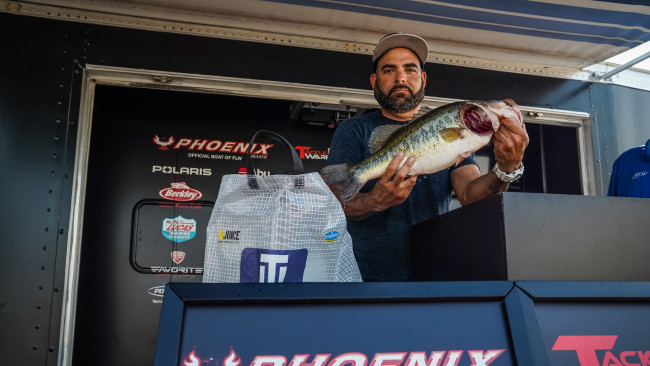 Gonzalez leads co-anglers on day one

Roger Gonzalez hasn’t fished an FLW event in about 10 years, but his comeback got off to an impressive start on day one. Weighing 17-6 to take the lead on the co-angler side, Gonzalez is feeling comfortable.

Fishing behind Eddie Carper on day one, he caught most of his weight in a pretty popular area.

“I’m fishing a worm slow through the reeds, just letting it soak in those holes,” says Gonzalez. “That’s how I’m getting the bites. There’s a lot of people in there, but they’re doing the wrong thing.”

If confidence is worth anything, Gonzalez might well catch them again tomorrow. Because based on day one, he’s in his comfort zone on the Big O.