How the best dealt with unusual early-season offshore fishing 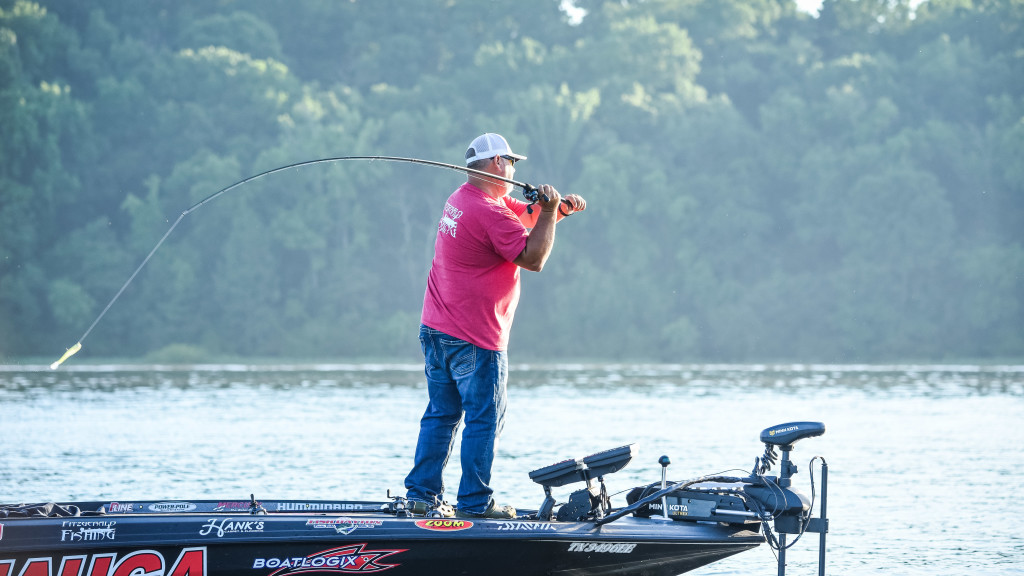 Pickwick Lake greeted Toyota Series anglers with high, stained water and stronger than normal current last week. While the last week of May usually means fishing to depths of 25 feet on Pickwick, some anglers felt Pickwick’s bass were a little behind in their summer migration to the deep ledges. Jacob Wheeler won the Central Division event fishing deeper main river ledges, but a lot of the top 10 utilized shad spawns, shallower ledges and river bars in the 7- to 10-foot zone for their catches. Here is a closer look at how the top 10 got it done last week. 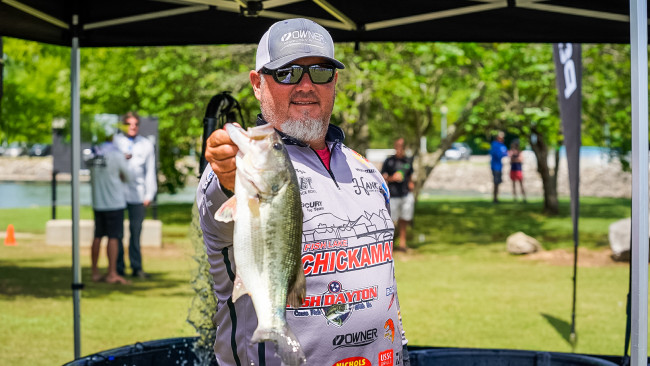 When it comes to imitating big threadfin or jumbo gizzard shad with a lure, Buddy Gross is one of the best.

Gross brought in the biggest catch of the week on day one: 24 pounds, 1 ounce when he hit the peak of a shad spawn on a 6- to 8- foot grass edge. That got him out of the gates with a nice lead. From there, Gross caught 13-pound bags the next two days and fell to second. 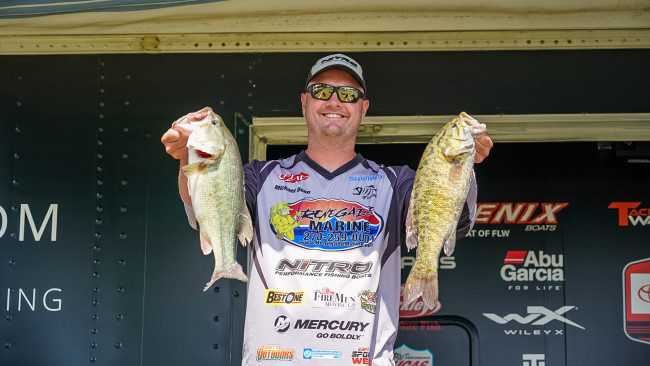 Due to the heavy current trucking through Pickwick, Bean had to resort to a Carolina rig with a 1-1/2 ounce weight to keep it on the bottom. He tipped the rig with a Lake Fork Ring Fry Worm in green pumpkin. He also dragged a D&L Tackle Football jig teamed with a Strike King Rage Craw.

“I was stroking the jig,” Bean says. “I’d hop it hard and then let fall all the way back to the bottom along the ledge and hop it again.” 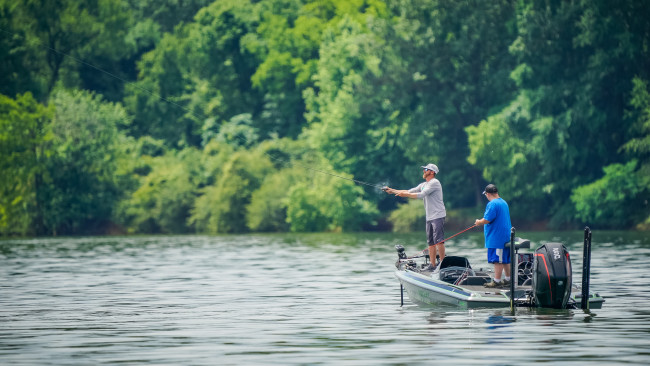 As water temperatures climbed past the mid 70’s, the shad spawn was winding down on Pickwick. However, Michael Brewer of Lawrenceburg, Tenn., milked it for all it was worth. He used a Castaic 5-inch Jerky J swimbait (green shad) paired with a Davis Baits Shaky Fish to imitate Pickwick’s big gizzard shad on his shad spawn areas. He alternated between two size heads: a ½-ounce and a ¾-ounce.

“I found two back channels lined with grass that were still holding some big gizzard shad,” Brewer says. “I was fishing the edges of the channels, which dropped from about 4 to 8 feet. If it was a shallower edge with light current, I would use the ½-ounce model. If it was deeper or had a lot of heavy current on it, I went to the ¾-ounce. Matching the right weight lure with the depth and current to get the lure down where it needed to be was key.” 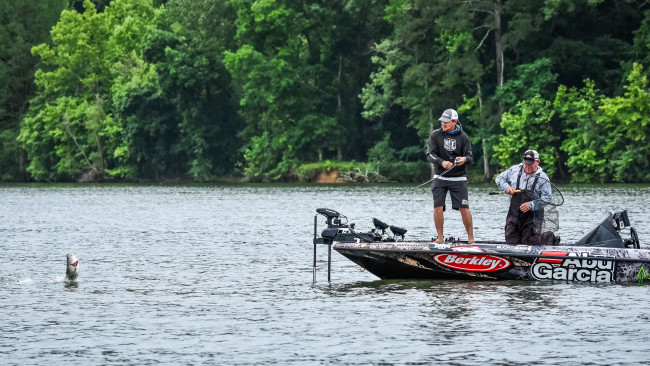 5. Atkins goes against the grain

Pickwick Lake is Justin Atkin’s home lake, so he is familiar with the deep-school game there. But with so many anglers scanning the well-known ledges with their electronics, he wanted to see if he could compete by fishing up shallower, away from the crowds.

Atkins made his plan work well the first day, targeting grass, stumps and shell along a shallow bar in about 6 to 8 feet of water for 21 pounds, 14 ounces, which put him in second place after day one. But the shallow bar only coughed up a couple of keepers each day after that and Atkins had to resort to running down the lake and fishing deep places to the tune of about 13 pounds per day.

For the shallower bars he threw a 10-inch Berkley PowerBait Power Worm (blue fleck) with a 3/8-ounce weight. When probing deeper ledges, he opted for a Berkley Dredger 25.5 crankbait (splatter back in color). 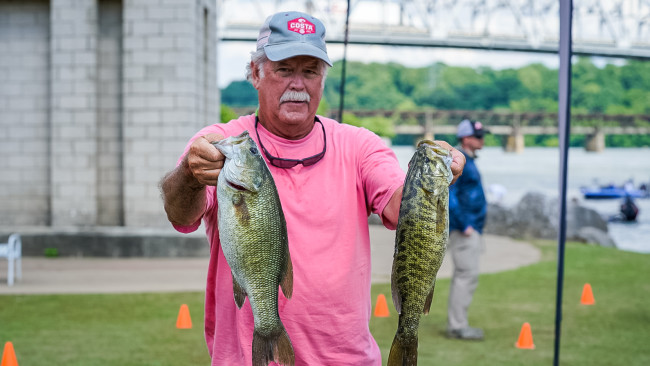 Of Marshall Deakins’ 15 fish he weighed throughout the week at Pickwick, more than half of them were smallmouth.

For most of the event, Deakins stayed up in the more riverine portion of Pickwick where the current was heaviest. He had two primary spots in that section: one was a largemouth spot on a grassy river bar and the other was a 17-foot eddy hole along the river that held big smallmouth. 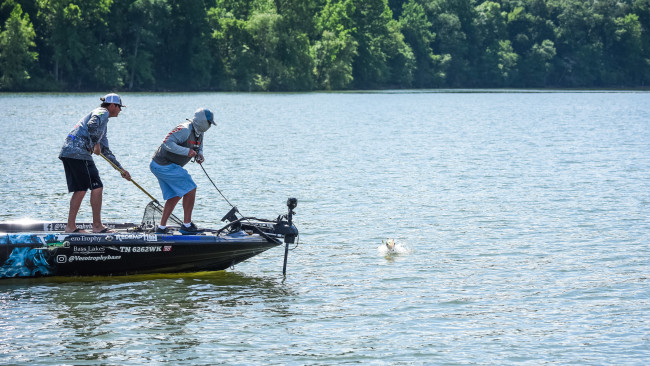 Thanks to an early boat number on day one, Brent Anderson got first crack at a Pickwick Lake community hole and he made the best of it, sacking up 20 pounds, 8 ounces.

From there he had to scratch and scrape through the crowds the next two days to survive. The primary player in his ledge fishing line up was a unique five-bladed spinnerbait called the True Bass BA Spinner Multi-Blade Spinnerbait (nicknamed The Frankie Five Fingers). The model he used was 1 1/4-ounce version tipped with a large curl-tail trailer.

“Having something different in these big community ledge fishing tournaments is a big deal,” Anderson says. “It may not really mean that much to the fish, but in your head is where it counts. The Frankie Five Fingers has five blades on five different harnesses, like a mini Alabama rig, which gives a little different look. It’s a big bait and when a big bass takes a shot at it, it’s such a violent strike, it’s awesome.” 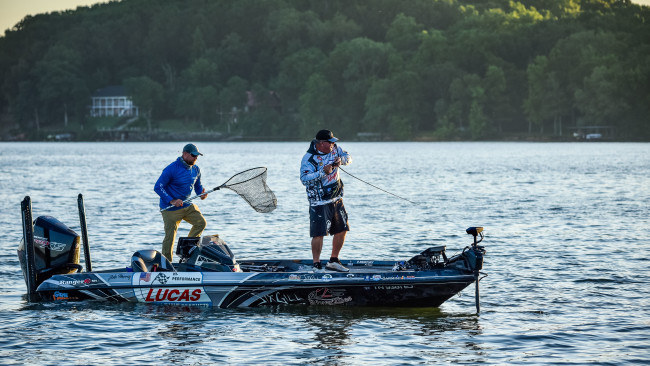 After day two, John Murray looked to be the man to beat at Pickwick. Murray took the day-two lead of the event with a 22-pound, 10-ounce limit.

Murray’s success came off shallower main river channel bars in the 7- to 10-foot range. Some of the bars featured shell bars and small patches of grass on top. He also believes some shad were still spawning on the bars. He used his forward-looking sonar to scan across the tops of the bars and “see” big blooms of shad activity on his screen.

“If I saw that shad activity on my screen and casted to it, I could get a bite,” he says. “I saw a lot of that activity the first two days, but on the last day it disappeared – I think it was over.”

Murray dragged the shallower ledges with an 8-inch Gene Larew Tattletail worm rigged on an 11/16-ounce Biffle Hardhead as well as a ¾-ounce BOOYAH football jig teamed with a double-tail trailer. 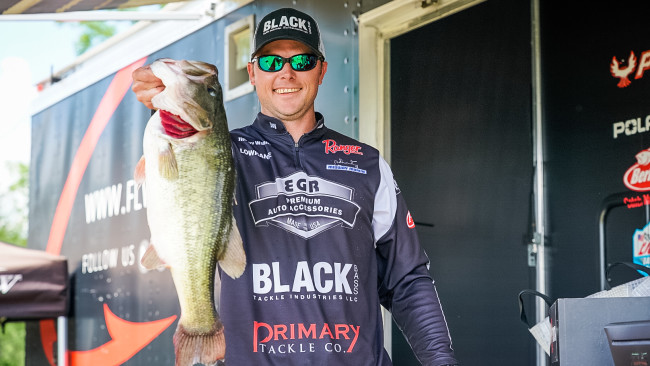 Jimmy Washam opted to fish shallower on Pickwick than he normally would for one reason.

“I think the fish, especially the bigger fish, are lagging behind right now,” he says. “They’re not all the way out on that deep stuff on the river like they should be. I think they’re still holding back in some of the creeks because that current in the river is still running pretty hard.”

For that reason, Washam chose to fish 14-foot depths, mostly in creeks where he caught an 8-pounder on day two that anchored his 21-2 limit. That fish came on a Black Bass Tackle Industries ¾-ounce Crawler Jig teamed with a Strike King Rage Lobster. In addition, he also used a 5.8-inch Keitech Swing Impact FAT swimbait on a ¾-ounce swimbait head and a Strike King 5XD. 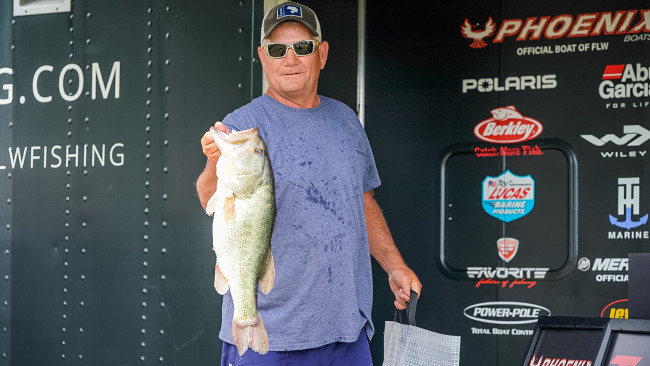 While others ran multiple spots throwing multiple lures, Ricky Robinson kept his Pickwick plan simple: fish one spot with two lures all day. His best day was day-two when he weighed in 21 pounds, including a 7-1/2 pound brute.

Robinson’s single spot was a gravel-lined hump near the dam. The hump topped out in 17 feet and featured several large current breaks where he slow-rolled big swimbaits. He haunted the hump with two different versions of a Driftwood Custom Baits 5-inch swimbait: one on a ½-ounce Berkley Fusion19 swimbait head and the other on an MGC Custom Tackle ¾-ounce jig.

With the final day coinciding with other local tournaments, Robinson lost his best spot to several local boats.