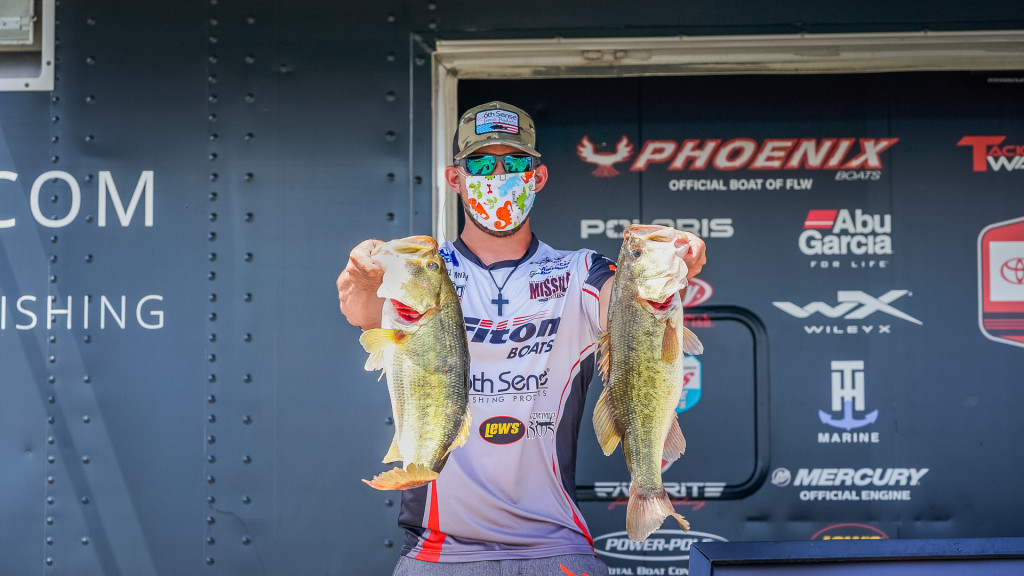 It’s a 90-minute drive from Michael Smith’s Andalusia, Ala., home to Lakepoint Resort State Park where the Toyota Series Southeastern Division kicked off its season today on Lake Eufaula. That’s just close enough, says Smith, that he fishes here more than anywhere else. His understanding of how Eufaula’s bass transition from the bank to postspawn ares to the main lake really showed today while Smith put together an impressive 25-pound, 7-ounce limit to gain the day-one tournament lead.

“I actually won a BFL here a few years ago and won a bunch of other little bit smaller events than this, so I’ve had a lot of success out here,” he says. “This isn’t really my favorite time of year, so I put in a lot of work before this tournament because I really knew I needed to. A lot of those places I found really paid off today.”

Smith says the bass in Eufaula are doing a “little bit of all of it,” meaning they’re still on the bank, transitioning to postspawn areas, setting up on summer spots, and now returning to the bank to capitalize on a mayfly hatch and spawning bluegills.

He spent part of his morning trying to find a big bite up shallow before switching gears and moving offshore. Once he made the move, Smith pounded out his 25-and-change limit by noon and then went back to the bank to “mess around” and see if he could luck into a giant. He never did.

“You couldn’t catch anything over 2 pounds [up shallow],” he says. “I kind of figured that, but there were a couple places where I thought I could get lucky and maybe catch a big one, but I didn’t.

“I don’t think I’ll fish shallow any tomorrow, but I think it was worth giving it a shot.”

Of the offshore bite, he says bass are in the “in between” range in 8 to 15 feet as well as on true river-channel ledges.

“I kind of tasted all of it today, but I’m kind of in more that mid-depth range,” Smith adds. “I did catch a few out deeper, but I’m in the mid-depth crowd catching them that are just getting out there. They seem to be the ones that are willing to bite. They just got off the bank, just got done spawning, and they’re feeding up to recuperate.”

With new fish coming to him, Smith is cautiously optimistic about his chances at a repeat performance tomorrow.

“I had about 30 places that I caught one over 4 pounds in practice, and I only had to hit about half of those today to catch what I had, and really had almost quit,” he says. “I had 22 at, like, 9 o’clock and kind of was just messing around from there. And from 9 to 12 I caught a 4 1/2 and a 5. That kicked me up to 25. So after that I was for sure done. I left a lot of stuff out there, [but don’t know] whether people hit it today. But it got to the point where I was culling almost 4-pounders, and I didn’t feel like that was a good idea for the rest of the event. I definitely left some stuff, so we’ll see if it works out.” 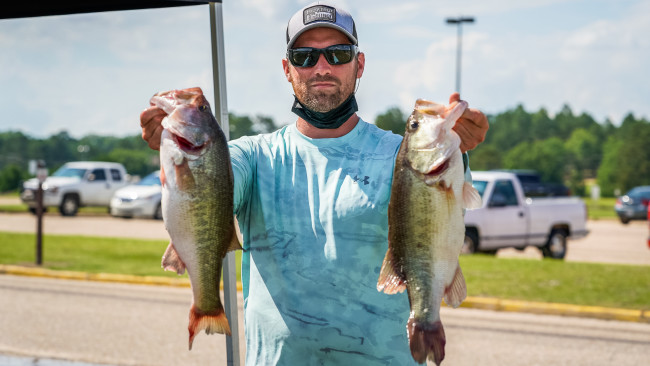 Crestview, Fla., co-angler Joseph Chilcott had himself a big day today fishing with pro Matt Baty. Chilcott cracked 19 pounds, 2 ounces to open the event in first place with a 1-pound cushion over Cal Culpepper, setting himself up for a shot at a brand-new Phoenix bass boat.

"We started the day off shallow and weren't really getting bit, so we jumped around and hit some ledges and brush," Chilcott says. "We pretty much just went spot to spot and never really stayed anywhere too long. For me, everything just worked out perfect. I didn't lose any fish. Every fish I set the hook on came in the boat, and I just lucked up and got into some good fish. Matt's an excellent guide, obviously. It was a really good day for me."