The morning bite was red hot today in Alabama 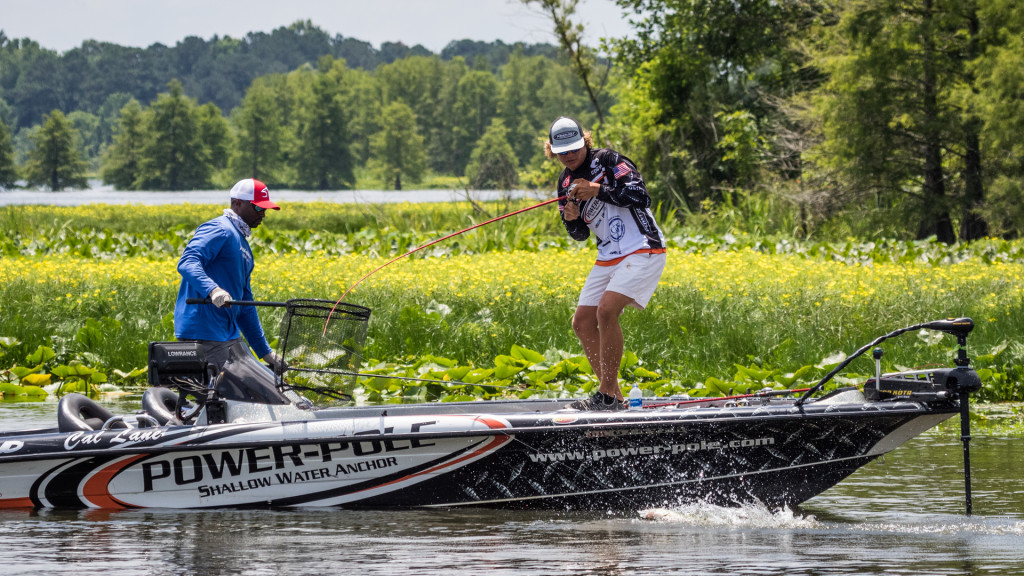 Fishing is good, but it’s not easy today at Lake Eufaula on the second day of the Toyota Series Southeastern Division event. Well, that’s only part of the story.

This morning, the bite was red hot for most of the offshore anglers. Many reported catching limits within the first 90 minutes. Then everything shut off. Like yesterday, this midday lull is a tough puzzle to crack. There’s no current. It’s hot, with very little wind, and only scattered clouds dot the sky. At times during late morning today, it felt like one of those summertime scorcher tournaments.

The good news (particularly for pros in the later flights) is that the bite should pick up toward the end of the day. Yesterday, several anglers caught flurries of fish in the last hour or so of legal fishing time. That’s likely to do with the uptick in power generation that’s been on the schedule starting around 1 o’clock each day.

Tournament leader Michael Smith had about 18 pounds when we saw him at 10 o’clock. He caught most of that early on moving baits and benefitted from a fish that’s close to 6 pounds. When we saw him, Smith was dragging a worm, just trying to coax a bite.

“A bad boat number hurt me,” he told us. “The first three or four places I wanted to hit had somebody sitting on it. That’s part of it. I’ll go back there after they start pulling water, and maybe nobody will be sitting on it.

“I think they’ve bit as good today. It’s just all about rotation. If you get in a bad rotation behind someone, they’re tougher to catch. Yesterday, I think I was the first one to fish for them, and I smoked them.”

Second-place pro Josh Stracner had a similar morning. He caught 15 to 16 pounds early. Then his fish shut off. Third-place pro Scott Montgomery’s report was nearly identical. Josh Bragg, in fifth, caught about 14 pounds early on, but we didn’t see him after that to get another update. Bryan New, who’s in seventh, had a small limit at about 9 a.m.

The most notable weight reported so far today was from Josh Butler. In 17th to start the day, Butler was already passed the 20-pound mark by about 8:30.

Cal Lane came into the day 3 pounds out of the cut. He had 16 pounds at noon and was hunting for one more big bite to try and get in the top 10. Lane figured he needed 20 pounds to get there. What’s interesting for Lane is that he’s spent the tournament fishing shallow around lily pads and other shoreline cover.

Depending how the afternoon bite goes, we might see things tighten up at the top of the leaderboard, with more of yesterday’s top performers coming in with bags in the teens instead of 20-plus. But there’s a lot of time left to try and figure things out.