The ledge anglers dominated on Friday 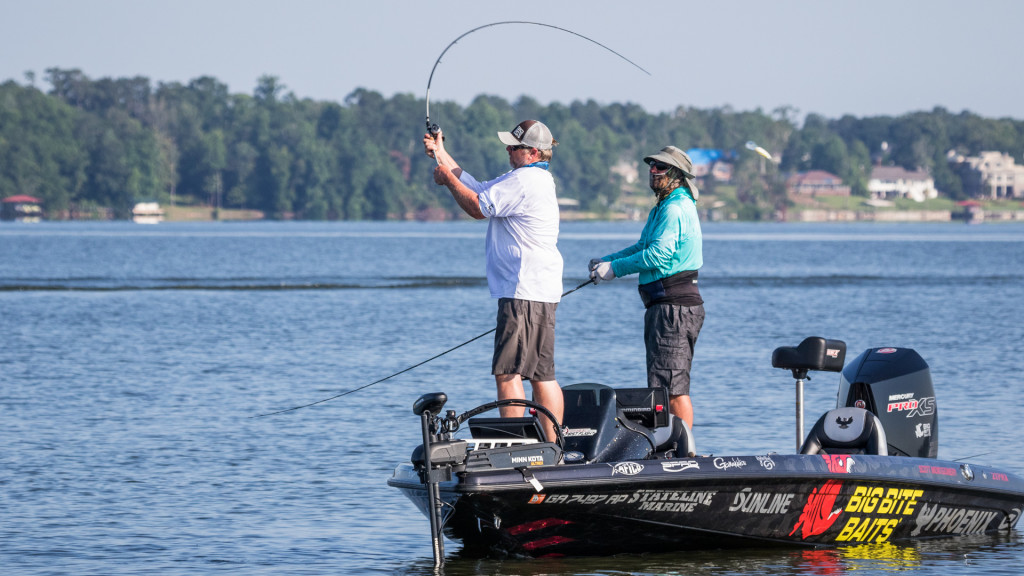 It’s not like we didn’t already know it, but today the top 10 anglers drove home the point: To win at Lake Eufaula right now, you have to be fishing offshore.

Among the ledge anglers this week is Michael Smith, who maintains his lead at the Toyota Series Southeastern Division event with a two-day total of 50 pounds. Here’s how the rest of the top performers made it to Saturday. 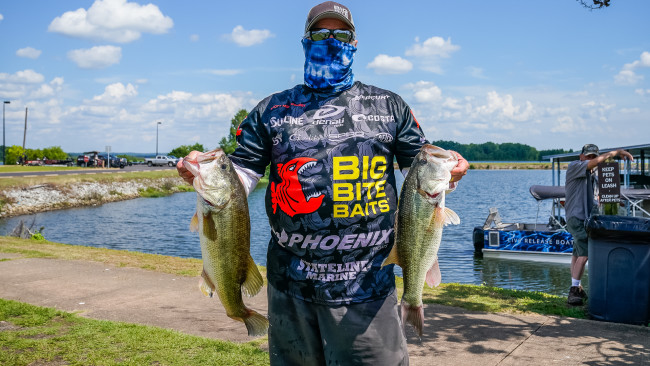 Scott Montgomery is the only pro besides Smith to catch at least 20 pounds per day. For Montgomery, catching 21-2 today was a lot tougher than catching 23-5 yesterday.

He had to resort to working an 8-inch Big Bite Baits Finesse Worm on a drop-shot, rather than the crankbait and swimbait that worked so well for him on Thursday.

“I think it got tougher because of the pressure, but also yesterday it was cloudy, so the fish stayed up on top of the bars yesterday a lot longer,” he says. “This morning, by the time we blasted off and I got down the lake, the fish had already pulled off the ledges and fell back down into the timber. These fish on this lake live in the timber on the river, and they’ll just pull up and feed every now and then and pull back. It’s a timing deal.”

Even though today was tougher, Montgomery believes the bite will get better tomorrow. He saw new fish show up in his schools today. Plus, some of the shallow-water anglers struggled. Both signs point to bass giving up on the mayfly hatch and moving back out to feed offshore. 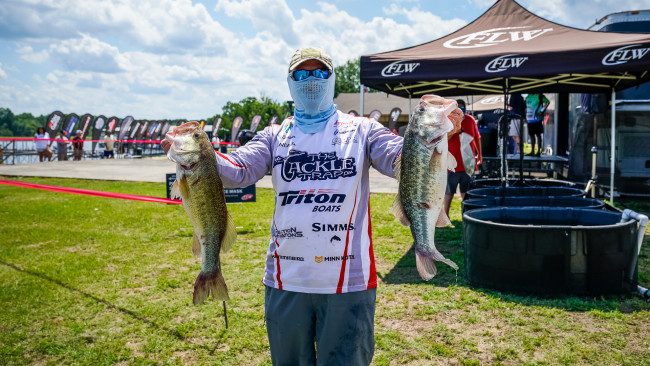 Josh Stracner’s 19-pound, 3-ounce limit today has him in third place, but he lost “one good one that would’ve really helped,” and that missed opportunity has him more than 7 pounds off the lead.

“I caught 15 pounds early, and I can’t really upgrade until after 12 o’clock,” he says. “I caught two or three 4-pounders after 1 o’clock today. It was the same way yesterday. I believe I left some biting.

“Today, I don’t think they ran any current. You just get that morning bite, and that late afternoon summertime bite. I should’ve capitalized this morning and blew that.”

Stracner is a favorite here and has plenty of juice out on the ledges. He says tomorrow he’ll hit every deep ledge he knows about. With fewer boats on the water, he should be able to get in a better rotation and have at least a shot at the win. 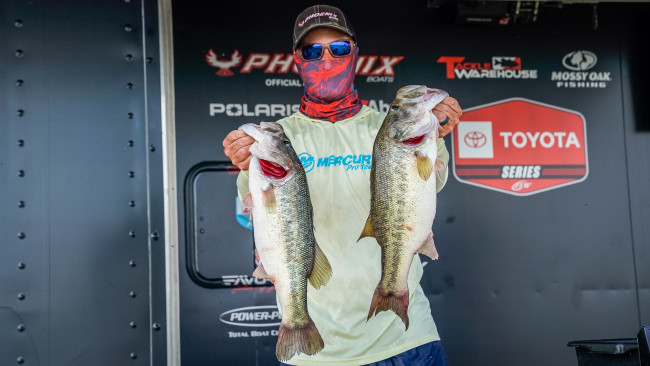 With a 24-pound limit – the second biggest stringer of the day and the third biggest of the tournament – Josh Butler moved into fourth place going into Saturday’s final round.

Butler got off to a racing start then benefitted from some key late upgrades to improve from about 20 pounds and get into the cut. Those late fish included a 4 1/4-pound bass caught with about 30 minutes to spare.

“Yesterday, I had a late boat number, so I wasn’t able to get on what I wanted to get on,” he says. “This morning, before 7 o’clock, I probably had 20 pounds, and it was fast and furious the first hour, every cast. It was fun.

“I’m fishing deep,” Butler adds. “If you want to compete and win out here, you’ve got to be out deep. Especially this time of year.”

Though he’s only fished here a couple times, Butler put in about 50 hours idling and graphing during practice. He located a milk run of schools and has since weeded them down to a collection of schools with better-quality fish, which he hopes will give him a chance to make a run at Smith. 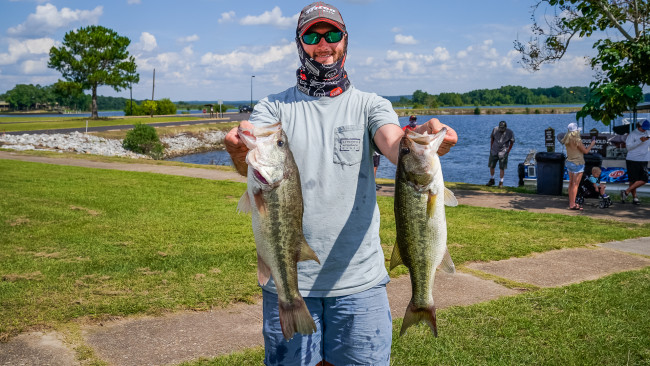 Shane Powell wasn’t able to back up his hefty 23-pound limit from Thursday, but a limit worth 17-12 was enough for him to stay in the top five.

“I fished deep and I fished shallow today, and I caught maybe a third as many fish as I caught yesterday,” Powell says. “And I actually had a little more room to fish. There were more people around me yesterday. I don’t know if they weren’t catching them yesterday and I was the only one that was, and it finally caught up with me or what. But my biggest fish I caught with 10 minutes left to go. It was a down-to-the-wire thing for me today.”

Powell is starting out offshore. Today, he found someone on his starting spot, and he never really got into a rhythm. The fish were not only fewer, but smaller all day.

“I think a lot of people being gone [a smaller field] is going to help tomorrow,” Powell adds. “I’m probably going to do the same thing I’ve been doing and just hope the cards play a little better.

“I’ve been trying to lay off the deep fish some just because it’s a three-day event, but I can see now I should’ve just been going for it. But, like I say, I just really wasn’t getting the bites today. Tomorrow it might be a dud completely, or I might hit the right place at the right time. Timing, that’s the biggest thing out here. That might be what my biggest problem was today.”