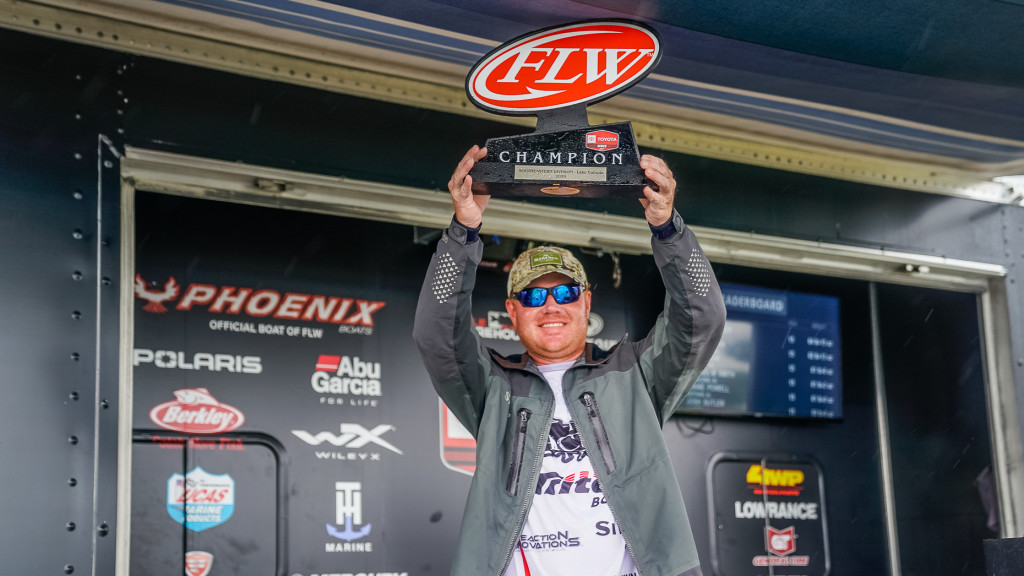 Smith, who led the tournament for two days with 50 pounds even, suffered a rash of lost fish today, and he never really got dialed in while conditions changed from sunny and calm to overcast and breezy as a front made its way through southern Alabama. Smith weighed in only 11-2 and fell to fourth.

This is Stracner’s fourth FLW win on Lake Eufaula, but midway through the day, it didn’t look like he was going to be able to pull off the come-from-behind victory.

He started the day doing what he’d done the previous two outings – fishing deep ledges in the mid-lake area. It just wasn’t happening. With 13 to 14 pounds in the livewell and a few hours left to fish, Stracner knew he needed to change it up. Eventually, he shifted to fishing shallow brush – in this case 12 to 15 feet deep – which quickly proved to be the right move.

“I did not even think about it [moving shallower] until about 12 o’clock, and the deep stuff wasn’t working,” he says. “So I went shallow and started catching a few. I caught enough that I just stayed with it the rest of the day. And right before this storm came through, I caught three good ones on back-to-back stops.”

In Stracner’s opinion, shifting away from ledges and to the brush worked so well because of the lack of fishing pressure the brush piles were getting (most of the top finishers were keyed on ledges) and the conditions.

“Just the dark clouds and real heavy overcast,” he says, describing the conditions that set up the brush bite. “It didn’t get hot and sunny, and they just wouldn’t pull up on those ledges.

Really, the wind got up a little bit. When the wind gets up, I feel like I can catch them really good in the brush.” 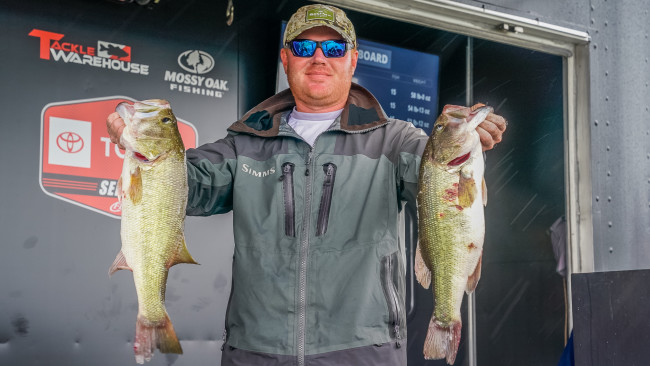 Coming into the tournament, Stracner predicted 22 pounds per day would win, and he was pretty much spot on. He opened the tournament strong by “getting on the right stuff at the right time” on the ledges. A good “rotation” was huge this week. Falling in line behind other pros on the best schools pretty much spelled disaster as the fish seemed programmed to only bite on the first few casts. The pressure literally pushed them off the ledges.

That first day, Stracner caught fish early, then settled into a midday lull. He caught some good ones in the afternoon, too, and was able to open the event in the top 10. The early-and-late pattern repeated itself on Friday. The exception was that Stracner got into a bad rotation and was fishing behind some other pros. It showed when his weight dropped by a few pounds. Today, Stracner made the right move, salvaged his day on the brush and added one more ledge fish toward the end of the day to fully seal it up.

Stracner’s ledge pattern, which got him to the top 10, was really nothing unusual for June at Eufaula.

“There are certain little places – hard spots, corners, turns in the ledges – and that’s just where they’ll sit,” he says. “It’s just putting a lot of time in on the lake and fishing everything I know.”

He used about a half-dozen baits this week to catch the winning fish. His main ledge baits were a Strike King 10XD and 6-inch Scottsboro Tackle Co. Swimbait on a Scottsboro Recon Head. Today, fishing brush, he caught some on a Reaction Innovations Fat Flirt Worm, which he says should be on the market soon (Click here to see the standard Flirt Worm.), and a Z-Man ChatterBait.

Clearly, if you watched the final weigh-in on FLW Live, you know that Stracner keeps his emotions in check. He’s reserved; the type that lets his fishing do his talking. Smith’s impressive start probably helped camoflauge what was lurking behind the two-day leader – a quiet local favorite with just enough tools and knowledge to break hearts on the final day. While Smith banged out two huge limits on Thursday and Friday, Stracner kept grinding in the shadows. Another win was the reward for his consistency.

“I can’t believe it,” Stracner says. “I never really thought I could’ve won it. I was just hoping to stay in second or third. Man, I just had to work real hard this week. There’s a lot of these guys, they catch them every day. You’ve got to be on the right stuff at the right time. Everything’s got to go right, and it’s just my day. That’s really all I can say. I just feel very fortunate right now.”