Ohio angler is rocking again on the big pond 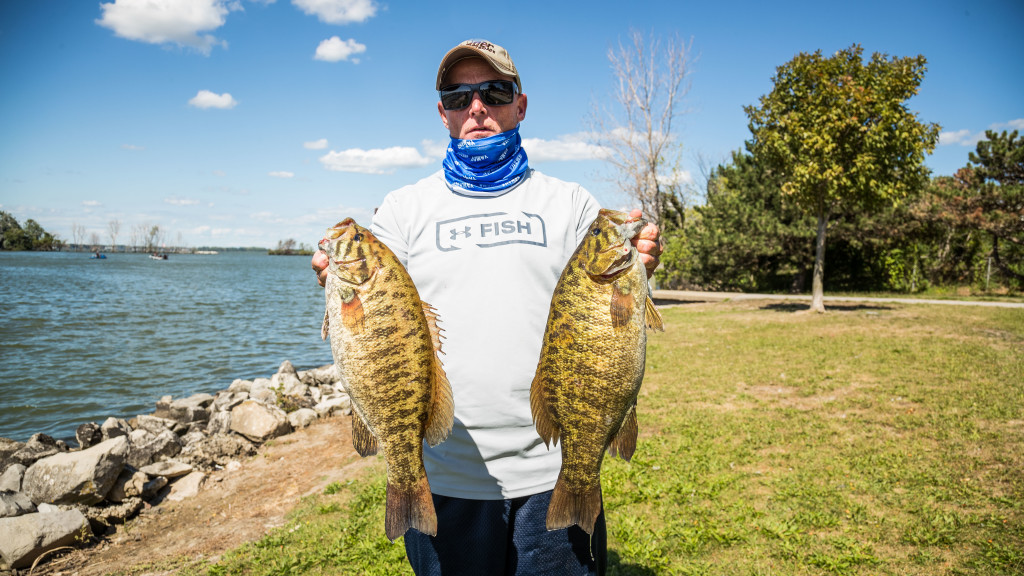 Due to big winds and waves, day one of the Toyota Series Northern Division event on Lake Erie was somewhat hampered. Still, the fishing was pretty good, and Dick Parker of Lorain, Ohio, sacked up 21 pounds, 6 ounces to take the lead.

Like he did in the first Northern Division event of the season, Parker found success by running east.

“I ran east, different spot, but almost down to Vermilion,” says Parker.  “I was going to do a milk run, but I had my limit early and it was pretty choppy.

“I don’t know what the wind is going to do yet, and these fish always make me nervous,” says Parker of his prospects going forward. “The fish are there, but they might not decide to bite, and I don’t know if I’ll be able to do my milk run if it’s too rough.”

Fishing in about 18 or 19 feet, Parker plied a drop-shot and says he caught about 10 keepers on the day. 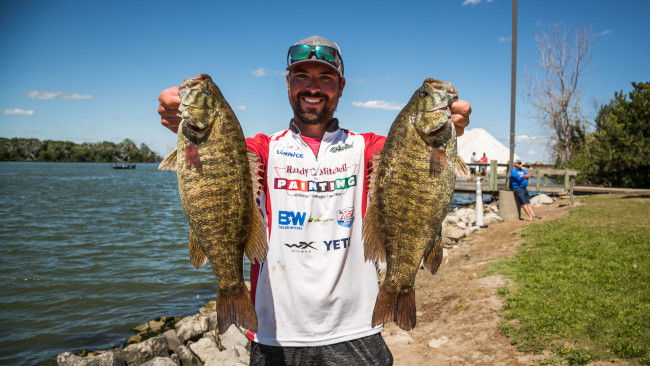 Coming off a week at Sandusky in which he locked in his qualification for the Tackle Warehouse TITLE presented by Toyota, Kurt Mitchell came back for round three on Erie.

“I took about a 40-mile boat run, it was probably the worst ride of my life,” says Mitchell, who ran through 6-footers to the west of takeoff.

“I’m fishing hard spots, just gravel areas in the sand,” Mitchell says. “The fish don’t live on those places, they just get on them to feed. Today, with the wind and stuff, they were feeding and I got three of the right ones.”

Fishing a Yamamoto Shad Shape Worm on a drop-shot, Mitchell caught about 15 fish, but he’s not banking on the same success tomorrow.

“I could very easily go there tomorrow and blank,” says Mitchell. “It’s just if the fish are feeding, if they feel like being there I’ll catch them. But, I don’t know where they go when they aren’t there.” 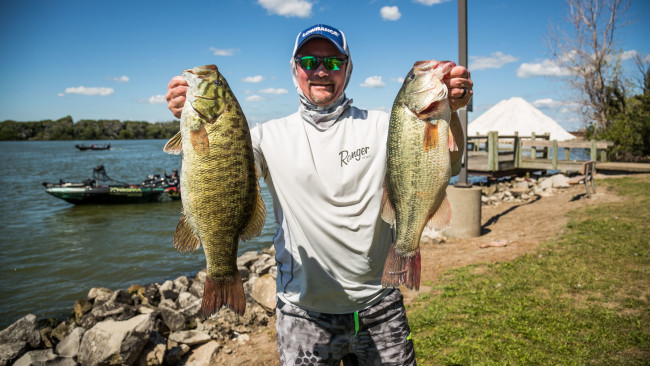 With eight career wins on the Detroit River with FLW, Mike Trombly’s presence in the top 10 is a definite concern for the rest of the pros.

“It was a little brutal out there, I have a Ranger 522D, but it’s still no fun running those big waves,” says Trombly, who headed west into Michigan waters today.

“I mixed it up between a drop-shot and a Carolina rig,” says Trombly, who actually moved around quite a bit. “I fished anywhere from 12 to 18 feet, I ran around, I cycled through maybe 10 or 12 spots, it was rough enough that you couldn’t cover a whole lot, but I hit enough spots to catch decent weight.”

Catching about 10 fish, Trombly lost the biggest one he hooked, and even mixed in a largemouth off an offshore spot.

“I’m gonna do the exact same thing I did today,” Trombly says of his plan for day two. “If the wind is northeast tomorrow, it should make for a little bit better running conditions, and we’ll go from there.” 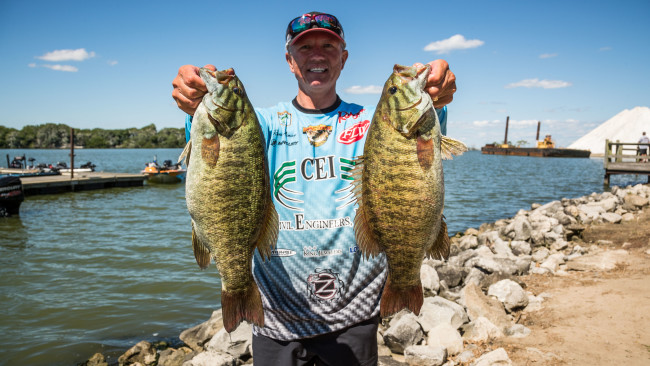 Putting the second mixed bag of the day in the top five, Randy Ramsey continued the westward trend.

“I caught three smallmouths and lost a big one, then that bite went away, and I went largemouth fishing after that,” says Ramsey.

Fishing in about 20 feet on one offshore spot for smallmouths, Ramsey hit a number of shallower offshore spots for his largemouths.

“In practice, I hunted for overlooked stuff,” Ramsey says. “It seems like if you’re anywhere near a harbor, you can find stuff out in the main lake that the largemouth come out to and hang out on.” 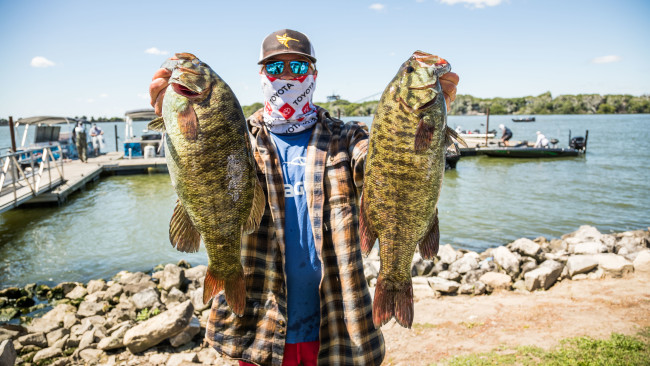 Coming off a top 10 in the first Northern Division event, Chase Serafin is running a similar game plan. Today, he ran over 2 hours to get into the Detroit River to fish.

“It was pretty quick when I got there,” says Serafin. “Once I found them, I caught seven in eight casts, culled twice and ended up catching between 20 and 30 fish.

“I was sitting on one spot, just a river ledge that drops off, the deep end is probably 22 feet, and it’s about 14 feet on top,” Serafin says. “If I can get down there the next two days, I imagine it should produce. I caught bigger fish there in practice, but today they were all twins.”

Serfin was Spot-Locked and casting a tube and a drop-shot for his fish today, and he says that he has a few other spots he’d like to hit given enough time. 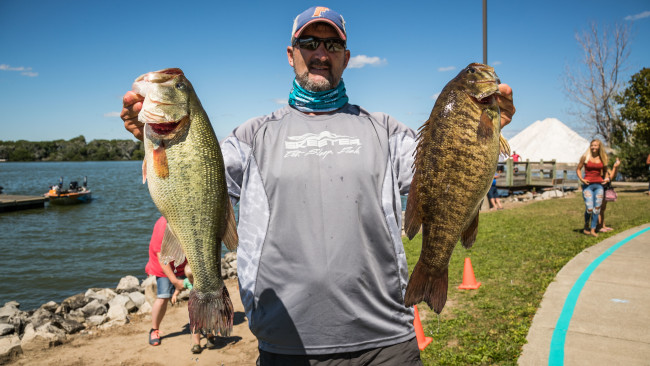 Fishing behind Ramsey, Edwin Bartlett smashed 20-5 and the co-angler big bass to take the lead in his division. With an edge of more than 2 pounds and only two other co-anglers over the 15-pound mark, Bartlett is likely in good shape to make day three with a limit on day two, but it’s still anyone’s game on Erie. If we’ve learned one thing from northern smallmouth events, it’s that catching a big bag from the back of the boat is possible at any time.