Even with a six-hour limit for summertime tournaments in California, the anglers in the field at the Toyota Series Western Division event on the California Delta caught some nice bags in a shortened day.

Twenty pounds is still the gold standard these days on this particular body of water, and three anglers eclipsed that mark on day one, led by local angler Beau Joudrey with 24 pounds, 9 ounces.

Joudrey, who hails from the host city Oakley, Calif., got off to a slow start to the morning before switching from topwater to flipping, which proved to be the difference in turning his day around.

“I started throwing a topwater and it was kind of tough fishing,” Joudrey says. “I noticed the fish weren’t totally committing to it for whatever reason. I switched it up and started flipping and ended up doing it all day.”

With an early lead, he was understandably tight-lipped about bait selection and other vital details, but admitted it wasn’t easy even though he had the biggest bag of the day.

“It was a grind,” he adds. “Hopefully I can do it again tomorrow.”

Arizona’s Michael Caruso is the lone angler in the top five from outside of California.

After weighing in, he was thrilled with his results after a mediocre practice.

“Today went a lot better than expected,” Caruso says. “I just went fishing and ran to an area that I knew had some big ones and fished through it, but we didn’t catch any. I decided to make another pass through and caught two really nice fish.”

Keeping it simple was the approach that led his second-place total.

“Honestly, it was all finesse fishing,” says Caruso. “I try to keep it simple whenever I come here.” 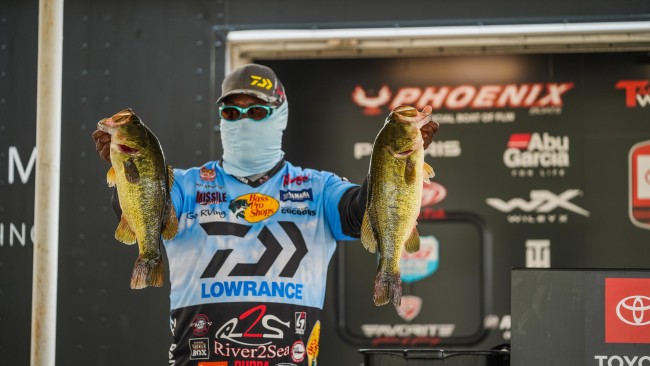 Major League Fishing pro Ish Monroe was the first boat out this morning and the first to weigh in. He started the week off right with a solid bag of 21 pounds, 4 ounces.

He played the tides and didn’t go to his best area right away, and that decision ended up working in his favor.

“There was about a thirty-minute window with a ‘dead tide’ where I planned to fish, so I ran to a different area to start the morning,” Monroe says. “I caught a keeper right away, then another. So, I decided to go down the whole stretch and it worked out.”

Monroe loves flipping and frogging and that’s all he did today.

“I just did what I do best,” says Monroe. 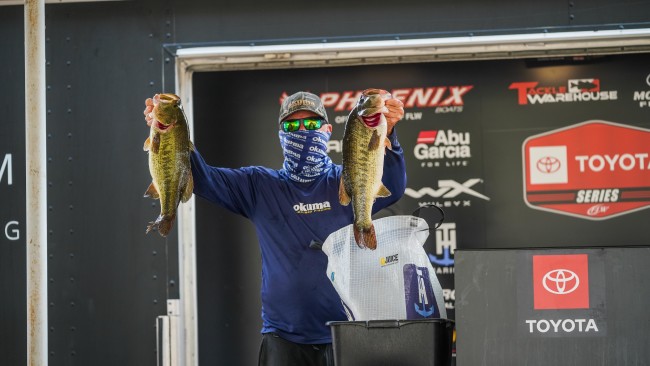 Lassagne was satisfied with his nearly 20-pound bag, but wonders what could have happened if he had gotten rid of some smaller specimens.

“I caught two big ones on a frog early on,” says Lassagne. “But, it was a grind and you had to fish it very slow to get them to bite.”

After the frog bite died, he switched to punching to fill out his limit.

“I punched one up that was about 4 pounds,” he says. “I ended up catching a few more doing that, but they were really small. If I could have caught two more decent fish, it could have been a really good day.”

Ryan Diatte, of Gilroy, California rounded out the top five with a limit weighing 19 pounds, 5 ounces. His strong start to the tournament was thanks to a strong start this morning.

“I had over 16 pounds in my first hour or so,” says Diatte. “I went to my first area and nobody was there. I was really surprised nobody else had found it.”

Diatte mixed it up and said both a topwater bait and drop-shot were key players for him.

“The bigger bites came on topwater, but the drop-shot was the second technique I was using.”

In total, he estimates that he landed fifteen keepers today and is hopeful he can get back to his primary spot tomorrow to catch another good bag.

Fishing from the back of Gary Souza’s boat, Oakdale’s Tracy Patton took the day one lead with a limit weighing 17 pounds, 12 ounces. He’ll carry a lead of nearly 3 pounds into day two.

Patton was quick to credit his boater for his successful day.

“I fished with Gary and it was awesome,” he says. “He was around fish all day, and even though it was a little slow for me, I got some good bites here and there.”

According to Patton, no particular lure or pattern dominated.

“Fishing slow and just waiting them out was the key.”