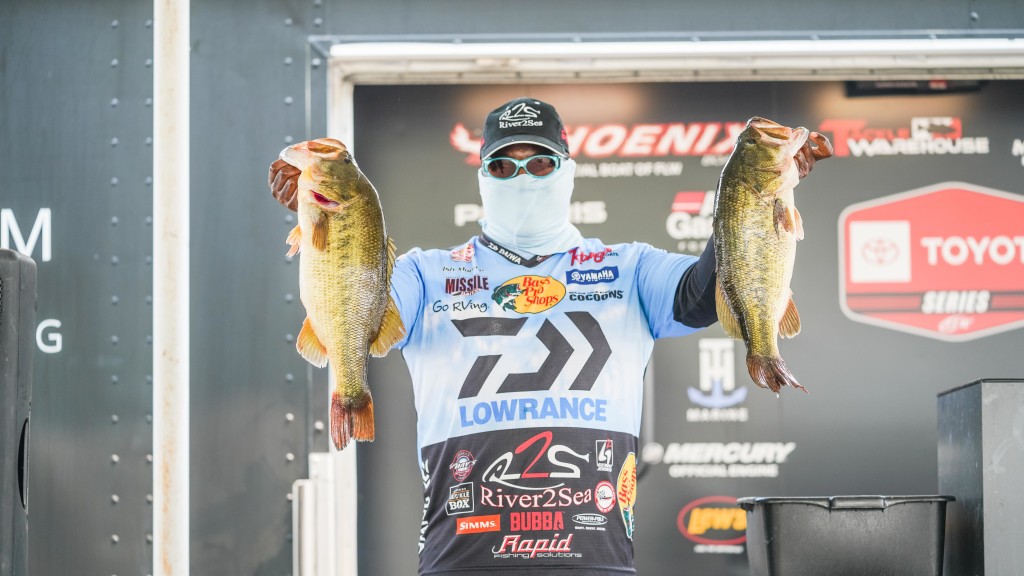 Wildfires in the area caused smoky skies all day while the temperature was also blazing around the California Delta for this week's Toyota Series Western Division event.

Ish Monroe may be hotter than both. He's on a hot streak this week as the only angler to crack 20 pounds on both days one and two. As a result, he’s now the tournament leader.

Fishing his preferred way, Monroe frogged and flipped his way to the big bag on his home waters. He's relying on his years of tidal water experience to fish the right areas at the correct times.

"I started the day on a brand-new spot and it was the right call," he says. "I caught a few decent ones there and then went back to where I started yesterday and caught another nice one."

Yesterday, he didn't even hit what he considered his best area due to the tides and his success elsewhere, but he made it there today.

"I went to what I think is my best area and missed a giant on a frog, but 30 feet later, I caught my biggest fish of the day," adds Monroe, who had both a 6- and 7-pound-class fish in his bag today.

Both of these fish came from that area while fishing a frog.

Overall, the pro affectionately known as just “Ish” is confident he can bring another solid bag to the scales tomorrow to contend for the win.

"Day two is so important in a three-day event, and you have to catch everything you possibly can, every day, if you want to have a chance at winning," he says.

Monroe claimed a 2009 Toyota Series victory and a 2008 FLW Pro Circuit victory on the California Delta. 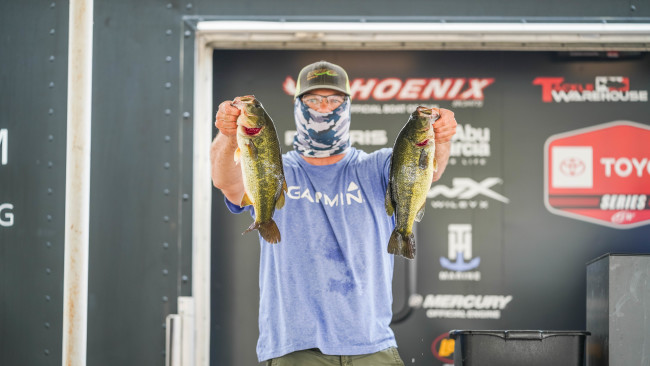 After sacking up a tournament-best bag yesterday, Beau Joudrey had to scramble just to get a limit today.

"It was much tougher for me today," Joudrey says. "I struggled all morning. I went after those same areas where I caught them yesterday and couldn't get a bite. They were not cooperating for me."

With his wealth of experience here, Joudrey abandoned the flipping plan entirely and made a big run in an attempt to salvage the day. It worked.

"I had to make a drastic change," he explains. "I drove 40 minutes away and started fishing reaction baits just to get a limit." 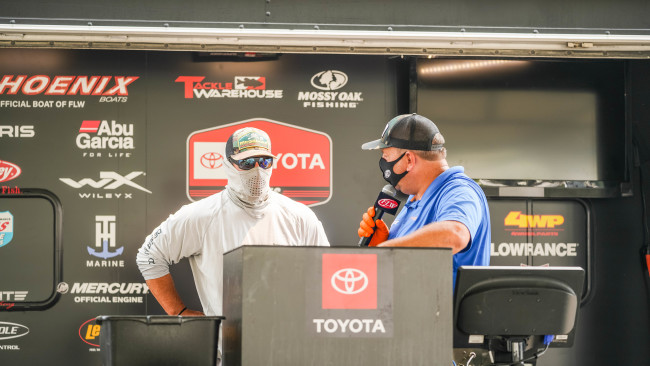 Like Joudrey, Michael Caruso saw his weight drop as he fell one place in the standings. Missed opportunities and smaller bass were the stories for Caruso.

"It was tougher on me, and I lost two good ones that would have really helped," says Caruso, who is fishing further off the bank and more exposed to the wind than just about everyone else in the field.

He's utilizing a spinning rod and light line to accumulate his weight.

"I've been sticking with finesse because that's what's working for me," he says. "I just hope I can execute better tomorrow." 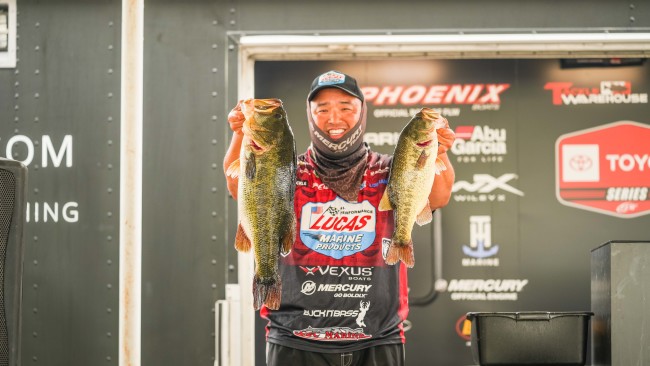 The potential to catch a 10-pounder is real here on the California Delta, and Ken Mah brought in the first one of the tournament today.

His 10-pound, 8-ounce bruiser earned the day's big bass award and raised his daily catch to over 24 pounds. That fish ultimately secured Mah a spot in the final day field. He credits an adjustment for his success.

"Today, I did everything different from yesterday and decided to put the topwater down," says Mah, who said he went big around heavy cover. "Everything I caught was with the big stick."

Looking ahead, he's unsure if he can do it again based on some things he saw today and the current conditions.

"The tide here affects so much, and my bite window is getting later and later every day," Mah says. "The tides for tomorrow and the weather have me concerned. I’m going to have to switch it up again." 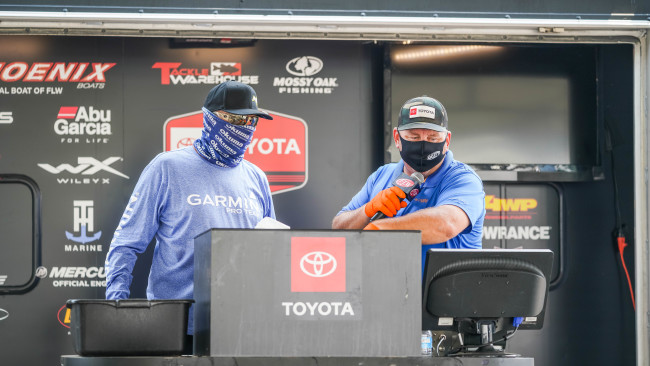 Also dropping one spot today was Mark Lassagne, who rounds out the top five. Yesterday, he caught two key fish with a frog and the rest punching. Today, it was all about punching thick cover.

"It started slow until my co-angler bagged a couple of good ones this morning," Lassagne says. "That clued me in to what was going on. I realized I had to get shallower and in the really thick stuff in 2 feet of water."

His bag today was shy of 15 pounds and says it was due to the lack of a big bite.

"Yesterday, I had three big bites, and today, it was three good bites," Lassagne says. "Instead of being 5s, they were 3 1/2-pounders." 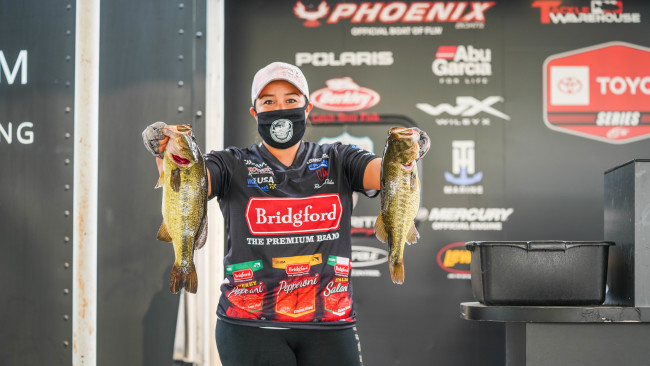 Long Beach, California’s Rachel Uribe began the day in sixth on the co-angler side and was able to improve on her day one weight to jump to the top of the leaderboard. Her 13 pounds, 11 ounces raised Uribe’s two-day total to 26-9.

"Pretty much all of my fish came on a drop-shot around sparse tules with a little bit of grass around them," says Uribe. "In practice, we were catching them on a Reaction Innovations Skinny Dipper with a 1/8-ounce bullet weight, and I saw a few opportunities for that. I would cast to any pockets in the grass that I saw and that’s how I caught my biggest fish today."

Uribe is one of the better-known co-anglers on the Toyota Series circuit, especially among Western Division anglers. In the last three years, she’s finished 15th or better in Co-Angler of the Year standings each season with a third-place showing to her name in 2018.