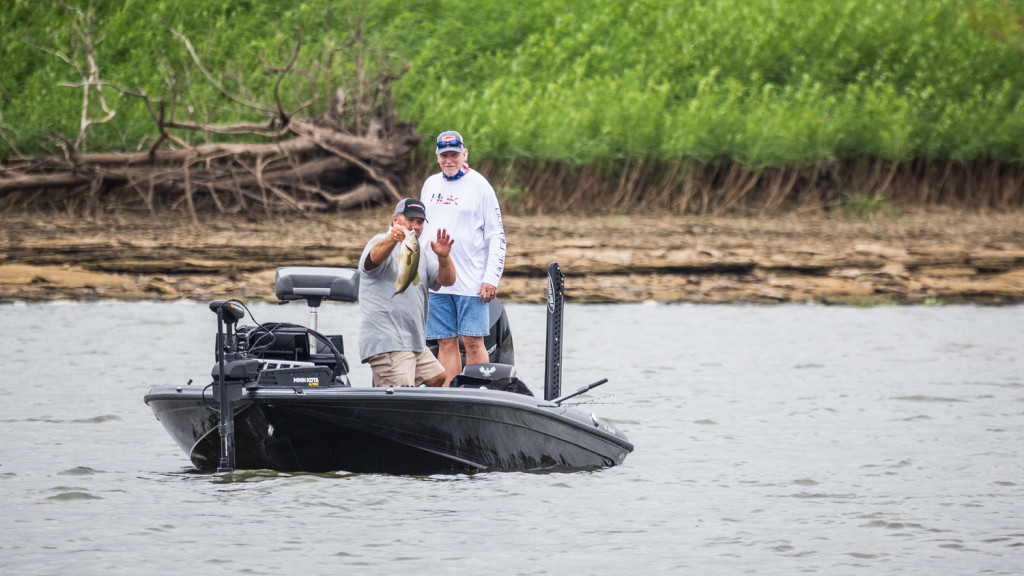 Day one of theToyota Series Southwestern Division event on Fort Gibson Lake is underway, as anglers largely from Oklahoma, Louisiana, Arkansas and Texas battle it out over an extremely low fishery. The waters at Fort Gibson, a nearly 20,000-acre reservoir along the Grand River, are sitting some 4 feet below average lake levels. Many local anglers report having never seen conditions this low, as submerged houses and a cemetery threaten to peak above the surface in some areas.

While navigating the lake in extreme conditions poses challenges, the fishing has proved equally challenging for the majority of the field. Thus far, only a handful of anglers have reported fish of more than 4 pounds. Among those, Lawrence, Kan., angler Nickalas Butler, Billy Hurt of Spring Creek, Tenn. and David Curtis of Trinity, Texas appear poised to make some noise atop the leaderboard this afternoon.

Curtis began culling by about 11:00 a.m., but very few boats have reported a limit so far. With completely overcast skies and very little wind, most anglers are pursuing a bite by running topwater baits through the abundant schools of bait found throughout the lake, including Italian angler Jacopo Gallelli who boated a solid keeper up shallow.

The majority of the field is fishing the southern end of the lake, though a few reports have come in of successful expeditions to the northern end. Local favorite Tommy Biffle hadn't reported a limit by midday; but the legendary angler should be considered a threat at any weigh-in on his home waters.

Right now, the key to victory at Fort Gibson appears to be unlocking the code of the unusually low waters that very few in the field have ever fished here. Local knowledge could come into play, as fish that were holding out in shoreline grass last week have become difficult to find.

Tune in for the live weigh-in starting at 3 p.m. CT to see what anglers crack the code on Fort Gibson.