What the top pros used to battle the fall transition 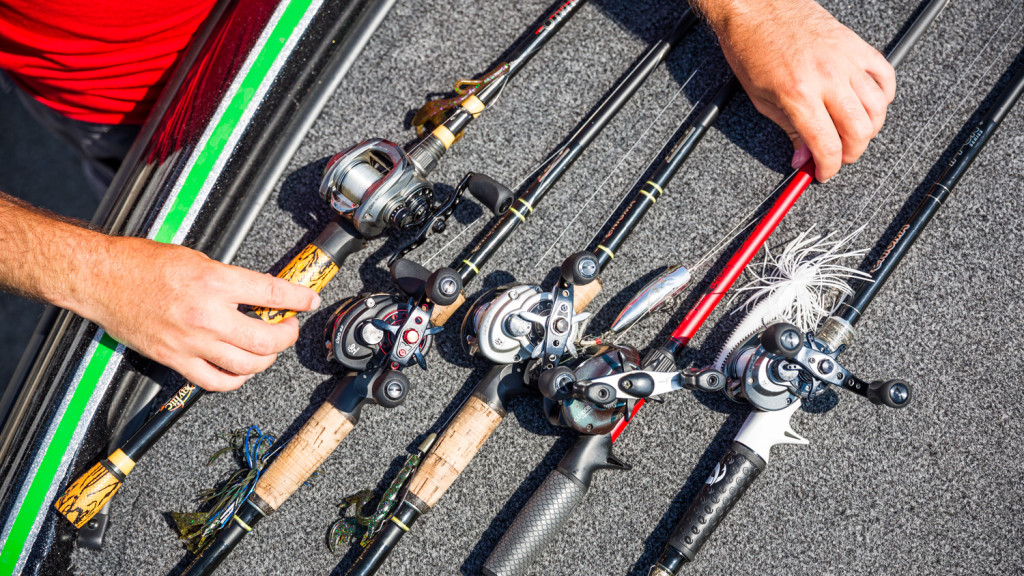 Low water and changing weather patterns meant tough fishing at for the second stop of the Toyota Series Southwestern Division at Fort Gibson. While day one brought in prime topwater conditions, days two and three generally saw anglers slogging it out for bass stuck somewhere amidst the fall transition. Fittingly, a few well-known baits are tailor-made for that kind of fishing—including a regional favorite named for the lake’s most legendary fisherman. 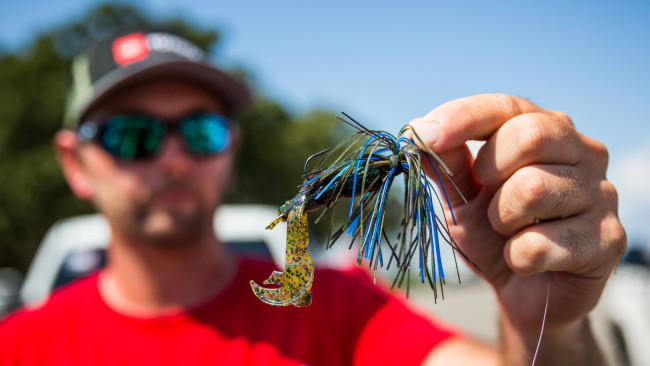 1. Tournament champion Cameron Foster made his living on a Grand River bend with pea gravel, submerged wood and mud. He used a 1/2-ounce Okeechobee craw Bass X football jig with a wire weed guard and a green pumpkin Strike King Rage Craw trailer. Notice the unique weed guards, which Foster credited for setting his jig apart from the field. He also deployed a 1/2-ounce Z-Man ChatterBait with a white 3.8-inch Keitech Swing Impact FAT trailer as a secondary bait. 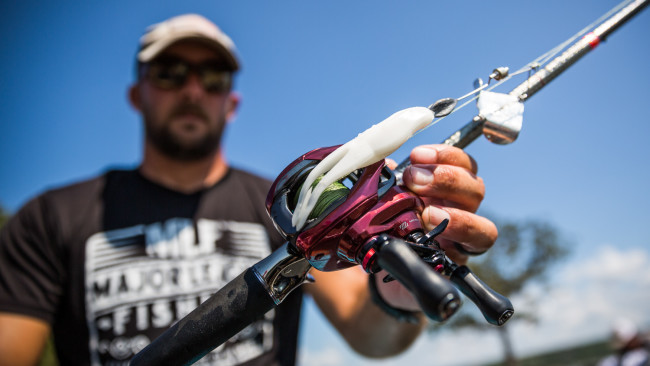 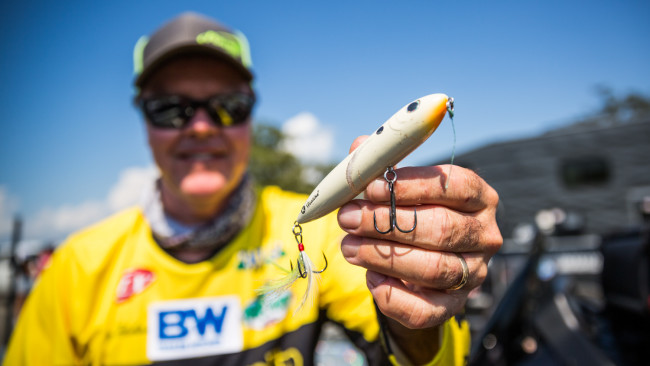 3. Terry Hawkins relied on a bone colored Heddon Zara Spook with a chartreuse and white bucktail to target early morning bass on a shallow point each day. Hawkins was able to spot the bass chasing schools of bait and entice a strike with the old warhorse of topwater fishing. Hawkins switched to a smoke silver Gene Larew Biffle Bug married to a 5/0 hook and an All Terrain Tackle Swing Rock Jig for culling. 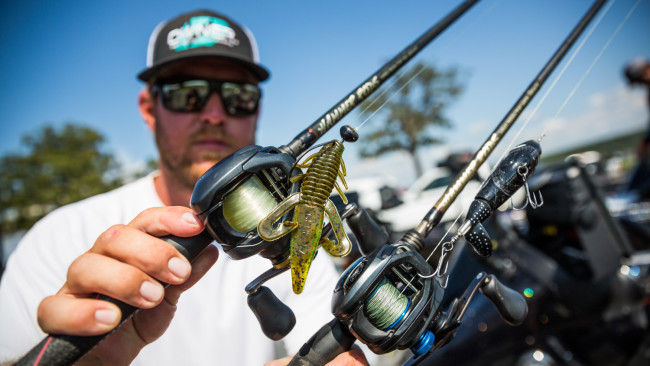 4. Dakota Ebare was fishing the fall transition and searching for bass in the middle of creeks that were moving up. He was among a heavy contingent of top-10 finishers deploying a Gene Larew Biffle Bug to boat bass. He paired the prolific soft plastic with a Gene Larew Biffle Hardhead jig. Ebare also caught fish using a River2Sea Whopper Plopper 110 that he modified with Owner Zo Wire treble hooks.

5. David Curtis says he caught fish on 15 or so baits, as he was never really able to dial-in a pattern. His most productive bait was a green pumpkin Gene Larew Biffle Bug with a Strike King Tour Grade Tungsten Swing Football Head and 3/0 Owner Jungle Flippin’ Hook. However, he also caught fish regularly with a citrus shad Strike King Series 5 crankbait. 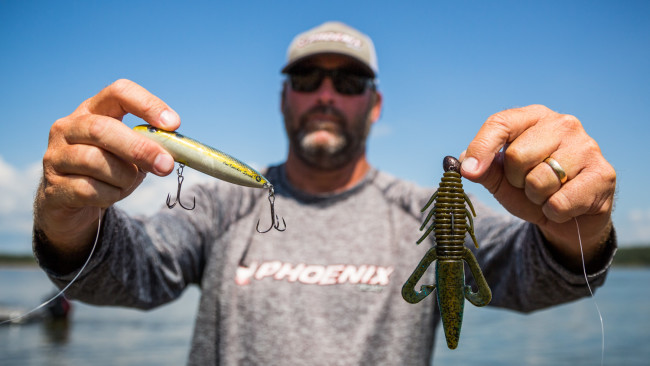 6. Brett Brumnett used a 5-inch Gene Larew Biffle Bug in bama craw for most of the tournament, dragging it along the bottom and swimming it at times. He says his biggest fish each day came from the bait that takes its name from Fort Gibson’s most well-known local – Tommy Biffle. Brumnett’s secondary bait was a “shad colored” Heddon Zara Spook that he says produced periodically each day. 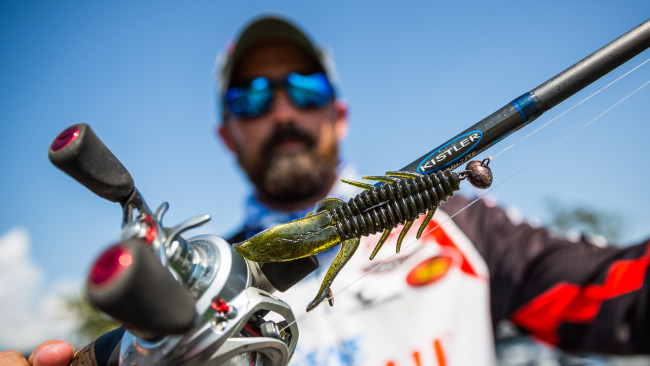 7. Tackle Warehouse Pro Circuit pro Kyle Cortiana’s strong showing was powered by both the 5-inch and regular size (4 1/4-inch) Gene Larew Biffle Bug with a Gene Larew Biffle Hardhead. Sooner run and black neon were his most productive colors of the Bug. In a diversion from much of the field, Cortiana says he Texas rigged the Bug at times with an unpegged 1/4-ounce weight. He says the move got him more strikes, but also lost him a few fish when the weight snagged on the bottom. 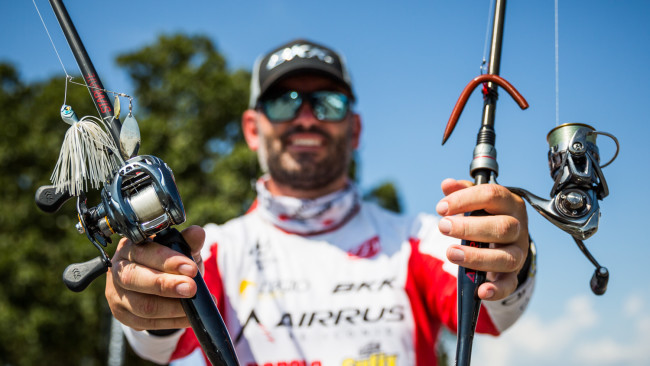 8. Jacopo Gallelli returned from Italy shortly before the Fort Gibson affair and spent six days getting back into tournament shape. He’s fishing for points to qualify for the Tackle Warehouse Pro Circuit and targeted bait-chasing bass with a 5/8-ounce Elite Lures JG Spinnerbait in JG Herring color. He also deployed a wacky rigged Legio Aurea Commodus Conqueror Stick and 4/0 hook as a finesse tactic throughout the event. 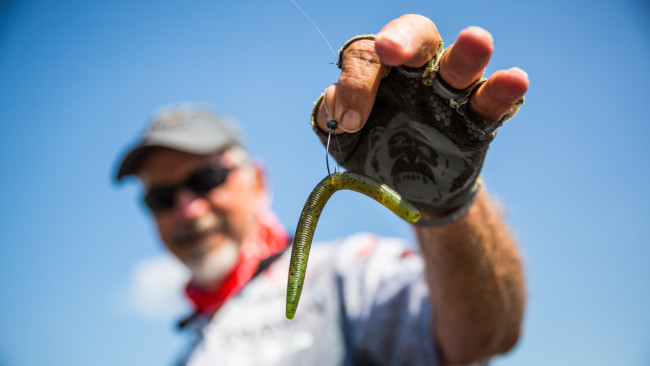 9. Darrel Robertson was fishing a green pumpkin Yamamoto Senko wacky style with a 1/0 Gamakatsu Wicked Wacky hook around brush. He called the rig a “fish catching little dude” and says a methodical approach allowed him to stay away from snags and boat enough bass for a top-10 finish. 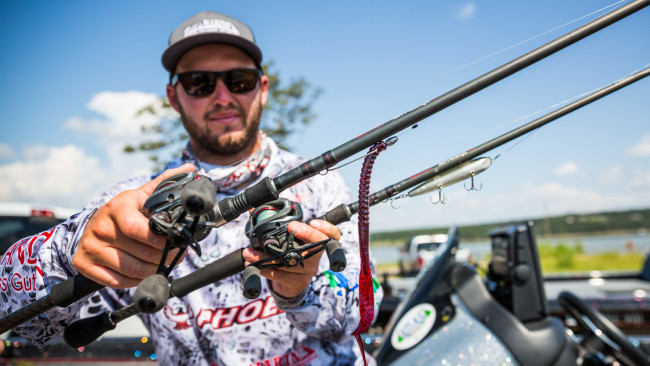 10. Blake Capps used a shad-colored Heddon Zara Spook to target topwater bass under overcast skies on day one, but transitioned to brush piles with a Texas-rigged, 10-inch Berkley Powerbait Power Worm in junebug. Capps used a 5/16-ounce weight and a 5/0 Gamakatsu Round Bend Worm Hook hook to complete the setup.