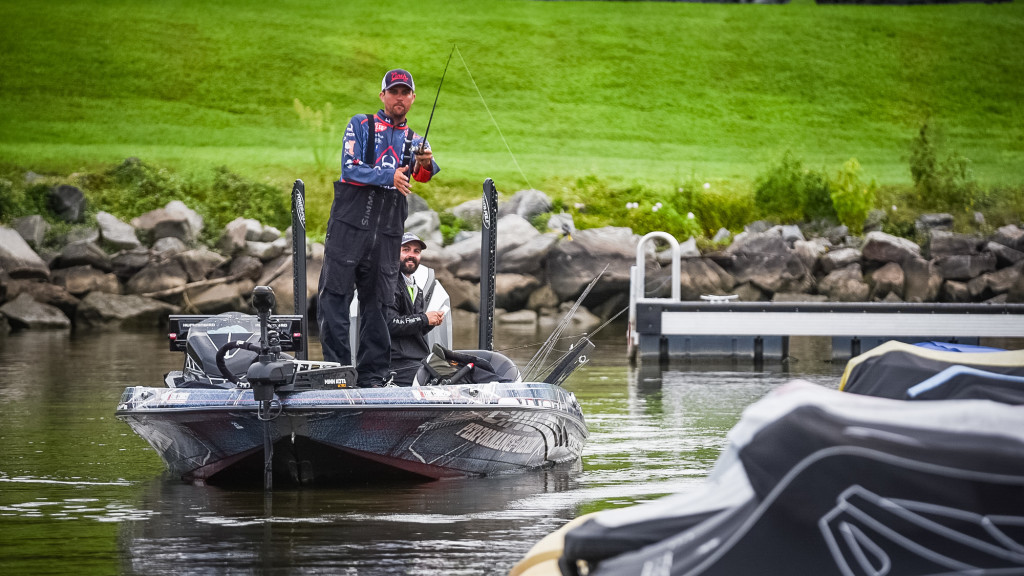 September is a tough time to fish almost any body of water and while the Potomac River may not be showing its true colors for the second stop of the Toyota Series Eastern Division the top pros are making do. Wayne Vaughan dropped 17 pounds on the scale to take the lead thanks in large part to his 6-5 kicker. Behind him, however, is a pack of hungry pros – some locals, some not – separated by just a few pounds with their sights set on fishing in the championship round. 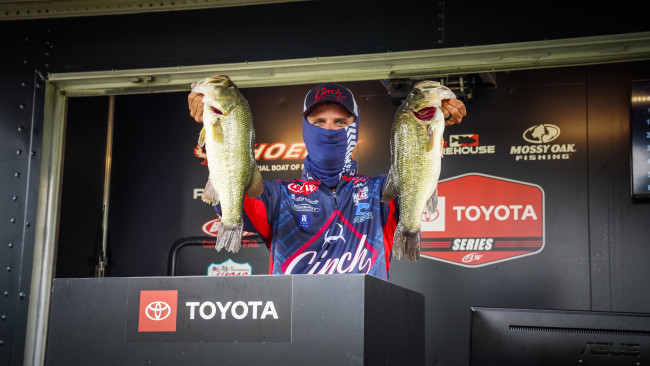 Roughly six hours from home, Preston Harris isn’t overly familiar with tidal fisheries, but that didn’t stop him from sacking up the second-best limit of the day.

“I don’t have any tidal experience really,” says Harris. “I fished the James River last year at a B.A.S.S. Open and did horrible but learned quite a bit from that experience. I basically did the opposite of what I did down at the James and it worked out. I formulated a game plan and it just worked out.”

With as tough as things have been on the Potomac, Harris wasn’t quite sure if the areas he found in practice would produce. To his surprise, they did.

“There’s a little luck involved with it as tough as it is,” he says. “I found a couple little areas in practice, but it’s been so tough I didn’t catch much, and didn’t really know the potential. I caught a small limit with two nice ones where I started. Then I waited ‘til the tide got right and moved to another area and caught three more to cull. I didn’t have the confidence to go straight to that area this morning, so I wanted to make sure I had a limit before I went there to upgrade."

While his secondary spot seems to have the quality he’s looking for, Harris isn’t certain he can replicate it for another day.

“Honestly, there’s a lot of boats in the areas I’m fishing,” he says. “There’s quality where I’m fishing and I hope I can get a couple good ones. I have to capitalize early and roll with the areas I have.” 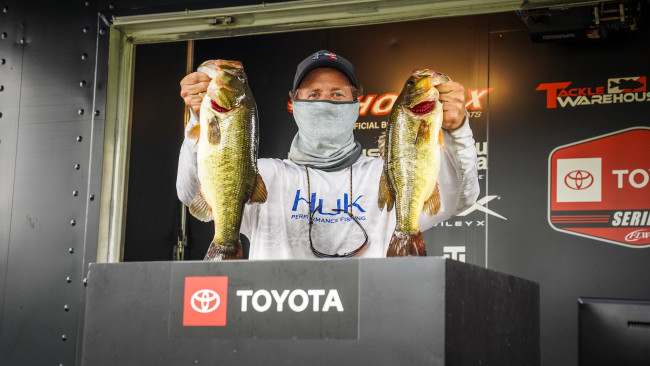 Though Huwar fishes as a boater and co-angler at the Phoenix Bass Fishing League presented by T-H Marine level, he’s never dipped his toes into the Toyota Series ranks. Until this week. Now, Huwar is in the running for the biggest win of his career.

“I was just ready to give it a whirl, I’m not getting any younger,” Huwar jokes.

Even though he’s fished the Potomac plenty over the years, Huwar knew this event wasn’t going to be easy.

“Practice was extremely slow,” he adds. “I knew I had some areas with fish, but I didn’t catch much in practice because I knew it’d be tough.

“I ran around quite a bit. I didn’t camp in one spot. I got some fish off one spot this morning and left them biting because I need a couple more days out of them, so we’ll see how that goes. We'll see if it was a wise decision or not.”

Time will tell if his decision will pay off, but regardless, Huwar is fired up about getting back out on the Potomac.

“I’m excited about tomorrow. I got to my spot early this morning and wasn’t going to go there until later with the tide, but with the rain figured I’d try it early. I got them there and peeled out and caught them on a few other spots quite a distance away, so I’m excited.”

Pike may call the James River home, but the Potomac is proving to be a nice home away from home for the Virginia pro. With two Phoenix BFL titles to his name from the Potomac – one of which came earlier this year – Pike is now on the hunt for some bigger hardware to add to his collection.

“I’ve done good up here a few times before and what I like about this place is that it changes all the time,” Pike says. “I live on the James River and it's not like there, where you know what brush pile you’re going to pull up to and catch fish. The Potomac is all grass. You just have to have a basic knowledge of grass and tides and you’ll be OK.”

Having to change game plans during the tournament would throw a lot of anglers off their groove, but not Pike. After throwing his original game plan out the window he scraped together a very respectable limit on the Potomac.

“I had thought I found some fish and thought I found some real good ones, but the area got muddy,” he says. “So, today I just had to go scramble around to catch what I had. I did catch four or five off one spot, which is good, but I wish we had more sunshine because flipping a big weight and clouds don’t really go hand in hand.

“There’s a possibility of having a really big bag there I think, but I think boats are going to be a problem. I think three of us in the area are in the top five.”

One of those pros happens to be Pike’s roommate and also the tournament leader – Wayne Vaughan.

“Wayne is one of my good friends,” says Pike. “I got half a notion tomorrow just to leave it all along and leave it all to him because it can’t take that pressure.

“I got one other area I went to today for 15 or 20 minutes and caught one 3-pounder and saw another guy catch a 3-pounder and it was just me and him there. Tomorrow I may spend some more time fishing that more sparse grass with a swim jig or Speed Worm or something.” 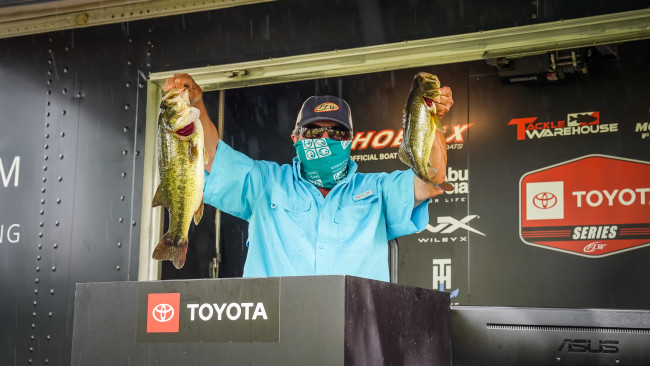 Though Kirk calls Georgia home, he’s no stranger to competing on the Potomac. The former Tackle Warehouse Pro Circuit and B.A.S.S. pro has spent his share of days on the tidal fishery, albeit most of that was over a decade ago.

“I was up here practicing for five days or so, but I spent a lot of time on [the Potomac] years ago,” Kirk says. “It’s tougher now than it was back then, but you know, everywhere this time of year is tough."

Given his past experience, Kirk is comfortable running the tide and that’s exactly what he did today. While some anglers kept to given areas of the river, Kirk moved “several miles” throughout the day, catching close to 14 keepers.

“I try to work the tide,” Kirk adds. “We don’t have a good tide this week. We’re fishing low to high tide.

“Today was what I hoped for. I thought I might catch 14 pounds, but I didn’t really know because when I got a bite in practice I moved on. I never worked those fish and I didn’t stay on the fish I weighed-in today either."

With more rain and clouds in the forecast for tomorrow, Kirk is hopeful he can repeat his success.

“I think I’ll catch five, but I don’t know what size they’re going to be.”