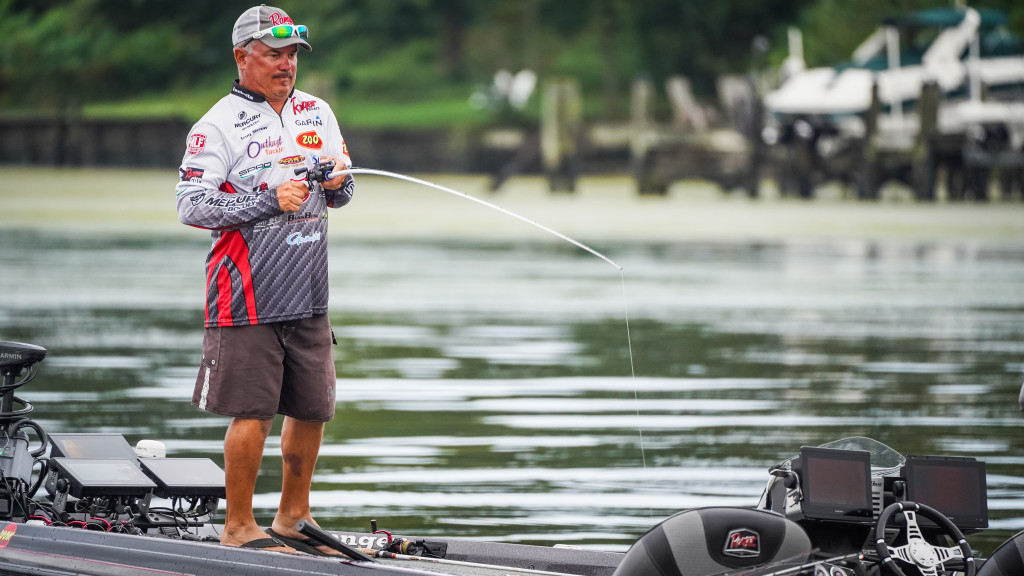 Clouds once again greeted the field for day two of the Toyota Series Eastern Division event on the Potomac River and the fish were biting this morning. With low tide this morning around 8:40 a.m. ET – about an hour and a half later than yesterday – more anglers had time to capitalize on the strong bite revolving around that window today.

Like yesterday, most of the field are scattered along the massive grass flats on the main river of the Potomac, with several pros doing work with topwaters this morning.

Day-one leader Wayne Vaughan started fishing grass this morning and put a keeper in the box within the first hour before he started running other spots. He's got plenty of local knowledge on the river, so there's no telling what adjustments he'll make today to stay in the hunt for the win. From there we caught up with Preston Harris, who started the day in second and as of noon only had a 2-pounder and another keeper in the box.

Fifth-place pro Danny Kirk had a limit worth 9 or 10 pounds when we caught up with him this morning, which will be a solid foundation for him to work with heading into the afternoon. Nearby, Troy Morrow also had a limit for roughly the same weight. Down the line, both Kurt Mitchell and Bryan Schmitt had 12-pound limits and did most of their damage early in the day. The nice thing for these two Potomac hammers is that they still have a lot of time to upgrade and make a run at the top 10 – especially considering they were both about 2 pounds of the cut yesterday.

The bite has dwindled as the tide started to rise. Still, some anglers yesterday caught key fish in the afternoon despite numbers becoming scarce in the afternoon hours. Mike Iaconelli reported a small limit worth 8 pounds and is one of those anglers who’ll need a kicker or two if he wants to try to climb his way into the top 10.

With a few hours left to fish until the first flight is due back in at 3 p.m. ET, a lot can still happen. Today is cut day, so the top 10 pros and co-anglers will advance to Saturday’s final round, and the rest of the field will head home – though some with more money in their pockets. Tune in to the live weigh-in at 3 p.m. to see how the leaderboard shakes out.