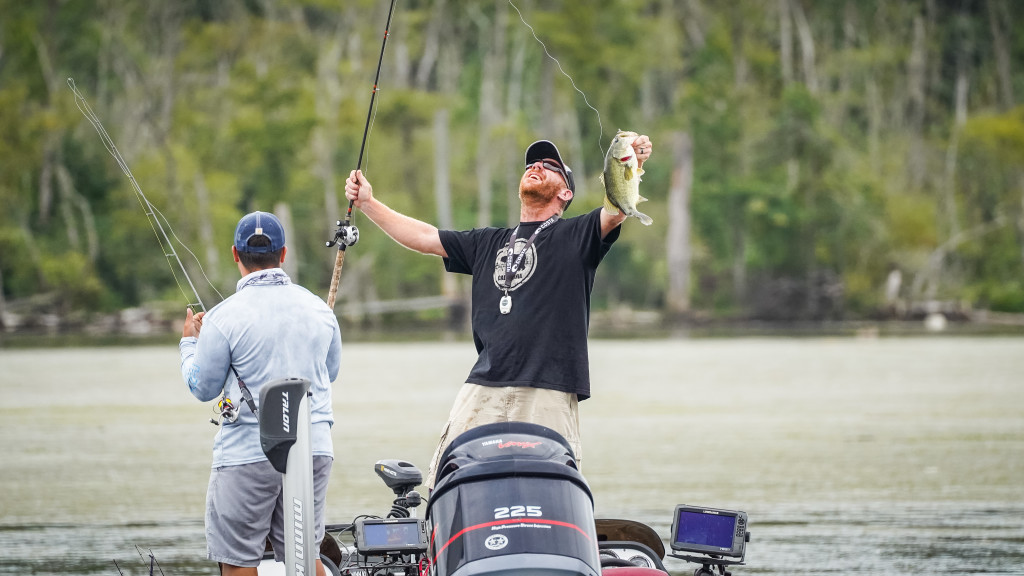 The final day of the Toyota Series Eastern Division event on the Potomac River was supposed to be a drastic contrast to the first two days of competition where the field dealt with clouds and rain, but so far the weatherman has been wrong. Clouds have lingered throughout the morning, which most of the top 10 were thankful for as the bite has been better than it was during practice when conditions were calm and sunny.

Wayne Vaughan started the day with nearly a 5-pound lead over James Maupin, but it’s been slow going for the Virginia pro. Our on-the-water crew spent time with Vaughan this morning and watched him put one keeper in the boat, but after fishing his primary area Vaughan said it “didn’t feel right” so he packed up and made a move. He put his second keeper in the boat, but things were slow, so our crew moved on. Yesterday started about the same for Vaughan – who wound up weighing 14 pounds, 10 ounces thanks to some key bites later in the day – so there’s still plenty of time for Vaughan to make things happen.

Maupin on the other hand has had a phenomenal day. We caught up with him mid-morning and he caught a 3 ½-pounder to push his limit close to 14 pounds. Maupin has been taking advantage of the wind and clouds to chunk a spinnerbait in one area all day, and it's clearly been working for him.

Otherwise, the bite has been substantially slower today. While many anglers utilized topwaters, vibrating jigs and spinnerbaits earlier in the event, they now have turned to finesse stuff like Senkos and drop-shots.

Todd Walters, Cody Pike, David Williams and Kurt Mitchell all had one or two keepers in the boat when we caught up with them. Potomac River specialist Bryan Schmitt was still on the hunt for his first keeper when we found him this morning.

With just a few hours left until the anglers are due back in at 3 p.m ET to start the weigh-in, you’re not going to want to miss the live stream to see who takes home the Potomac River crown on both the pro and co-angler sides.