Top Patterns and Baits from Dardanelle 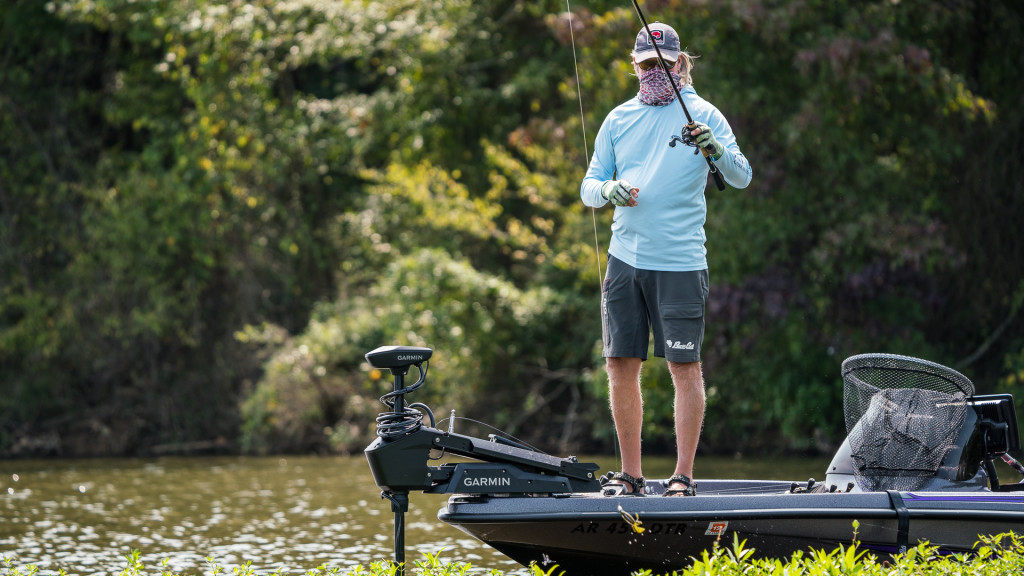 The beginning of the fall transition coupled with dirty water from end to end created difficult fishing conditions at the Toyota Series Plains Division opener at Lake Dardanelle presented by Fish-Intel, but anglers focused their attention to the backs of creeks and used a variety of baits to solve the riddle. 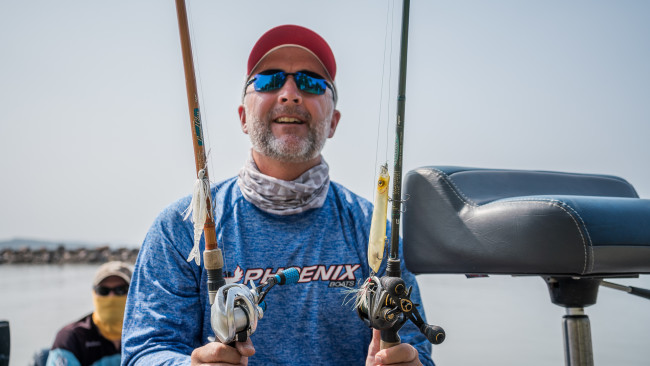 1. Tournament champion Jason Lieblong targeted bass corralling shad in a backwater with a high-low approach. He caught most of his fish with a white Z-Man ChatterBait Jack Hammer, however, he also had success on top with The One, a discontinued topwater by Paycheck Baits. 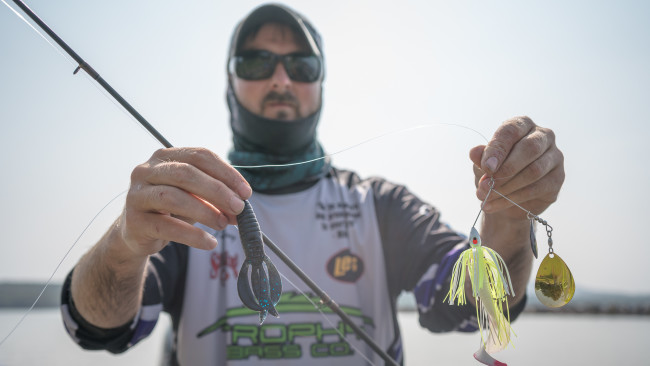 2. Kevin Riney found a bass factory in a compact area near the Hwy. 109 Bridge. He mined it for all it was worth with a War Eagle Wake spinnerbait (white/chartreuse) with No. 5 and No. 6 Colorado blades. Fish that missed the spinnerbait got a follow up cast with a Berkley PowerBait Pit Boss pitched on a 3/8-ounce weight. Riney would hop the bait quickly to try and provoke reaction strikes on the bottom. 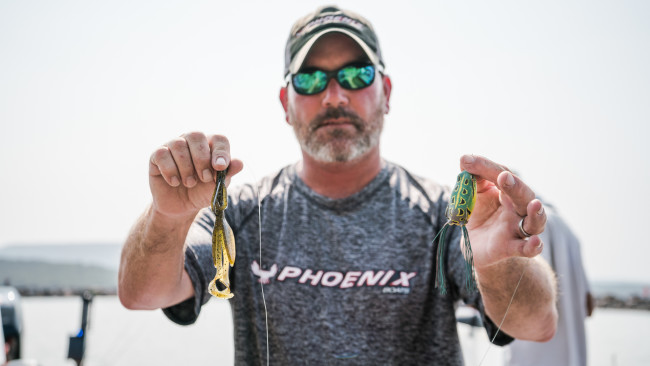 3. Teddy Bogard used several patterns to catch about 30 keepers. He combed main-river shell beds near Spadra Creek with a chrome Bill Lewis Rat-L-Trap. He also coaxed hard-earned bites from bass in tight quarters by throwing a SPRO Bronzeye frog or flipping a watermelon/candy Zoom Brush Hog until he aggravated a fish enough to bite. 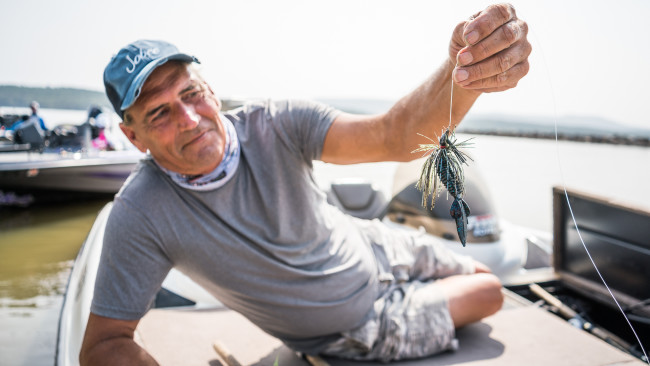 4. Joe Bennett used a highly unconventional approach to make a serious run at the title. He fished a small cluster of docks directly across from Lake Dardanelle State Park.

“I went back to my roots,” Bennett says. “I live on Lake of the Ozarks where they’ve got 70,000 docks. You know how many guys have been fishing these? Zero.”

“It thumps like crazy,” Bennett says. “They come out and smoke it.”

He used an old, 5-foot, 8-inch G. Loomis rod to cast the spinnerbait. The short rod delivery is a forgotten tactic that Bennett pioneered decades ago at Lake of the Ozarks.

The “two” part of the punch was a 3/8-ounce Jewel jig with a Reaction Innovations Sweet Beaver as a trailer. 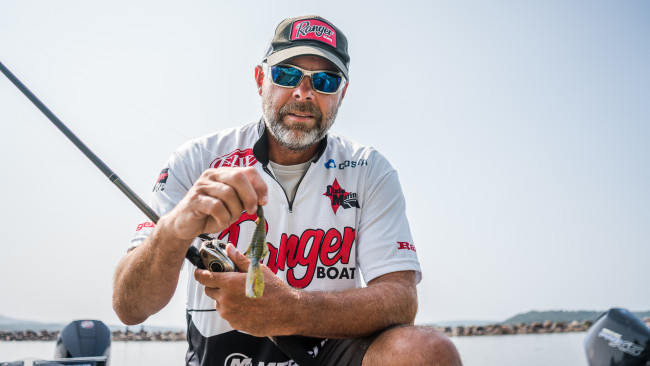 5. Steve Floyd targeted shallow wood cover in the backs of creeks by flipping a green pumpkin Strike King Rage Bug around laydowns where shad were present. 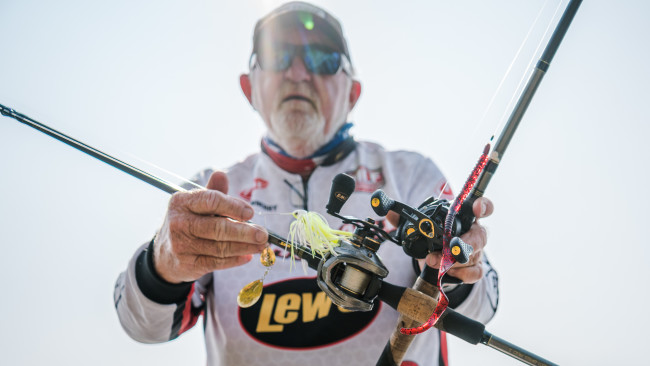 6. Dicky Newberry fished a different variation of the pattern employed by Steve Floyd and Billy Doak. Instead of targeting cover in the backs of creeks, Newberry targeted laydowns and stumps at the mouths of creeks. His primary offerings were a chartreuse and white, 3/8-ounce Santone spinnerbait and a 10-inch redbug Mister Twister  Hang 10! Worm. 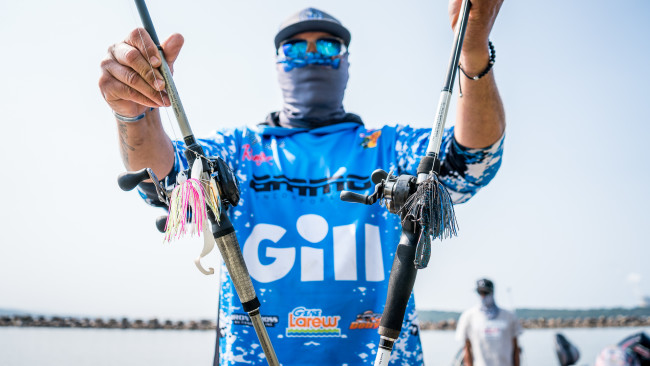 7. Billy Doak spent the entire tournament fishing coffee-colored water in O’Kane Creek, on the south side of the Arkansas River towards the top of the lake. Falling water levels made it increasingly difficult every day to get over the mud lip at the mouth of the creek. Inside, it deepens and contains a smorgasbord of wood cover. Doak worked the cover with a spinnerbait and jig. The spinnerbait is actually a locator, Doak says. Fish that missed got a look at the jig with a Strike King Rage Bug. 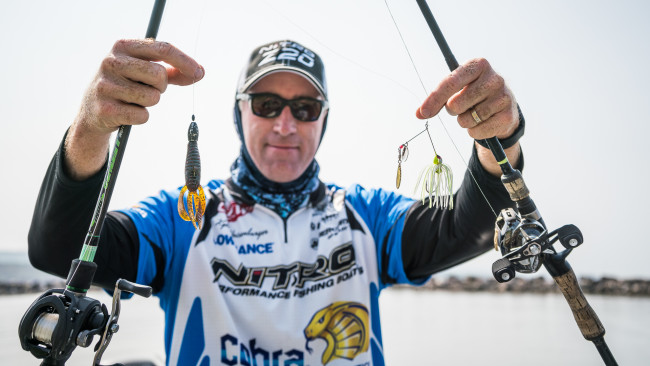 8. Kyle Weisenburger overcame a slow start late in the first day when he found success flipping grass mats with a Berkley PowerBait Pit Boss in California color with a 1 1/4-ounce Strike King Tour Grade Tungsten weight and a 3/0 Trokar Flippin’ hook. Unfortunately, the mats held a very limited number of fish, and Weisenburger says he finally exhausted the supply. Weisenburger also used a chartreuse and white, 5/16-ounce Dweller spinnerbait, which is made locally in his home state of Ohio by Ron Hiles. 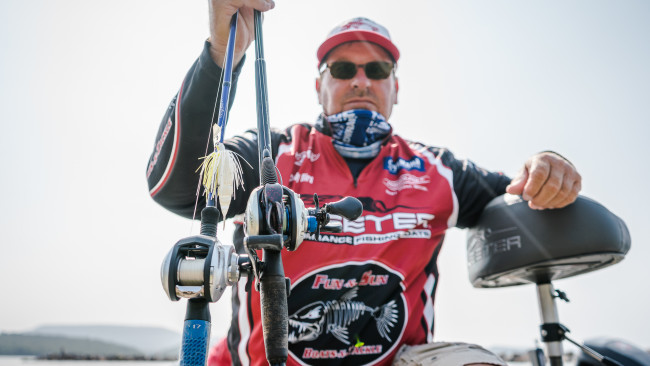 9. Cody Bird took advantage of heavy current in the upper part of the lake by targeting eddies behind wing dams and revetments. He says he ran 20-30 eddies a day and fished some of them multiple times.

“You can tell when you’re in the right eddy because it will pull your boat against the grain,” Bird says. “It’s really hard to catch those fish. You had to fish and fish for them and change baits. I just used fast-moving baits.”

His main bait was a chartreuse and white Z-Man ChatterBait Jack Hammer with a white Lake Fork Live Magic Shad trailer. He says it usually took multiple casts to get the bait in the optimum position in a current seam. 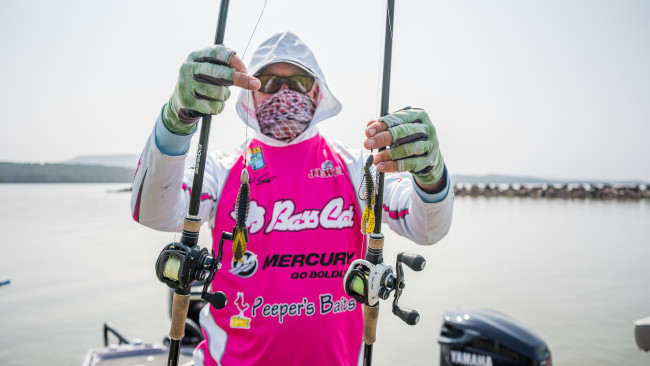