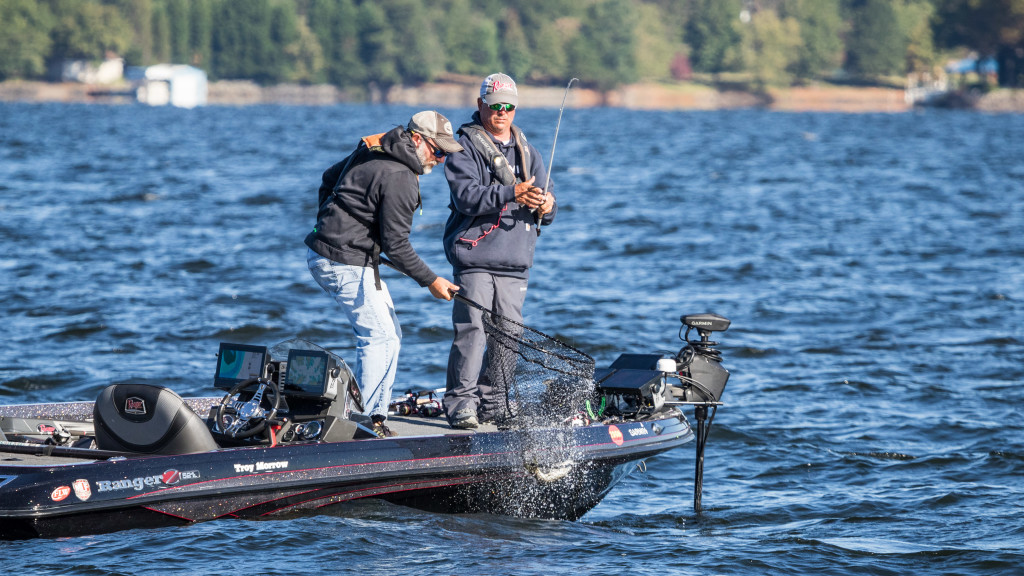 Anglers fishing the Toyota Series Eastern Division event on Lake Norman on day two were greeted with brisk north winds and temperatures in the high 40s this morning. The conditions seemed to spark up a better bite as many anglers were catching more fish than yesterday in the early morning hours.

Tournament leader Michael Stephens was fishing docks with a shaky head and bouncing around on offshore shoals with a drop-shot. He was catching plenty of fish but boated just one keeper early and then hit a lull. However, Stephens seemed undaunted by his slow spell as he caught most of his better fish late yesterday.

Runner up Martin Villa started the day finesse fishing around docks and bagged two keepers right off the bat.

Chris Baumgardner was slow-rolling a big spinnerbait over offshore rock in the wind and already had three keepers.

Bryan Thrift was cranking brush piles and had secured a small limit early.

Cody Pike was making a buzzbait work in the wind and had a limit in the box as well.

Local guide Drew Montgomery had two in the box as well.

Many anglers noted their best fishing yesterday was in the afternoon as that seemed to be when the keeper-sized spotted bass bit best. Those putting fish in the well early described them as being bonus fish.

With the morning bite as strong as it was, it ought to bode well for weigh-in. Be sure to tune in at 3:30 p.m. ET to see how the day shakes out and who makes the cut for the final day.