Shallow, deep and in between all play 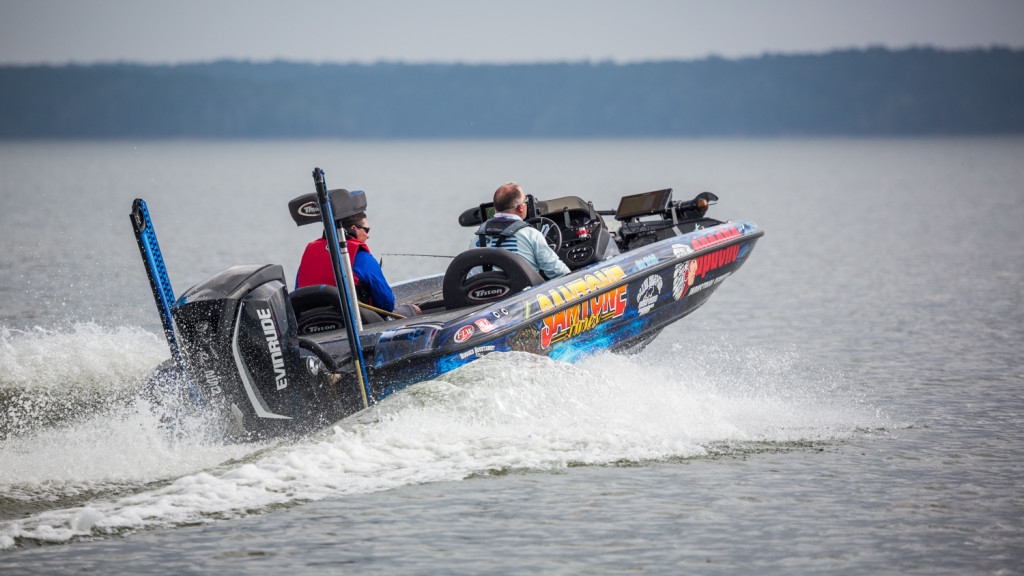 Day one of the Toyota Series Southwestern Division event on Sam Rayburn offered pretty good fishing and a lot of options. Anglers in the top 10 fished deep, shallow and in between to catch their fish, and no one pattern dominated the leaderboard. The only pro to break the 20-pound mark, Cole Moore took the lead fishing mostly deeper, or at least mid-depth. Tomorrow, the weather is expected to change, with plenty of wind and cooler temperatures – overall, most think it will make the fish bite, but it could make fishing and navigation difficult on the big lake. 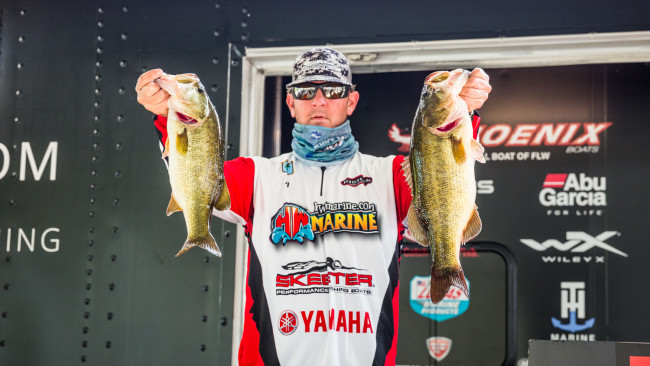 Staying shallow, or at least around grass the whole time, Aaron Johnson put together a pretty banner day.

“If you would have given me 15 pounds and told me not to launch my boat this morning, I would have probably taken it, that’s how tough practice was,” says Johnson, who lost count of how many keepers he caught today. “They were all just quality fish, I might have had a 5-pounder in there, but I probably caught 15 or 20 keepers.”

Looking forward to the wind tomorrow, Johnson says playing it right around the grass was his key today.

“I’m basically just playing the wind,” says Johnson. “When the wind is blowing and it’s choppy, I’ll move fast, and when it’s down I’ll slow down. I was surprised they bit as well as they did today, it wasn’t windy, but it was windier than it’s been in three days.” 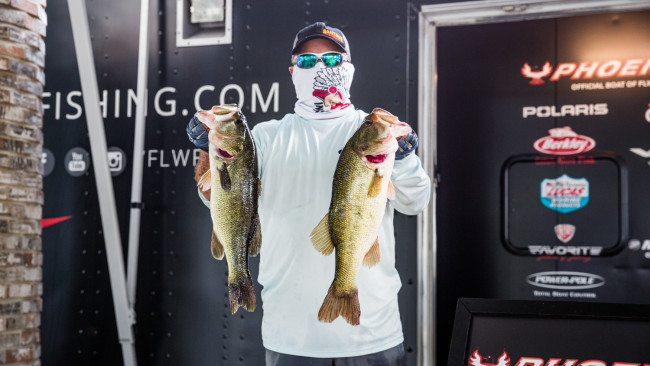 Chris McCall has two Toyota Series wins on Rayburn to his credit already, but he’s now firmly in the running for a third. McCall now guides on the lake, and he really only decided to fish the event on Monday.

“It’s been really tough, I fished four days last week, and three of those days were pretty terrible,” says McCall, who did well enough last Thursday to get him thinking about the event.

Today, McCall utilized all his history on the big lake.

“I burned 31 gallons of gas today, I’m burning the bank, I’m hitting brush piles, it’s typical fall fishing,” says McCall. “I’ll catch one on a Rat-L-Trap, catch one on a swim jig, and then go out and hit a brush pile and catch a good one. My preference is to always fish shallow, but there’s too many good fish hanging out in the brush piles.”

McCall says he caught about 15 keepers today and ended up with two deep fish and three shallow fish.

“I’m excited about tomorrow, I just don’t know what the wind is going to do,” says McCall. “The wind is my biggest worry – I don’t know where I’m going to get to fish tomorrow. I’m just gonna get up in the morning and just go.” 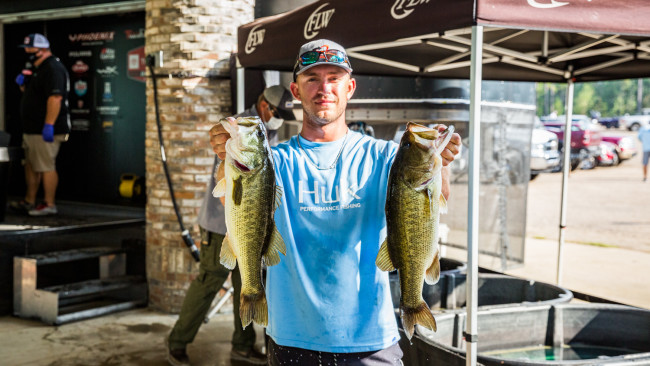 Fishing an interesting pattern with a lot of potential, Blake Schroeder could have a lot to reveal on subsequent days if things hold up.

“I caught two right away, one close to 4 pounds, and then kind of grinded for my limit,” says Schroeder. “I upgraded a couple of times around 2. I probably halve half a dozen areas, but I only really keyed on two areas today.”

Schroeder isn’t fishing deep or shallow, and he says that grass and shad are key to his bite.

“I’m hoping the wind helps me out, I’m looking for the bite to improve actually,” says
Schroeder, who is more than happy with his day-one tally. “I’m around quality, I really just wanted to survive today and catch what I caught today tomorrow.”

A guide on Rayburn for more than 30 years, Kenneth Cates finished second in the Phoenix Bass Fishing League (BFL) Super-Tournament in September and is on track for another good showing.

“The lake fished a lot better today than I expected it to,” says Cates. “The lake is fishing tough, but there’s a group that figures them out every event. Two weeks ago I was on ‘em, and my fish have just stayed put, they’re there.”

“There” happens to be about 45 miles from takeoff, far up the Angelina River, into braided water that is barely mapped. It’s water that is barely possible to get to at the current lake level, but a knowledge of the fishery and a tolerance for skimming over less than 2 feet of water have gotten Cates there and back quite a few times now.

Fishing shallow for current oriented fish, Cates and his co-anglers have been catching plenty of numbers.