Grass is the name of the game so far 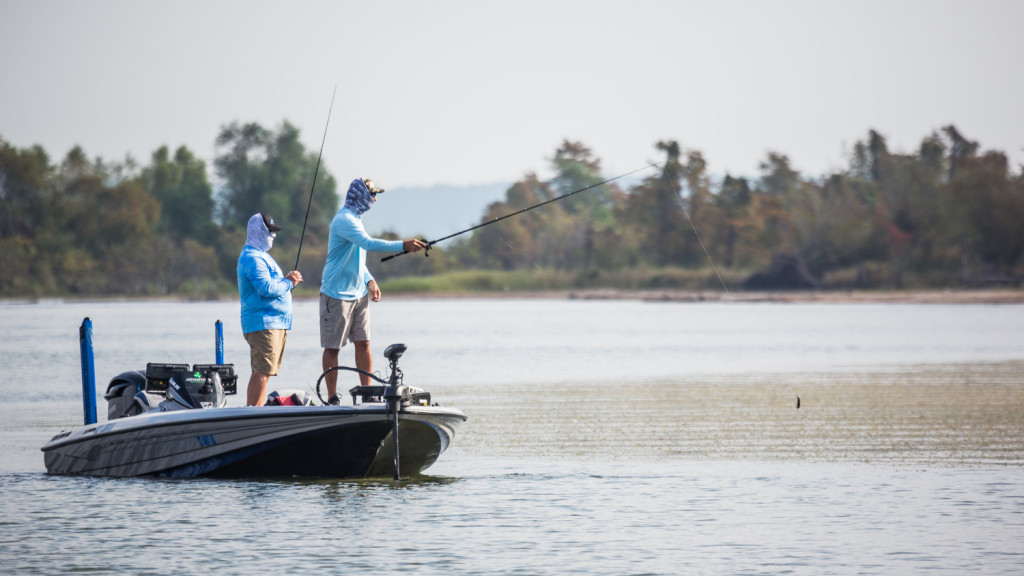 Through two days of competition, it’s looking like the shallow grass bite is the deal in the Toyota Series Southwestern Division event on Sam Rayburn. Leading the way, Blake Schroeder had tallied a pair of 18-pound bags from shallow grass, and the pros behind him aren’t slacking on the grass game either. Heading into the final day, it’s going to be a true shootout for the win, with a Texas-sized kicker a bite away for everyone in the field. 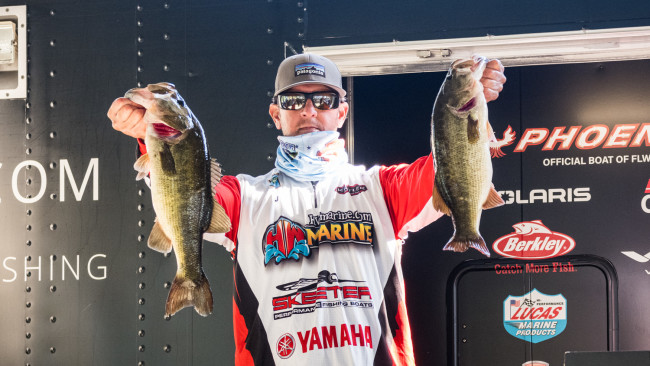 Holding steady in second, Aaron Johnson says he caught about 15 keepers on the day and did it almost entirely around grass.

“The wind helped the bite in some places, but it moved a lot of boats into the areas I was fishing,” says Johnson. “There were some stretches I wasn’t able to get on. But that’s just the way it goes, what Mother Nature gives, Mother Nature also taketh away.”

Johnson isn’t doing anything super special, but he’s got a half dozen good areas and knows what he’s looking for.

“I’m throwing a moving bait, just trying to get a reaction bite,” says Johnson. “Mostly around clumpy grass, not really walls of grass. Some of it is on flats, and some are break lines.”

Just 3 ounces off the lead, Johnson is very in the hunt.

“Today I had two that were probably 4-pound class that I didn’t get to the boat, but that’s going to happen,” says Johnson. “You’ve just got to roll with it and keep on firing. I feel pretty good, I’m just going to go fishing. I’m grateful to be able to do this and have two good days on a lake I really enjoy fishing.” 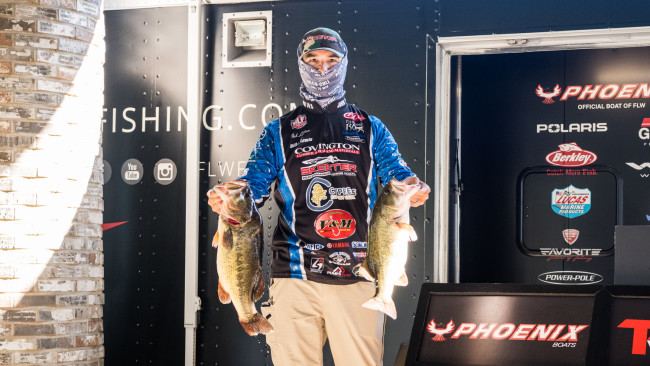 Making a big move up the board on day two, Nick LeBrun is back in his element after a tough sophomore season on the Tackle Warehouse Pro Circuit.

“It felt good, I needed this,” says LeBrun. “It was a tougher year for sure, I got checks in the first two, and then the wheels fell off. It felt good to make good decisions today.”

“Yesterday my co-angler caught a 7-9 behind me, and it was a fish I would not have caught,” says LeBrun. “It revealed to me that the areas I’m fishing, there are fish coming in there. So, I kept that in mind today, and I tried to fish for fish coming in, instead of just fishing for resident fish shallow.”

Putting a 6-pounder and more than 10 keepers in the boat today, LeBrun thinks he’s started to tap into the fall migration, and he’s happy to not be messing with deep stuff.

“I had found some fish offshore, but I can’t get them to bite,” says LeBrun. “I don’t care how good a brush pile looks, if you can’t get bit, the tournament is not based on your screenshots.” 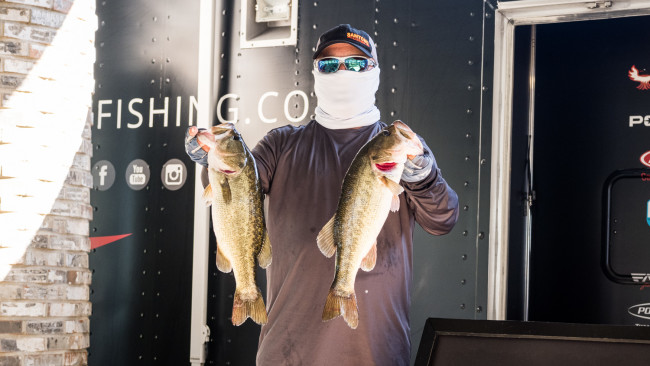 Dropping one place on day two, Chris McCall was impacted by the windy conditions today and never got to mix in deep fish as he did on day one.

“It was a little harder today, the wind took away a lot of places where I wanted to fish,” says McCall, who has won two Series events on Rayburn. “I want wind, but I don’t want a lot of wind. I had to go to some more sheltered places today. I stayed shallow today, there’s wasn’t a way to get out there today. If it gets right, I’ve got a couple brush piles I’d like to hit, but otherwise I want to stay shallow.”

Catching most of his fish in less than 5 to 6 feet today, McCall has been sticking with moving baits and burned another 28 gallons of gas today, despite the windier conditions. Going into the final day, he’s absolutely one of the most concerning names for those ahead of him.

“It feels good,” says McCall of his success. “There are a few really good fishermen on Rayburn that stumbled this week. Being that I haven’t lived here in four years, it feels good to be in the running.” 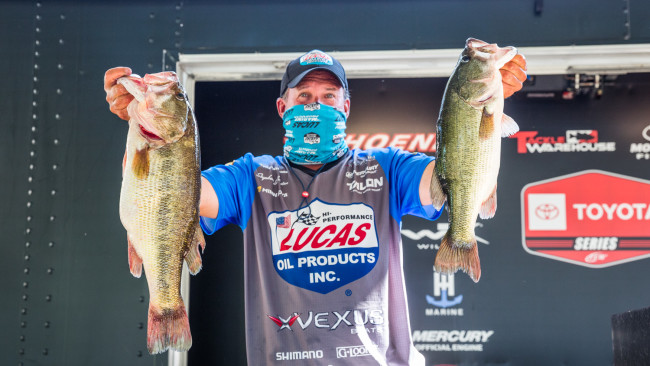 Seemingly always in the running in Texas, Stephen Johnston has rode big bites harder than anyone else in the top five so far.

“I just gambled, I finished fourth in the first one over at Toledo Bend, and in Oklahoma, at Fort Gibson, when the hurricane went though, I had to go back to the house,” says Johnston. “There was no way for me to make the Championship, so I put my head down and tried to swing for the fence and see what I could do.”

Swinging big, Johnston has been mixing it up between offshore and shallow fish.

“I got real lucky yesterday and caught a 6-pounder shallow at 2 o’clock and culled out a 14-incher. In the first hour today I caught that 7-pounder. Other than that, it’s a grind. The big deal here is the pressure, Sam Rayburn is one of the top fisheries in the country, but the pressure just makes it hard.”

Leaning on a Strike King 6XD and a worm out deep, Johnston did what a lot of other anglers avoided today.

“There’s a lot of fish schooling, and there’s a lot of suspended fish, and with those big waves, a lot of times it will push those big balls of shad up onto the flats,” says Johnston. “I was only 10 feet deep, but I was 100 yards away from the grass when I caught that big one this morning.”

Going into tomorrow, one more big bite could set him up really well for a run at his second Toyota Series title.