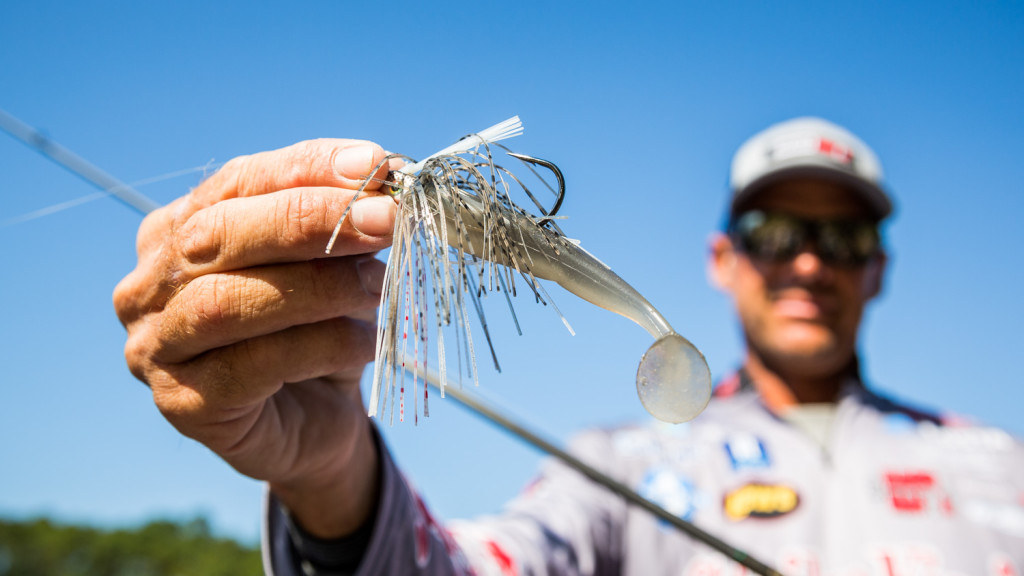 The top finishers in the recent Toyota Series Southwestern Division event on Sam Rayburn caught the lake when the shallow bite was just picking up. Sticking shallow around hydrilla with a wake bait, Aaron Johnson stayed consistent and won the event. Behind Johnson, there was a lot of room for pros to fish to their strengths, though there’s no doubt that shallow eventually won out.

2. Cranking grass like the winner, Blake Schroeder came up just 11 ounces short of the win.

His primary bait was a Strike King Magnum Squarebill in the 4.0 size in green gizzard. Equipping it with No. 2 Owner ST-36 trebles, Schroeder threw it on a 7-foot, 6-inch Falcon Expert with a 7.1:1 gear ratio Shimano Bantam MGL and 20-pound Seaguar InvizX. Schroeder also used a 3/8-ounce Z-Man ChatterBait Jack Hammer in green pumpkin with a matching Big Bite Baits Cane Thumper trailer.

“I was throwing the crankbait around the edges of the grass, where the creek swings, where shad were bunched up from the wind,” he says. “I threw the ChatterBait in the same spots as the crankbait, as well as up on top.”

Schroeder says that his retrieve was important with the crankbait, and he’s burn it along and mix in pauses and other erratic motion when he got close to a grass clump. 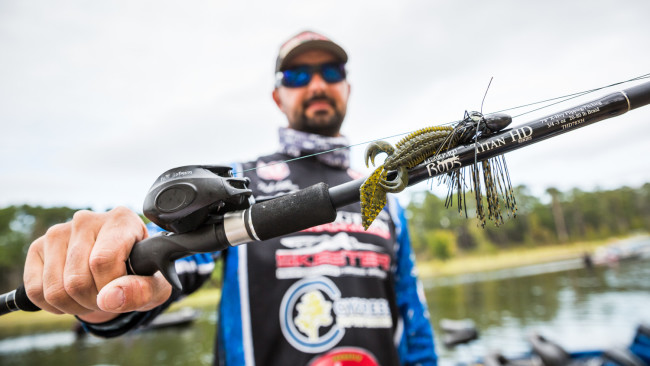 3. Flipping and frogging, Nick LeBrun wrapped up his season with a top 10 to go into the offseason on a high note.

For his flipping, the Louisiana pro stuck with a blue shadow V&M Flat Wild, a 5/0 Hayabusa FPP Straight Worm Hook and a 1 ¼-ounce Elite Tungsten Punch Weight with a matching skirt. For the rest of his setup, LeBrun favored a 7-foot, 8-inch, extra-heavy Fitzgerald Titan HD, a 7:1 gear ratio Fitzgerald Stunner reel and 60-pound-test Sunline XPlasma Asegai braid. For his frog, LeBrun stuck with a SPRO Bronzeye Poppin' Frog in the black widow color.

On day one, co-angler Todd Childs caught a big one behind LeBrun and it clued him in to a slight change he needed to make.

“I had a frogging spot, and I was casting way back, into the pads, and he caught a 7-9 flipping on the edge of the pads,” says LeBrun. “Day two, I went back in that area, and instead of focusing only way deep in the pads, I fished out a little more.”

Frogging out a bit more, LeBrun caught a 6-pounder.

“The bulk of my fish came flipping hydrilla, but that 6-pounder was what got me into the cut,” says LeBrun. 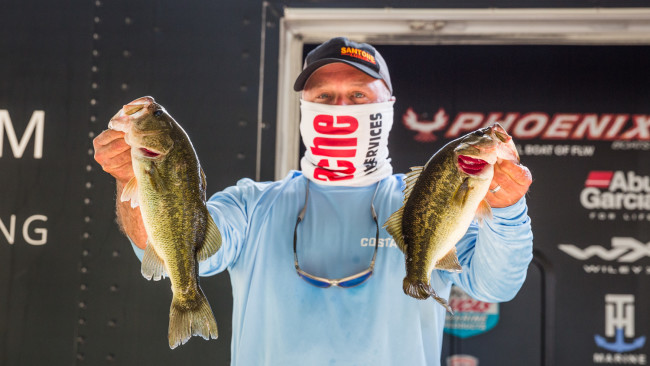 4. Always competitive on Rayburn, Chris McCall caught his shallow fish on a few baits. His primary tool was a 7/16-ounce Santone Chris McCall Rayburn Swim Jig in blue Herren with a pearl Gambler Flappy Daddy. He also used a Bill Lewis Rat-L-Trap and a swimbait.

On the first day, McCall caught a few out of brush, and he used a 5/8-ounce Santone Pro Football Jig in pinto beans and carrots with a Strike King Rage Craw trailer. 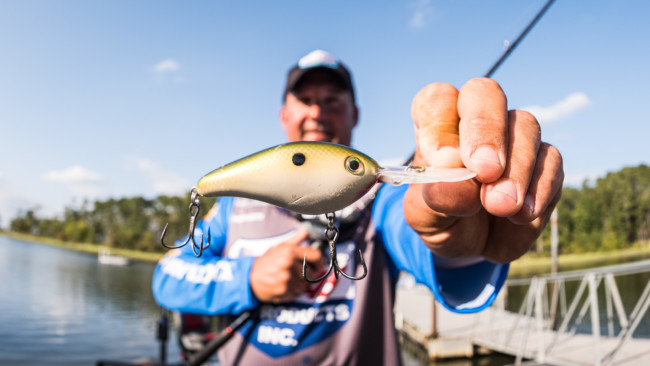 5. Stephen Johnston mixed shallow and deep, but did the bulk of his damage deep and lived there the final day.

“I was just trying to fish with the wind,” says Johnston. “During the fall, a lot of these fish will get off the bank and follow the bait out. These fish go off the grass and just roam with them. I just got on those banks that didn’t have any grass, that had the wind blowing on them, over the years, I‘ve caught them like that before. It’s a goofy deal, people think they’re not biting, but they are, they’re just not where we’re fishing.”

Johnston got a big bite chasing shad on day two, but the winning size never materialized on the final day. 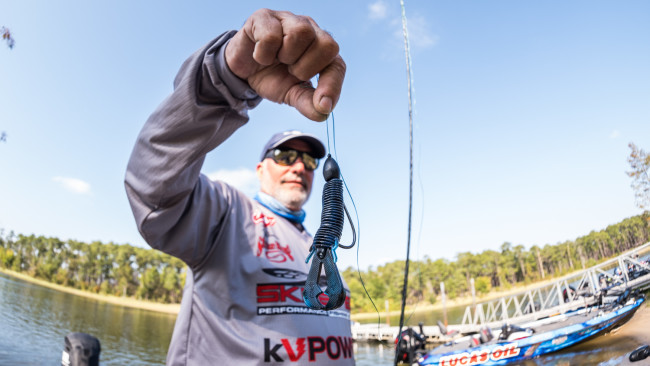 6. Going with what he’s great at, Tim Reneau caught most of his fish flipping a Strike King Punch Bug with a 1 ¼-ounce Strike King Tour Grade Tungsten Weight and 60-pound-test Gamma Torque. His rod was a Power Tackle “The One” 4.5, which is a 7-foot, 8-inch rod with a moderate action.

Reneau also caught some fish on a Strike King Wake Shad and Strike King Hybrid Hunter, both in green gizzard. He tossed both his hard baits on a 7-foot, 6-inch Power Tackle “The One” 03, and used 17-pound Gamma High Performance Copolymer. 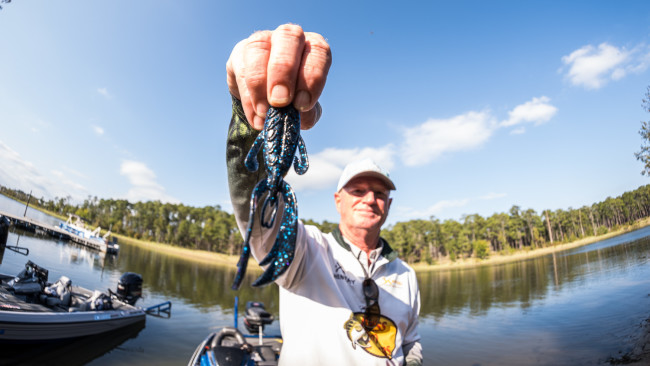 7. Kenneth Cates ran far up the Angelina River and flipped mats and wood for most of his fish. His primary bait was a Big Bite Baits Fighting Frog, but he caught fish on a variety of flipping baits on the week. 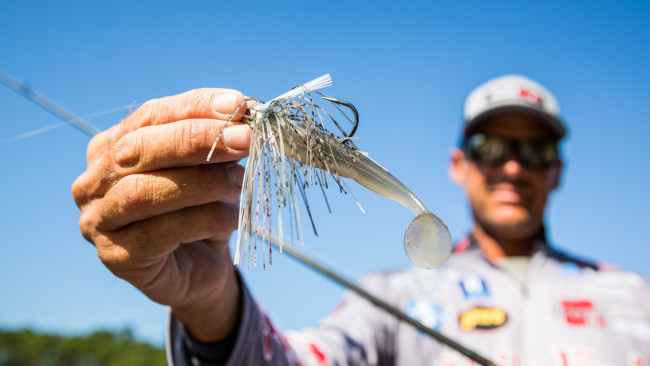 8. Todd Castledine spent the whole event fishing shallow grass, but he didn’t lock anything particular in his hand.

“There was a lot going on, I caught them on a whole bunch of stuff, there really wasn’t one bait,” says Castledine. “I never fished deep the entire tournament. I caught every one of them out of grass.” 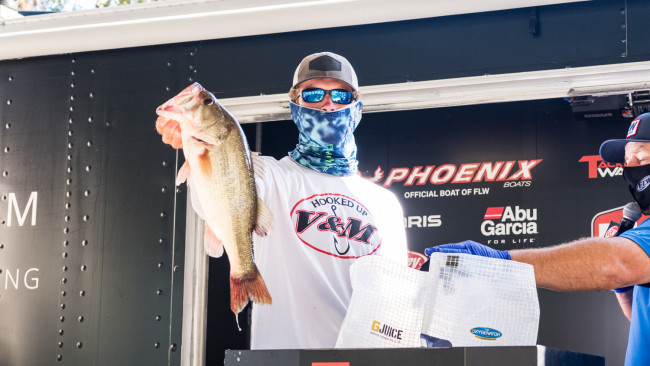 9. Day one saw Cole Moore leading, but his catches ticked off as the week progressed. On day one especially, most of his weight came out of brush on a V&M The Flatline Football Jig tipped with a V&M J-Bug. Outside of the jig, Moore also caught fish in brush on a V&M J-Mag on a 3/8-ounce Texas rig and a Carolina-rigged 4-inch V&M Swamp Hog.

Shallow, around either pads or scattered hydrilla, Moore swapped between a Lucky Craft Gunfish 135, a frog and a black buzzbait. 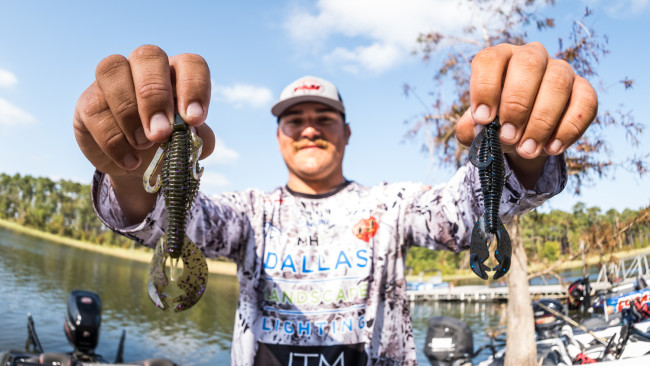 10. Finishing second in the points on the season, Justin Cooper did just one thing at Rayburn.

“I just flipped grass all day, I knew I had to swing for the fences to try to win AOY and just make it to Saturday,” says Cooper. “I had fish out deep, in schools and brush piles, but I just never saw the size in practice. I was mainly focusing on creek bends, where the creek would swing next to the bank and the grass had a real sharp edge.”

Cooper’s flipping setup was pretty simple. Just a V&M RC Craw, a 1-ounce weight, a 4/0 Owner Jungle Flippin’ Hook and 60-pound Sunline FX2. For his rod, he used a custom-built model on a MHX FP-936 blank.