Fishing’s been a little better than advertised so far 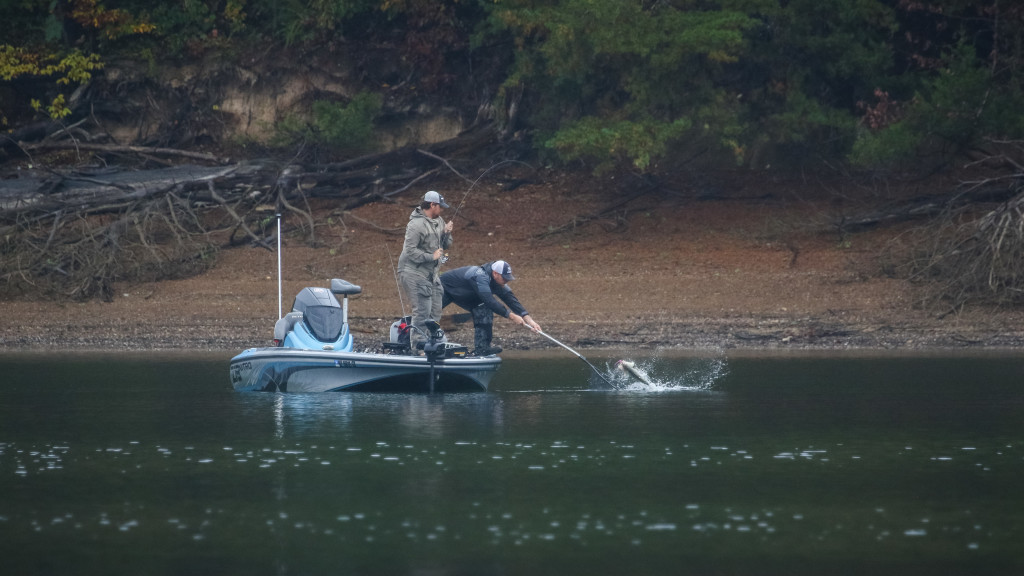 The rain that soaked the region all Wednesday hung around to start the morning of day one of the Toyota Series Central Division finale on Dale Hollow. By midday, though, the spotty rain started to move out and give way to a little sunshine ahead of sharply falling temperatures this evening and into Friday morning.

With the rain came perhaps a little better fishing than many anticipated after a tough practice period for most of the field. We ran into several anglers within the first few hours of fishing who had limits, and by noon, we’d talked to seven boaters with limits ranging from 9 to 13 pounds.

Among them, local Byrdstown, Tenn., boater Blake Smith had a limit and culled to about 12 pounds by 10 o’clock. He’s been running and gunning, working a milk run that hasn’t even included what he considers his best stuff. Smith seems to be in pretty good shape so far.

Likewise, local Scott Stults filled out his limit for close to 11 pounds at about 11:15. He was working one particular area in one of Dale Hollow’s many creeks, slowly picking it apart. His limit-filling fish came not long after Stults turned around to go back over the same stretch of water.

Marshall Deakins had a limit of his own by 11:30 that he says would go about 10 pounds. Daniel Cline and Brody Campbell each reported being up around 12 pounds or better when we ran into them. Chris Gerrein is on track to have as good a day as anyone. He had only three fish for about 11 pounds when we saw him, and filling out that limit could mean a really solid day on a stingy Dale Hollow.

“Stingy” might not actually be the best word for it, though. Patterning out the fish hasn’t been easy for anyone, but there seem to be a lot of techniques and tactics catching some fish right now. Everything from spoons and umbrella rigs to drop-shots and crankbaits have played, and we’ve seen anglers targeting everything from grass to docks to rocky points and brush piles.

Wolf River, as expected, has gotten a ton of traffic so far today. There’s a little bit of stain on the water the further up the river you go, and that’s not been easy to find everywhere on Dale Hollow. Even with all the rain, the lake is incredibly clean, with visibility of up to 20 feet in some places.

Here’s a quick rundown of the other anglers we've seen:

Nick Ratliff – Three keepers for about 6 pounds at 9 o’clock.

Adam Militana – Two in the box for about 4 pounds.

Jacob Wheeler – Three for about 5 pounds.

The prevailing prediction this week is that 11 pounds per day will get an angler inside the cut line to fish Saturday. It’s not easy to string together two quality bags in a row, so that might prove to be a solid guess, but we’re sure to see more than a few bags in the mid-teens today with a bunch more edging into double digits.

Be sure to check out the weigh-in starting live online at 3 p.m. CT to see how it all shakes out on day one at Dale Hollow.