Variety of patterns in play, but a cold front threatens consistency 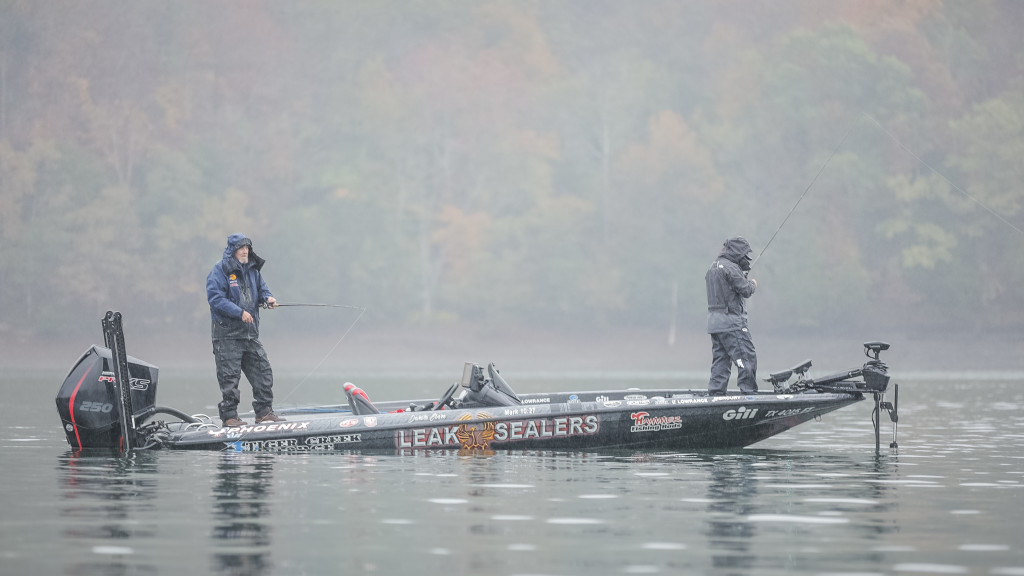 Day one of the Toyota Series Central Division event on Dale Hollow was predictably tough, with few scratching above the 10-pound mark and limits hard to come by. Still, Jonathan Bowling waylaid over 13 pounds for the lead, and the pros behind him have put some actual patterns together. All that is threatened by much colder weather that’s on the way, but it’s nothing the pros in the top 10 haven’t seen before. 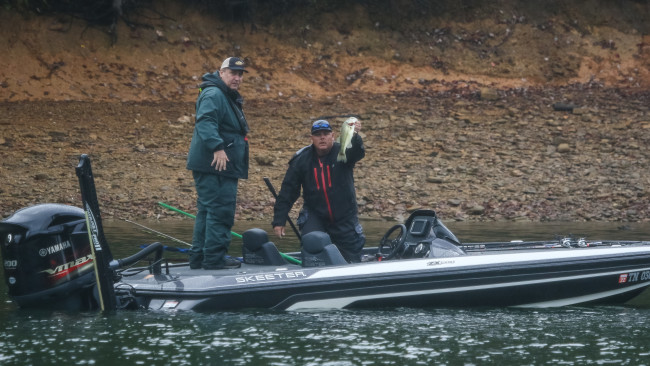 Scott Stults spent his practice time power fishing, mostly cranking and winding a ChatterBait around. He got some bites in practice, but what he found Thursday morning was enough to force him to switch gears entirely.

“I caught three keepers on the first stop and then ran up in the river just a little ways up in Illwill Creek and caught the fourth keeper, and then I ran back down to the main lake and caught No. 5.

From there, Stults decided to stick with his plan and fish slow the rest of the day. His limit-filler came in an area where Stults had found a couple stretches of grass, which he picked apart meticulously until he managed to find the right fish to give him 11-13 for the day.

As for the changing weather, Stults isn’t too worried. He says the cold snap shouldn’t really affect his fish, especially with as slow as he’s fishing. He’s just going to try to replicate his approach on day two and see what happens. 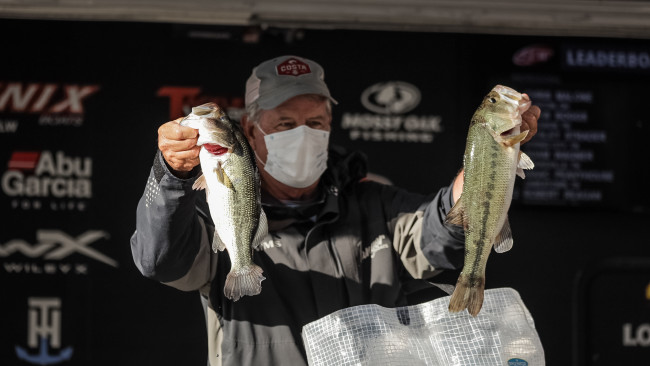 Former Phoenix Bass Fishing League All-American winner Marshall Deakins has been around long enough to know what he knows and know what he doesn’t. What he knows after day one is that he has no idea what’s going to happen tomorrow.

With the approaching cold front, Deakins says he might not get a bite tomorrow, but he was able to spend most of his day practicing after catching some quality fish early, looking for new stuff to fish on day two.

As for today, Deakins caught most of his fish working a worm around brush piles, save for a couple spotted bass he pulled from a deep tree. He wanted to work grass in the mid-lake area, but the wind was blowing too hard to make that a viable pattern for the 68-year-old Dunlap, Tenn., pro.

“If the wind doesn’t blow [Friday], I think I can catch them out there in that grass,” he says. “With thew way it was today, you couldn’t fish it. 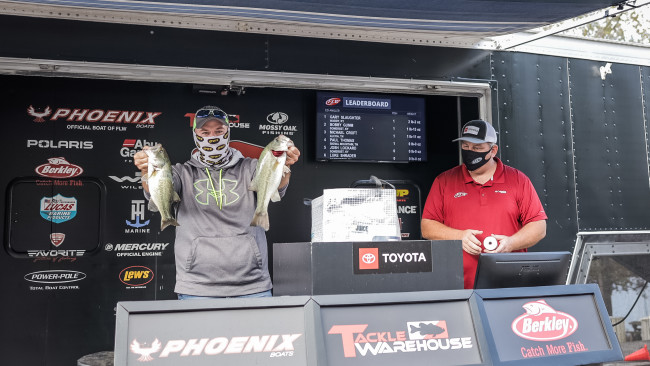 Blake Smith is one of the true locals in this tournament, and he’s certainly fishing like it.

En route to 11-9 for the day, Smith targeted multiple schools he was able to locate in practice. All of them are good – with 15 to 30 fish in each, he says – but the one he stopped on first thing is the school he’s most excited – and most worried – about.

“I feel good about the first place I went to as long as it doesn’t get too beat up. I had two guys sit and watch me, so I’m always kind of worried about that,” he says. “I’ve been going back to it.”

Even if someone else does get on his best school, Smith feels good about his others. They’re grouped up in fairly shallow water, and he’s done well picking them off with a crankbait before dragging soft plastics to get the schools fired back up when they slack off.

“Most of the fish I’m finding are just schooling resident fish,” he explains. “They just group up certain times of the year on ditches and channel swings next to flats where they can group up on little isolated stuff on the bottom.

“Being a local living here just a couple miles from the lake, I just know where those places are.”

Smith checked his schools throughout the day today, and he’s excited about what he saw.

“We looked at two of them (schools) on the way back to make sure they’re still there and they’re set up just as pretty as you please.” 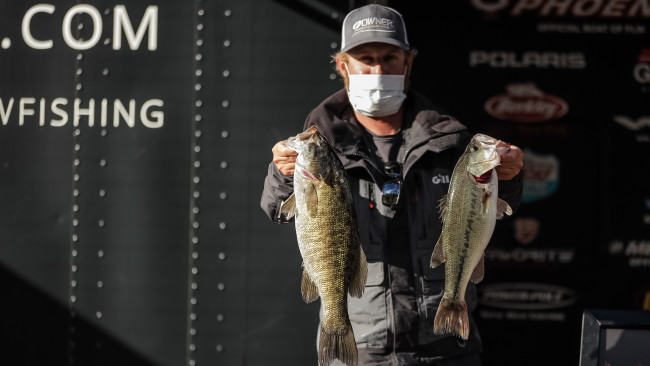 Nobody has more fun fishing than Dakota Ebare, which probably explains why he fishes more circuits and more tournaments in a given year than just about anyone else. Even on a stingy Dale Hollow this week, Ebare is having a lot of fun.

“This place is so much fun,” he says. “It’s a blast just catching those smallmouths. The problem is the smallmouth are so distracting here because you can just smash them.”

With possession limits that allow for just one keeper smallmouth under 16 inches and one over 21, it’s easy to get caught up in chasing 3- and 4-pound smallies that ultimately will never make it to the weigh-in stage.

As such, Ebare has taken to some tactics – which he chose to remain tight-lipped about for now – that have produced some big largemouth. The proof: He’s sitting in fifth place after weighing in just four fish – three of them largemouth.

“I had the bites I needed; I just lost a few,” he says. “I really wasn’t too happy with my decision making today. I kind of figured something out yesterday that I knew I could get a limit doing it and thought I could catch some good ones, too. I had some other things I wanted to do, and I wasted a lot of time doing that today.”

Ebare says the coldest weather of practice (Sunday) also produced the best fishing, so he’s feeling good about how things are setting up for Friday. And after realizing the error of his ways, Ebare will be even more focused on his game plan.

That’s a dangerous proposition for the rest of the field.