Still tough going for the pros on top 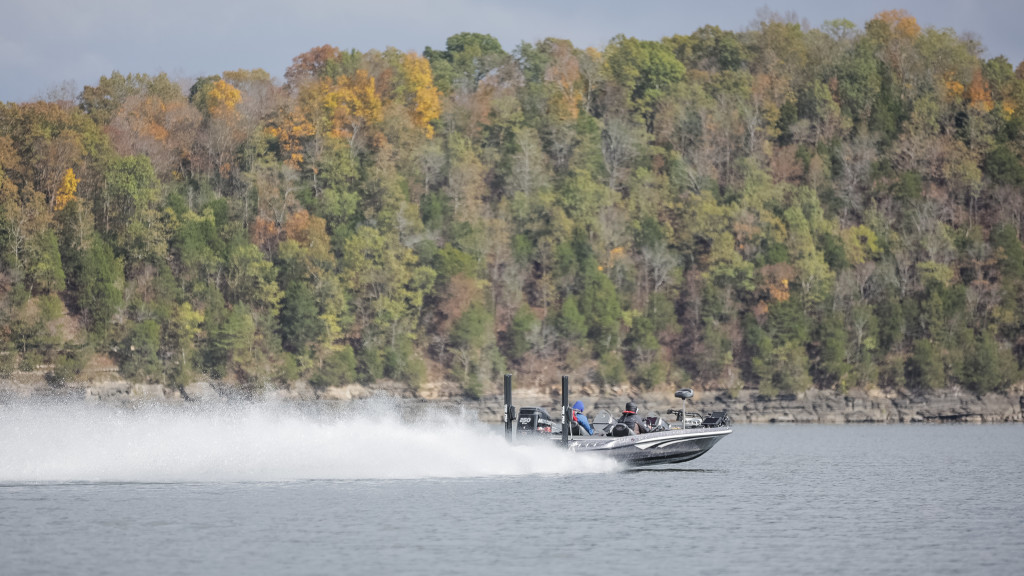 Dale Hollow is fishing tough. That’s about the only constant across the field in the Toyota Series Central Division finale. Everyone in the top 10 has made it to this point by finding a way to battle the difficult conditions and tricky timing, and many have done that extremely well.

Only three anglers in the top 10 weighed limits both days one and two. Two of those anglers sit atop the leaderboard, though the top five is still fairly tight, all things considered.

Here’s a look at how the rest of the top five have caught their fish to this point and what’s ahead for those anglers on Championship Saturday. 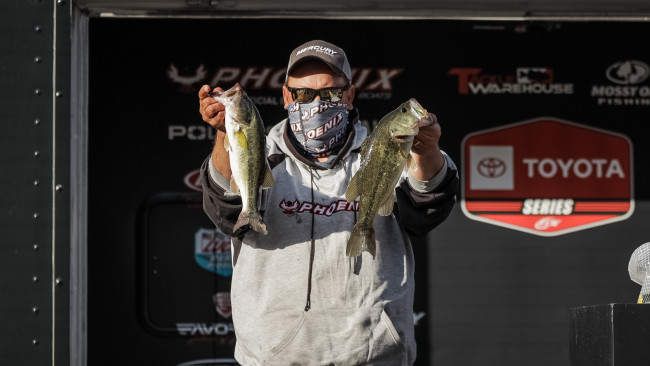 Like leader Blake Smith, Chris Malone has made his money this week in a specific area. He’s poked around some other spots, but his primary area has done most of the damage.

“I’m fishing one creek and pretty much dying in that creek,” he says. “There’s not as much of the good ones, but there are a bunch of fish in it. I just hope there’s five more for tomorrow.”

Malone’s spot is in the mid-lake area, and it’s got enough grass to attract some quality fish. Those fish aren’t schooling up, but they’re chasing bait up shallow, and Malone is using a jig to grab their attention.

The only question is what the postfrontal conditions will do to his fish.

“It was a touch tougher,” he says of the cold front. “My water cooled down about 5 degrees where I’m fishing so shallow. It was a grind. I did run into one area of the lake and caught a couple out of it, and I think I definitely need to put it in a rotation tomorrow and see what happens.” 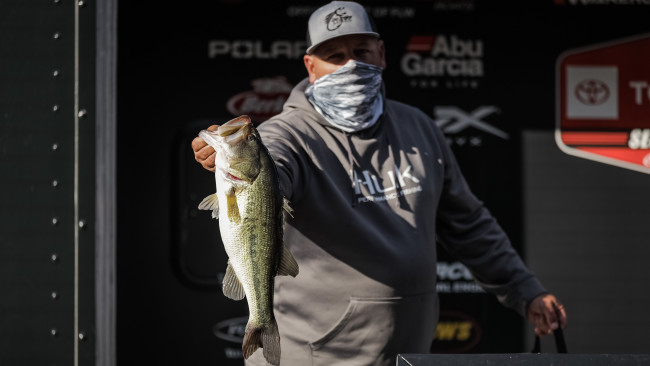 Bass fishing is all about making adjustments. That’s awfully hard to do the very first morning of a tournament, but that’s what’s gotten Scott Stults to this point.

Spending practice winding and cranking, Stults expected to take a power fishing approach to this tournament. Instead, he caught a few fish early on day one fishing slow with a soft plastic, and so he’s stuck with that approach since.

“I stayed in the grass both days and hadn’t really practiced that way,” he says. “It just turned out that way yesterday morning. I went back to that same place and caught one early [today] and missed a few fish. My co-angler caught some good smallmouth. We had a good day.”

Despite weighing in just two fish, it really was a good day for the Jamestown, Tenn., boater, who weighed 7-11 to enter day three in third place. It could have been a whole lot better, though, as Stults says he missed three or four fish he should have caught.

Still, Stults didn’t stress about it, thanks to some sage advice from his son.

“My son told me this morning to ‘just go fishing,’” he explains. “Don’t stress out. Just go fishing. And that’s what I did all day.”

Windy conditions made it tougher to fish on day two, but the sunshine in the forecast should help his shallow grass bite, and Stults plans to downsize with even more finesse tactics to take advantage of every bite he can get on an ultra-stingy fishery. 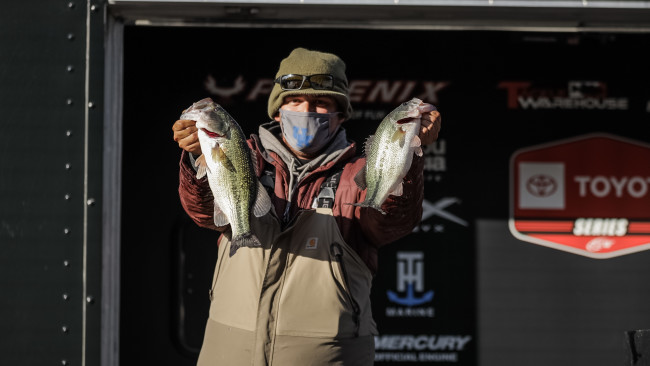 Nick Ratliff is one of the few true locals fishing on the final day. So far, his local knowledge has been crucial, but some bad luck has resulted in key lost fish and a fourth-place standing heading into Saturday.

Ratliff has been on a rotation of brush piles, dock cables and pilings. Yesterday, he weighed in four fish – mostly on brush – but he admits his timing was a little off. He also had two good fish come unbuttoned Thursday, which happened again today.

Still, he’s not unhappy with his performance to this point. Ratliff is fishing for a shot at a Toyota Series Championship berth on Lake Cumberland in a little over a month.

“I pulled off two yesterday and I pulled off two today,” he says. “It is what it is. My main thing is, yes, I want to win, but I’m trying to make Cumberland because I fish there as much or more than I fish here, and I knew I needed a really good week.”

He’s definitely had that, thanks in part to downsizing to a drop-shot all week to get as many bites as possible. Tomorrow, though, he has other ideas.

“Tomorrow, with the conditions – second-day postfrontal – it’s not great, but It can open things up. I might fish a little bit bigger tomorrow because the worst you can do is 10th.”

Chasing after a big bite might be just what Ratliff needs, especially if it means a giant smallmouth that’s outside the slot limit of 16 to 21 inches.

“The problem with my brush bites is there’s so many smallmouth,” he says. “I stopped on one that’s traditionally a really good largemouth pile on the way back today. I stopped there with 10 minutes left and it took off swimming and I knew it was the one I needed. It was a 20 1/2-inch smallmouth.

“There is the chance I get an over tomorrow. I’ve not caught one in the last two weeks, so I know I’m due for one.” 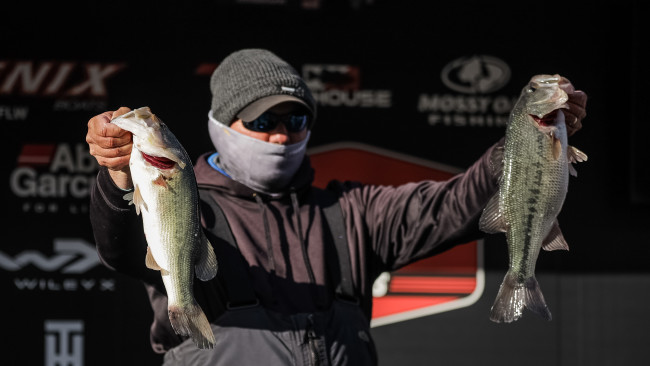 Adam Wagner has been consistent so far (9-4 on day one and 9-1 on day two), but he’s maintained that consistency fishing two entirely different ways. On day one, it took fishing ultra-shallow in about 2 feet of water to scrounge up four good ones. Today, it was a combination of luck, keen observation and perseverance.

“Today, I started out shallow where I caught them yesterday,” he says. “I came out of there and started running some grass, and I was running into a pocket that’s got a 50-foot ditch in it. I just happened to see the motherlode on the graph in 50 foot of water and a school of shad with them.”

Wagner immediately dropped on the school and caught a 4-pounder. Fifteen minutes later, he caught his second keeper. It took another two hours to coax a third keeper to bite.

Those three fish were all Wagner was able to weigh today, but he isn’t discouraged. He’s going right back to that school tomorrow morning to see if he can’t start his day off on the right foot.

He may not have to if that mega-school decides to cooperate. Wagner just doesn’t know what that will take.

“It’s just that October funk,” he adds. “They’re just hard to catch right now. I just think it’s fishing pressure and that the water is so clear. I don’t know. I can’t figure it out.”