Huff Ahead on Table Rock

College phenom sets the pace on his home waters 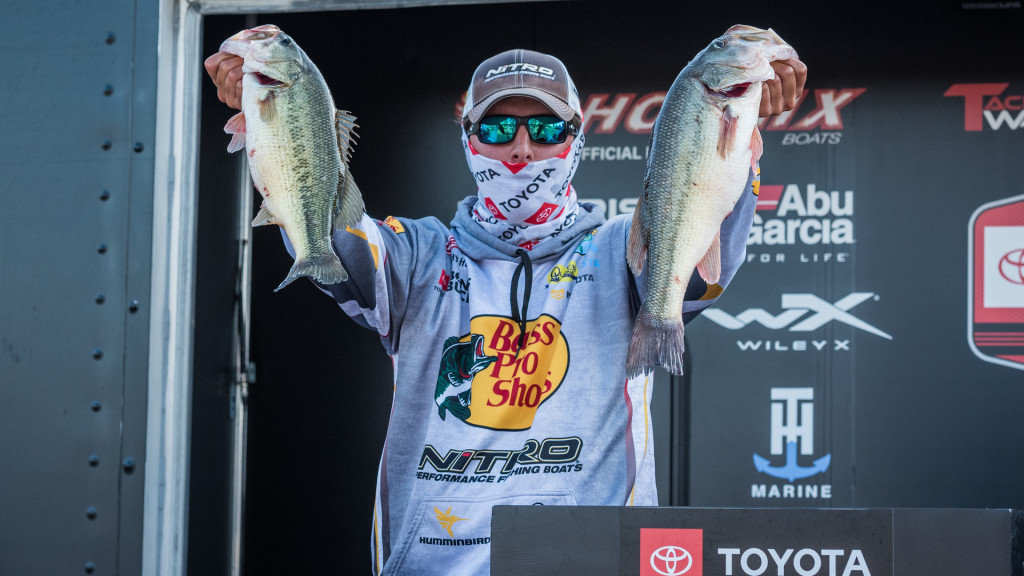 It only took the Ava, Mo., pro about four hours of practice on Table Rock for the final Toyota Series Plains Division to know how he was going to spend his tournament – fishing deep for suspended bass. He executed his game plan flawlessly to the tune of 16 pounds, 15 ounces after day one to take a 2-10 lead over Spencer Shuffield and Corey Cook, who are tied for second. 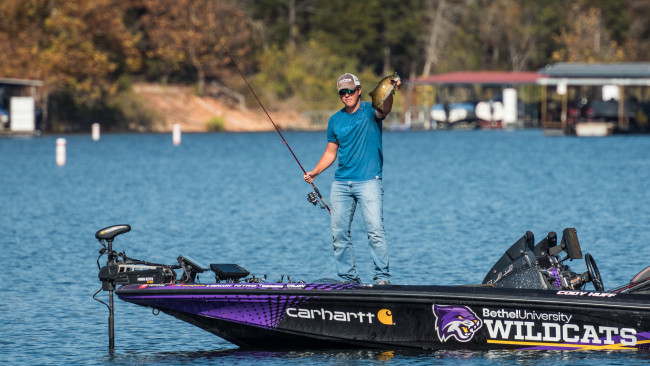 Huff spends a fair amount of time on Table Rock throughout the year guiding on the famed Ozark fishery in the summer and winter, so when dealt with high, cooling water he didn’t hit the panic button. Sure, he wasn’t certain how things would go, but catching a few fish over 3 pounds in practice suspended over deeper water was all he needed to be right in his wheelhouse – the same wheelhouse that got him a Toyota Series title on Toledo Bend back in February.

“When the fishing’s this tough you’ve got to take every pound you can get,” Huff says. “Every pound you catch today is one you don’t need to catch tomorrow. I didn’t die today. I got really, really lucky today and pretty much really only had to fish two places. I found seven or eight in practice that had fish on them and all my weight today pretty much came off my first two places. I actually culled once on my way back, and after that said, ‘well that’s enough of that.’”

In an event where limits were hard to find, Huff had no trouble catching fish that meet the 15-inch minimum on the lake. In fact, he caught around 25 keepers to get the weight he had. So, catching may not be an issue, but he says the size is far from a guarantee.

“It seems like you’re beating a dead horse,” the Bethel University angler says. “You’re just going and going and going and doing the same stuff repeatedly, then all of the sudden you run into one of those groups you’re looking for and catch a few nice ones in a row. Until then you kind of look like a lost sheep out there wandering around.”

While it may look like he’s “wandering around,” the fact of the matter is that he’s keying on bait. Once he finds the shad, the bass aren’t far behind.

“It all revolves around the shad right now,” he adds. “It just depends on how much shad is in an area. If there’s a bunch of shad, they’ll keep swimming and eating. It seems like if there’s a smaller number of shad, it’s a little easier to handle. But you’ve got to be around the bait. If I’m not around them, I don’t get bit at all.”

Looking ahead, stable, warm weather is in the forecast for the next two days and that may play to Huff’s favor. While fall is usually a time when things change daily, Huff doesn’t seem too concerned about his fish are going anywhere soon.

“Weather is no big deal really, unless it really blows, then things get tough,” says the 23-year-old pro. “Sunshine and light wind is ideal. It’s not quite ideal for a lot of other patterns, but it’s ideal for this one.” 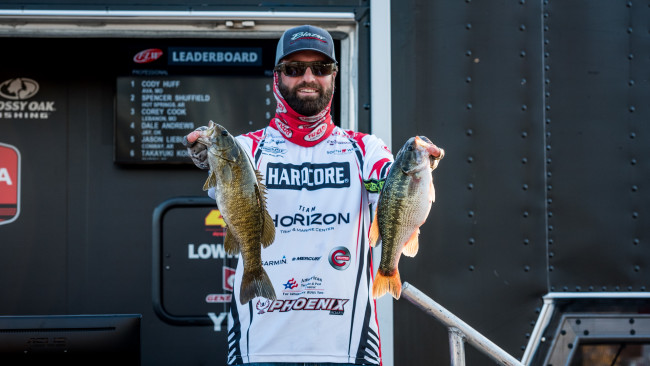 Suspended bass, spinning rods, electronics and Tackle Warehouse Pro Circuit superstar Spencer Shuffield go together like peanut butter, jelly, bread and your favorite chips. So, it’s no shock to see him with his name in the hat for the title this week.

Shuffield doesn’t fish Table Rock all too often, despite finishing second in the Pro Circuit event on the White River impoundment back in March of 2012, but he can’t help it when things line up perfectly for the way he likes to fish.

“I’ve fished this place two or three times as a co-angler and only once as a pro when I finished second catching them on a A-rig,” Shuffield says. “I only come up here for a tournament. I don’t ever come up here fun fishing.

“But I just love fishing like this. Anytime I can use my electronics and use spinning tackle it’s what I love to do. It’s more fun for me.”

With cold rains last week raising the lake up about 4 feet and the lake currently drawn down about 6 inches, the fish seem to be in a weird funk. That isn’t the case for Shuffield, who is catching them in a similar manner to Huff. In fact, Shuffield may have been the only guy in the field happy with how the lake set up this week.

“I knew when I saw the [Phoenix Bass Fishing League] Regional weights were as tough as they were up here, I knew it was going to set up perfect,” he says. “It meant the fish aren’t catchable. They aren’t on bottom and they’re not up on the bank, so that means they’re going to be suspended and that’s exactly where they are at. They’re everywhere.”

Shuffield got the ball rolling this morning by starting on an area he thought he could catch a few keepers and wound up boxing two 3-pound smallmouths. He hopped around “junk fishing” to put another keeper in the boat by 11:30 a.m. That’s when he decided to roll to the juice.

“I ran up to the area I’ve been catching them and caught three good ones in about 20 minutes,” he adds. “I caught several more 2 ½-pounders just jacking around looking for new water, so it was a good day.

As if he’s not dialed enough, Shuffield actually has a secondary pattern of running boat docks that he says is “really impressive.” He caught a 12 ½-pound limit off that program this afternoon, so things are going in the right direction for the Arkansas pro. He’s confident in what he’s doing and likes his odds moving forward.

“The possibility of catching a big sack is there because I could have a day like I did today and catch a 5-pound largemouth, which I did the second day of practice, so you can catch a big largemouth doing it. But more than likely I’m going to be at that steady 12-14 pounds.” 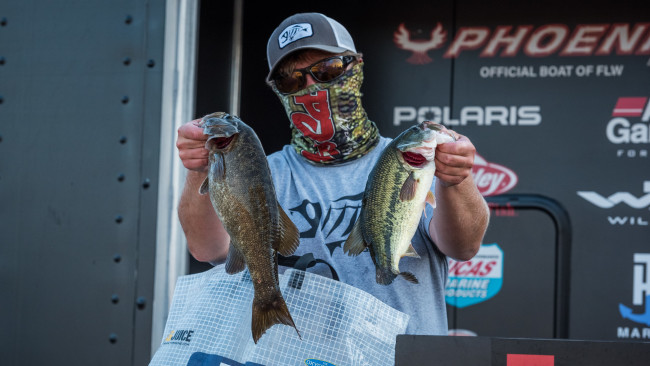 Momentum is on the side of Corey Cook, who is fresh off his Toyota Series win on Lake of the Ozarks a month ago. Running off local knowhow and burning plenty of gas, Cook is utilizing as much of Table Rock as he can and looking to grab his second title of the season.

“It is really tough out there,” Cook says. “I think I only got six keeper bites. But I had a really good practice and thought I could catch 10 to 12 keepers, so today was really tough.”

Cook is mixing in some shallow and deep stuff throughout his day, but says his approach is pretty straightforward.

Tomorrow, Cook looks to run the same program but will likely explore some new territory.

“I like the stability [of the weather],” he says. “I like that it’s going to be sunny and warm all week. It should keep the fishing OK for what I’m doing.” 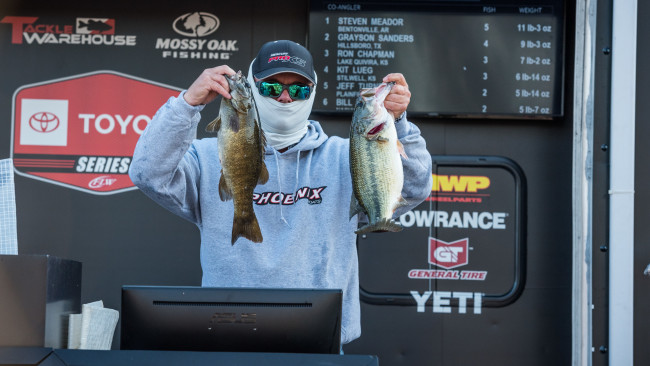 Dale Andrews has been to Table Rock once, which happened to be during last spring’s Toyota Series event on this pond. He finished 32nd then and is looking to greatly improve on that this week.

“I came up here last week and the practice was really good; the fish bit really good,” says Andrews. “I had an 18-pound day in practice, so I was excited about it. I went up and checked those fish yesterday and in 30 minutes had three or four bites. Today I went up there and never had a fish by 11:30.”

Andrews pulled the plug after that and went “junk fishing” to assemble his 14-pound limit. He’s hopeful the pattern he’s running now can go from plan B to plan A for the rest of the event.

“In the fall things change so much and so fast, I really don’t know what will happen,” he says. “I think I got a really good pattern now. I think I can catch them tomorrow.” 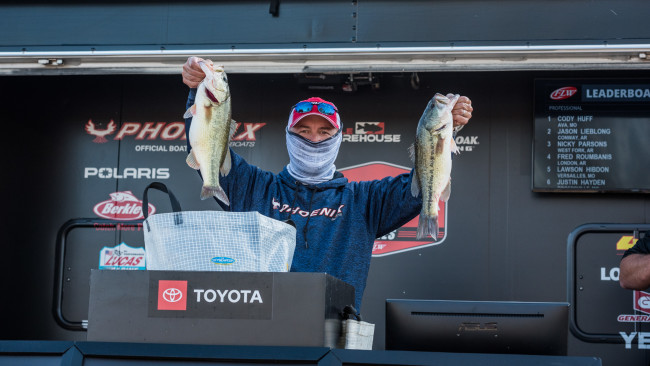 Following the pattern of previous Toyota Series winners from 2020 staying hot, Jason Lieblong is looking to add more hardware to his mantle and possibly a Strike King Angler of the Year title for the Plains Division if he keeps things going.

Lieblong isn’t a fan of clear water, couple that with his prowess in rivers, and it was an obvious choice for him in terms of where to fish this week.

“I’m a river fisherman and that’s the type of stuff I like to do,” Lieblong says. “I was excited when I saw the forecast and the rain coming before this event. I was like ‘we’re going to get some color, thank goodness.’”

Making a long run upriver, Lieblong isn’t wasting much time when he gets to his primary area.

“I just put the trolling motor down and do circles,” the Arkansas pro says. “I have about three spots, so I fish one, pick up and move a ¼ mile and let it rest and then come back. I just keep doing that back and forth.”

Lieblong is also mindful of how tough it is to get keeper bites, so after he caught his fifth fish he left his areas alone.

“I went to try and find new stuff after that and then caught another keeper and ended up culling one, so that worked out well,” he says. “I told my co-angler after I caught my fifth that I needed to leave that area alone because it’s a tough bite and there’s not a lot of areas like that.”

The only worry Lieblong has is the amount of traffic where he’s fishing both from locals and competitors. He knows how good his area is and he knows it’s his best chance at a strong finish.

“I just need to go up there and chunk and wind and see what happens.” 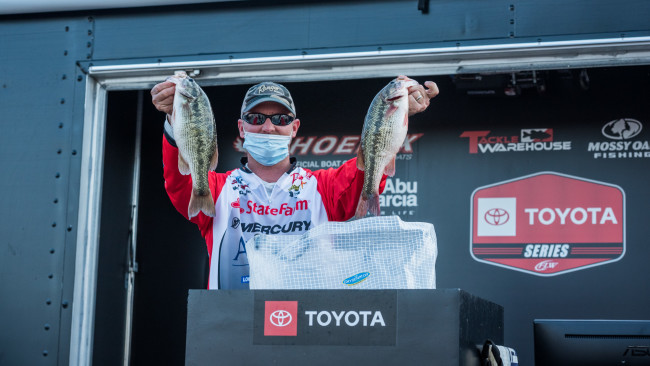 Anytime there’s a major tournament in the Ozarks you can almost bet that Steven Meador is going to be catching fish from the back of the boat. The Bentonville, Ark., co-angler caught the only limit of the day weighing 11 pounds, 3 ounces to take a 2-pound lead over second heading into Friday’s cut round.

No doubt things are tough on Table Rock right now, but Meador’s experience on Ozark fisheries is really helping him lead the charge.

“I love to be offshore; I know how to catch those fish. You just need to get around them and they’re going to bite.”