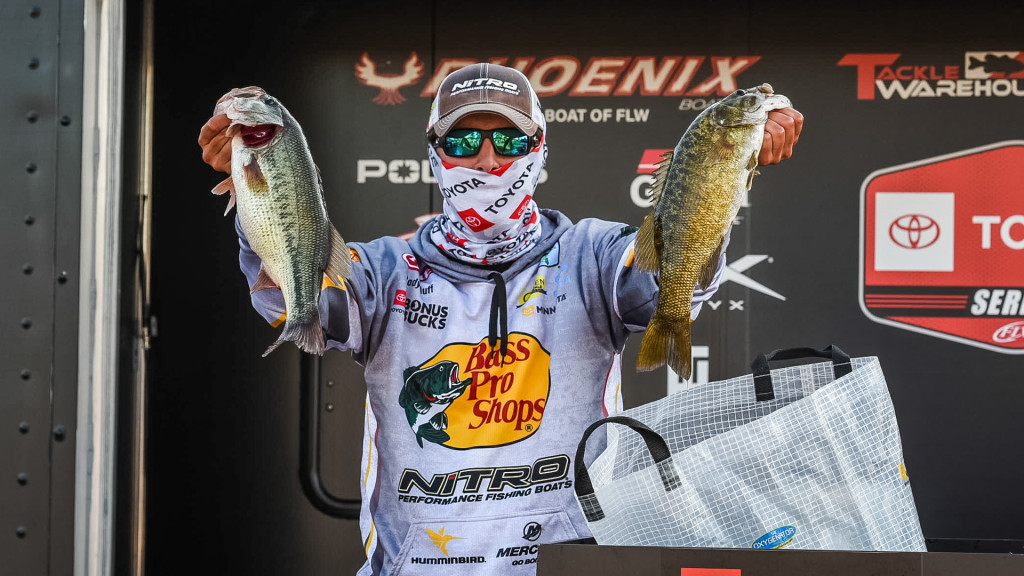 Though his weight dropped 3 pounds from yesterday, Cody Huff is still in control on Table Rock in the final Toyota Series Plains Division event of the season. Weighing 13 pounds, 15 ounces today to add to his 16-15 from day one, Huff stands at 30-14 overall, and just 1-3 ahead of red-hot Corey Cook.

Despite his lead shrinking and slightly tougher fishing on day two, Huff didn’t waste much time getting a limit in the boat.

“I think they bite in the morning pretty good and I was just in an area that had a bunch of fish,” Huff says. “I had a limit by like 8:15. I didn’t catch as many fish today, though. I still caught probably 15 keepers, but some of the groups I had found, I went back to see if they were there and they were kind of gone. But I caught ‘em in the same little areas I did yesterday.”

Sticking to the mid- to lower-portion of Table Rock, Huff points out that despite nearly identical conditions to day one, the fish today weren’t set up quite as good today as they were on day one. 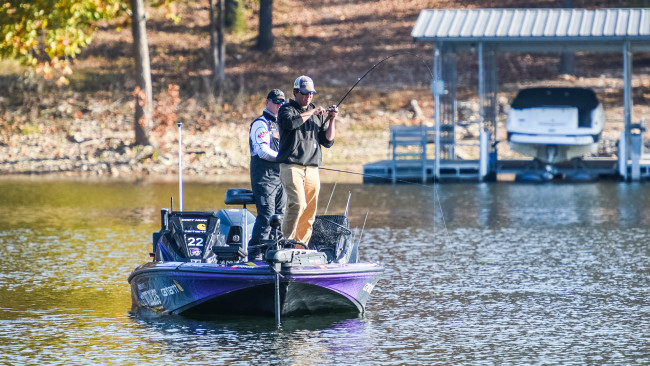 Huff is essentially fishing where most anglers won’t – in the middle of pockets and creeks over deep water. Using his electronics to stay near both bass and shad, the Bethel University angler is in essence doing exactly what he did back on Toledo Bend when he won the Toyota Series Southwestern Division event back in February of this year.

The difference this time, however, is that instead of leaning on a jigging spoon, Huff had to adjust to get bigger bites.

“This week I had a little more success on an ice jig, a Rapala Jigging Rap,” says Huff. “That’s what all my big fish have come on. The first day I caught a limit on a spoon and they weighed like 12 pounds, and I picked that ice jig up and I don’t know why, but it seemed to trick a few more of those big ones into biting.”

At just 23 years old, Huff has a bright future ahead of him in his young fishing career. Even though he’s already won at the Toyota Series level once this year, he’s got his eyes set on grabbing another title close to home with friends and family to watch. Plus, it’d be a great way to keep adding to a phenomenal 2020 season.

“I guess everybody else is down about this year, but I’m just kind of rolling with it,” Huff says of winning the Bassmaster College Series event on Toledo Bend and then the Toyota Series a week later. “I’m just going fishing, man.

“This week I’m getting to fish against guys that I look up to and have kicked my butt on this lake since I was a little kid. This is actually the second time I led one of these on Table Rock. Three or four years ago I had the lead after day one and ended up just bombing on day two. So, I’m looking for a little revenge on that and it means a lot to win at home.” 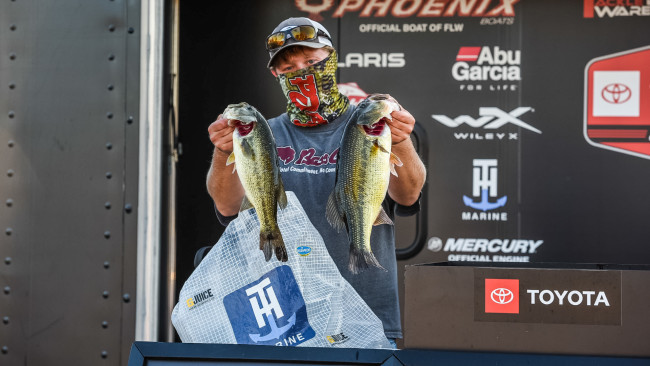 If there’s one guy in the top 10 with a good chance to rain on Huff’s campaign for two wins in a season, it’s Corey Cook simply because he’s also looking for his second win.

Thus far Cook has been the most consistent with solid bags weighing 14-5 on day one and 15-6 today to have him in the hunt for his second win in a row after he won the Plains Division event on Lake of the Ozarks a month ago.

Targeting docks all over the lake, Cook ran up the White River today and things went mostly to plan.

“It went pretty good, I had planned on starting on some stuff I fished yesterday and caught the bulk of my weight just to get a start and didn’t catch anything,” Cook says. “I ran up [the White River] and when I got there it was on. I actually lost a big one that I hope doesn’t come back to haunt me, but he’s still up there swimming, so hopefully I can catch him tomorrow.”

While his weights have been impressive, Cook says that it’s not as easy as pulling up to a dock, pitching a jig to it and catching a bass.

“A lot of places that are normally pretty good, aren’t,” the Missouri pro says. “So you just got to hopscotch through them and see what’s good and what’s not. Some of the places where I got bit in practice I haven’t been bit on yet. So you just got to run new water. It’s a slow process with the dock thing, but that’s just how it is.”

Cook has some areas he hasn’t fished yet that he thinks can produce tomorrow along with the areas he fished today due to the amount of bait near them. So, he’s got plenty in the tank to make another run at a win and couldn’t be happier about having the opportunity to do so.

“I was hoping all day that I’d have enough to make the cut because I was excited to get back out tomorrow.” 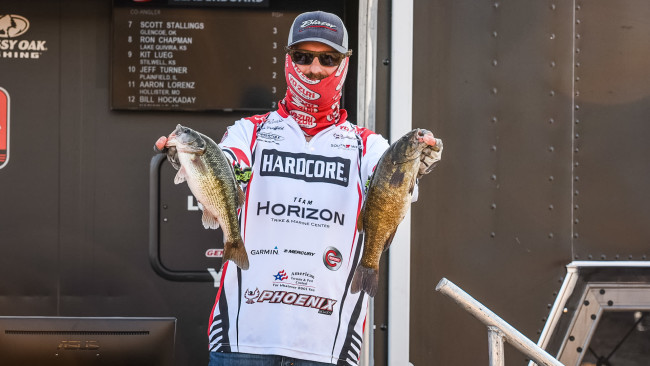 Coming into today Shuffield was confident he could catch 12 to 14 pounds easily. He ended up on the low side of that today and had anything but an easy time of it.

The Tackle Warehouse Pro Circuit pro had just two keepers by 11:30 this morning running his suspended bass pattern, which is similar to Huff's program. He was still around fish, but they were set up completely differently.

“It seemed like they were a lot deeper today,” Shuffield says. “Yesterday most of the fish were in that 28- to 35-foot range and would only be down 18-22 feet, something like that. I could pitch to them and get my bait right in front of them quick, they’d see it, chase it to the bottom and you’d pick up or shake it a couple times and they’d get it. Today, they were out in 35-45 feet and you’d pitch in front of them and they’d turn and start swimming away, not because they saw your bait but it was just the way they were acting.

“It was just frustrating. They didn’t bite today, either. So many of them I’d drop to them and they’d go right to it and never touch it or barely tick it real lightly. You’d think it was a bluegill or little one, but I’m sitting there seeing them on LiveScope and can tell they are good fish.”

Fortunately for Shuffield, he has a secondary pattern of running docks and eventually he bailed on his main deal to run to a waypoint he marked yesterday.

“I marked one dock yesterday afternoon and forgot I even did it,” Shuffield notes. “Obviously I had some bites off it, so I pulled up to it and caught six keepers off it and that’s the only dock I fished. I caught a 2 ½-pound smallmouth off it and like 15 came up with it.”

Shuffield points out there is a small bite window that happens from 12:30 to 2 o’clock, so he’s going to start his morning near the dam where he’s caught some 3-pound smallies this week and then make sure he’s up near his juice for primetime.

The Arkansas pro has a phenomenal season full of top 10s, but he’s hungry for a win. He knows it’ll take a miracle tomorrow for that to happen, but he’s up for the challenge.

“I’m going to have to have a miraculous day to win,” Shuffield says of Saturday. “I’ll need to catch 17 or 18 pounds to win and need to have three of them 4-pound smallmouth and a couple 3-pound spots, but it’s possible.” 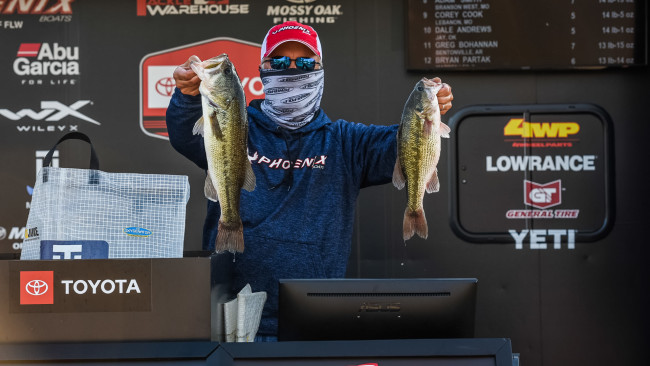 The offshore bite may be leading the event, but Jason Lieblong is staying true to his roots of grinding shallow up a river to secure his top-10 finish and a shot at his second Series win of 2020.

“Yesterday was decent, today was a bit more of a grind,” says the Arkansas pro. “I didn’t catch as many small ones and I just kept chunking and winding and finally got a limit by noon. I fished some new water that I seen in practice, but didn’t fish, and caught a couple out of it and then went to another area where I caught a good one yesterday and culled two from there.”

Running far up the James River, Lieblong echoes the fact the bite wasn’t as good today despite not seeing near as many boats around him as he did yesterday.

Lieblong loves fishing rivers and had planned to do that before he even got to Table Rock this week in order to try and escape the gin-clear water of the main basin of the lake. Though his water is clearing up some, his shallow bite is still hanging on.

“I’m just fishing stupid shallow,” he says. “I mean, my boat is probably sitting in 3 feet of water. But some of the fish are in a foot of water. All I can do is go fishing tomorrow.” 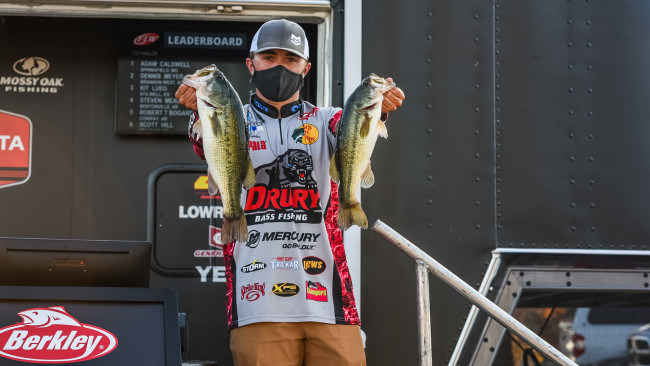 Consistency is the reason Cole Breeden slid his way up the leaderboard to make his first career top 10. The Drury University angler is utilizing both docks and offshore patterns for his catches of 12-2 on day one and 12-9 today.

Spotted bass are his main target on the lower end of the lake, but when he switches gears for largemouths he heads to docks in creeks with tons of shad around.

“Both the last two days I’ve caught multiple fish out schooling out deeper around timber,” Breeden says. “I’ve also caught some of my bigger ones up under docks up the lake.”

Though he’s only a junior in college, Breeden has put his time in on Table Rock simply for tournaments like this. While it may not be his favorite lake to fish, he’s happy to see his hard work pay off.

“I always come down here if I’m just fun fishing,” he says. “I make myself come here because we have a lot of lakes that are an hour or hour and a half away from Springfield that are really good like Bull Shoals, but I want to get better on this lake for future tournaments like this.”